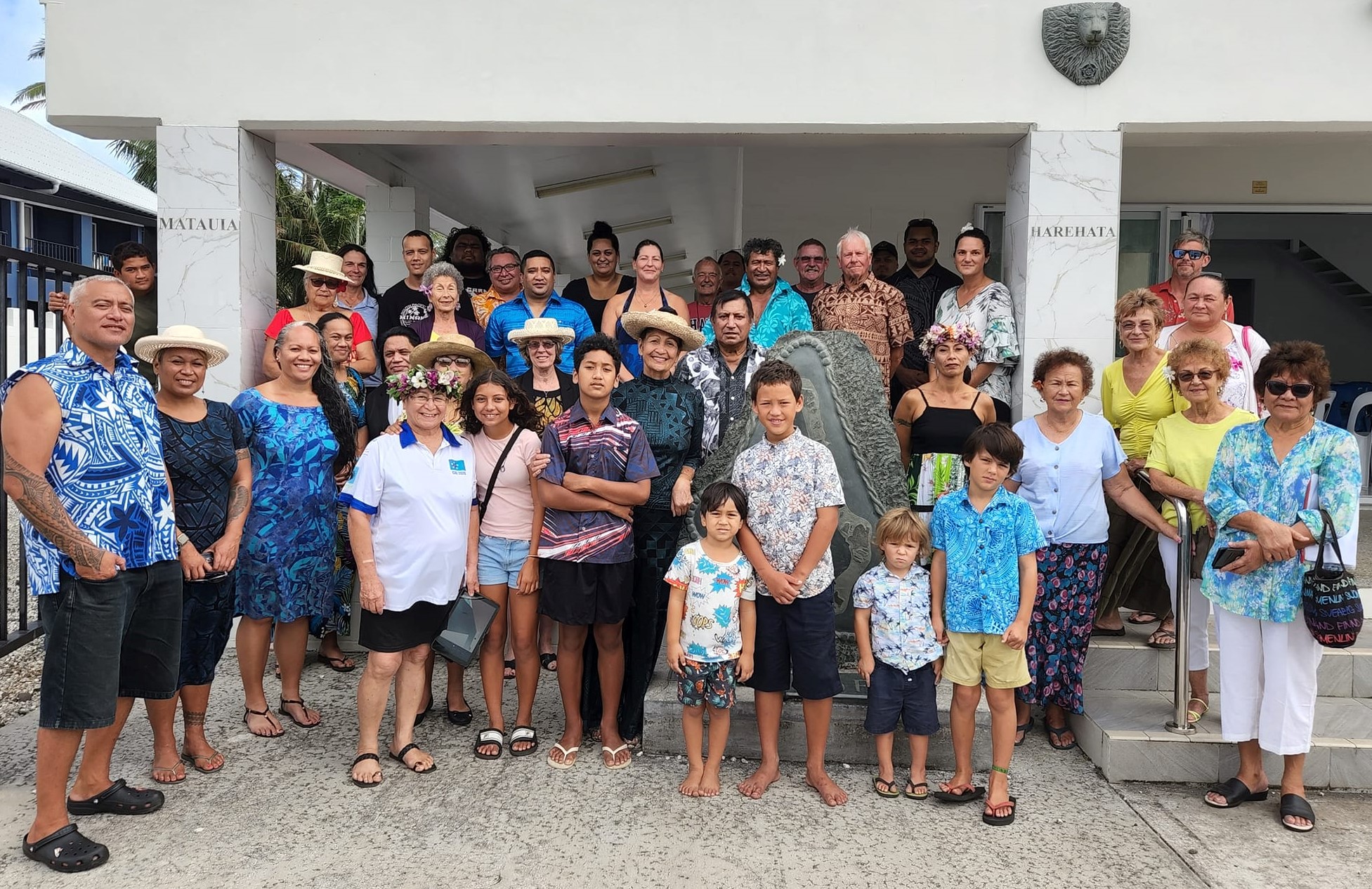 Palmerston Island conducted their raising of the flag and blessings ceremony on Sunday. 22092606

Three thousand people including athletes, managers and coaches have signed up to participate in the 2022 Cook Islands Games which kicked off yesterday afternoon with the bowling competition.

The 10 island representative teams are gearing up for the opening ceremony on Friday, with most of the groups having conducted blessings of their new sports uniforms, and flag raising ceremonies on Sunday.

Penrhyn Island is not taking part this year and team official Kuraiti Rasmussen said there had been and there is “too much going on” for them to prepare a team. However she said they would be fielding a team in the next Cook Islands Games.

The participating athletes will be battling it out in 25 codes – one up from the 2020 Games – with squash being the new inclusion.

Countless voluntary hours have gone into the preparations of the Games from the orders of hundreds of t-shirts, accommodation for the visitors, catering needs, transportation to the various venues and drinking water supply to name a few.

Each team have over 100 persons to cater for and organise, the island of Atiu has the highest number with approximately 460.

Listed is the number of each island’s expected participants.

Aitutaki – The assistant chairlady Atingata Tereu said they registered 300 plus athletes including 150 athletes flying in from Aitutaki starting this week and next week. The blessings of their uniforms were held last week on Friday for Rarotonga, and for Aitutaki on Sunday.

Atiu – The island’s representative Simiona Teiotu said they have about 460 (including coaches and managers) signed up and will be competing in all 25 codes. Their sports uniforms were blessed on Saturday morning at the St Joseph’s Cathedral and the team will host their flag raising ceremony today Wednesday at 5pm at the Atiu Hostel.

Mangaia – Secretary of the team, Annie Kauvarevai said they were “looking forward to the Games and are well prepared”. The second biggest team with 400 athletes and officials signed on will compete in all the sports events.

Manihiki – Island representative, Tunoa Kaina said they will be taking on all the sports codes and have a good number of approximately 300 athletes registered. A special blessing ceremony of uniforms was held on Sunday at the National Auditorium, in attendance was Member of Parliament Akaiti Puna, Ombudswoman Niki Rattle and CISNOC’s Owen Lewis. The flag raising ceremony will be held on Friday before the opening of the Games.

Mauke – Rima Moeka’a said the team had registered 350 athletes/managers and will participate in all codes except for cricket. A group of 40 (athletes/supporters) will arrive from Mauke. The blessing of uniforms was held on Sunday at the Orau O Mauke by Reverend Orometua Mautaiki Ngametua. The flag raising ceremony will be held on Friday, 7am sharp at the Apii Nikao school Hall where the team will be based.

Mitiaro – Look out for the Mighty Arrows in green. Tashi Tutai confirmedthey have 310 (athletes/coaches/managers) registered and will compete in 23 codes. Ten athletes from Mitiaro are flying in with their families to attend the Games. The raising of their flag and blessing was held on Sunday and a dedication church service was held yesterday at 7am at the Catholic Cathedral.

Palmerston Island – Team official Eirangi Marsters said: “Everyone is hyped up for the Games, we are looking forward to it and can’t wait.” The flag raising ceremony and blessing of their “fabulous uniforms” went smoothly on Sunday with the attendance of the King’s Representative Sir Tom Marsters and Lady Marsters. Palmerston is unfazed with their smaller number of 100 registrations and participation in 13 sports codes. “We are focused…” said Marsters.

Pukapuka/Nassau – The bold blue coloured uniforms stood out at the blessing ceremony on Monday night. The islands have 300 athletes ready to participate in 22 events, with seven from the Northern group island travelling to Rarotonga for the Games.

Rakahanga – Teina Taulu said they have 233 athletes registered to participate in all the events except for cycling, cricket and football. The island’s blessing and flag raising ceremonies were held on Sunday.

Rarotonga – The main island has 215 athletes who will participate in 22 codes. Team representative Makiroa Mitchell said the flag raising ceremony will be held at 4pm at “Aunty Mau” Munokoa’s residence on Friday prior to the opening of the Games. The group’s blessing ceremony was held on Sunday at the Avarua Church. Rarotonga’s headquarters are Mitchell’s residence at Avatiu and Aunty Mau’s home at Turamatuitui in Nikao.