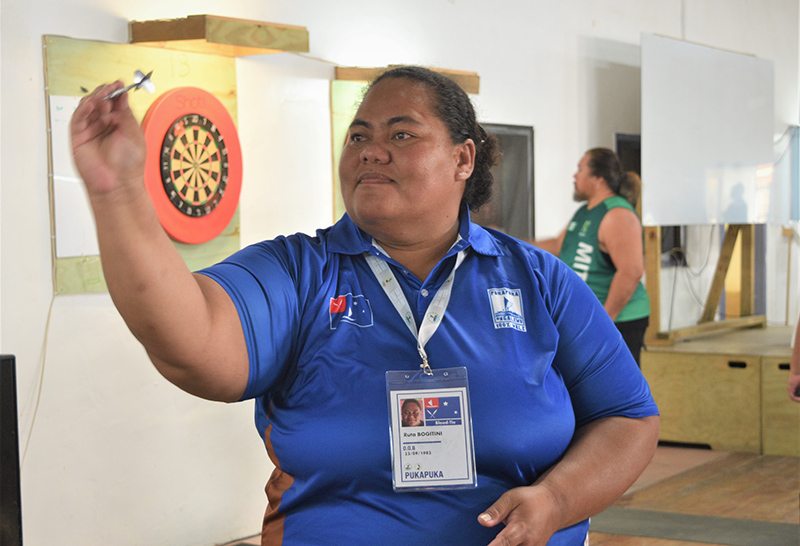 The first day of the darts competition had been “terrific”,  said  President of the Cook Islands Darts Federation, Kopurei Anguna.

Draws of the games have been rolling nicely with some games finishing early due to the calibre of the players who have improved so much since the first Games, said Anguna.

Games were finishing an hour earlier than expected which is why there had been a lull in between scheduled games so people took the opportunity to put in practice games.

“It has been absolutely awesome,” she said, all the islands have registered in the men and ladies open teams, but there are five islands who don’t have Masters teams since there are so many sports codes.

“Prior to the event, we had five workshops and technical meetings attended by delegates from each island to ensure that things ran well.

“The whole purpose of conducting these was to have this competition run really well.”

During competition no drinks or food are allowed inside the centre (you can eat and drink outside) and there is no music.

“It’s about the game, focusing on the game and concentrating on throwing the darts.”

Darts will be played every day until this coming Saturday when the finals will be on - the first three days are for the preliminary rounds, then the knockouts, semis and the finals.

Highlights from yesterday have been the “fantastic darts that have been thrown,” said Anguna.

“I’m really impressed with the Pukapuka team because they are young and nearly took Mitiaro out.”

Mitiaro being one of the top teams on Rarotonga - their games came down to the wire seven all, then Mitiaro won  - “so we are really proud of teams like that (Pukapuka).”

Pukapuka has a good team manager who has been keeping an eye on their players during the local competitions which shows the results and the improvement in their games, she said.

Anguna would like to thank Pastor Ngarima George who conducted the opening ceremony yesterday morning and the executive committee who has worked really hard.

Rotating the officials means now they have people working and some having a rest and vice versa.

She also commended the island teams who have been “really good” sending their queries through which were answered sand made clear to avoid arguments.

On behalf of the Darts Federation, Anguna would like to acknowledge the late Arere Tara who sadly passed away last week.

“He is one of the Presidents of the Aito club, and he is well revered amongst the darts players,” she said.