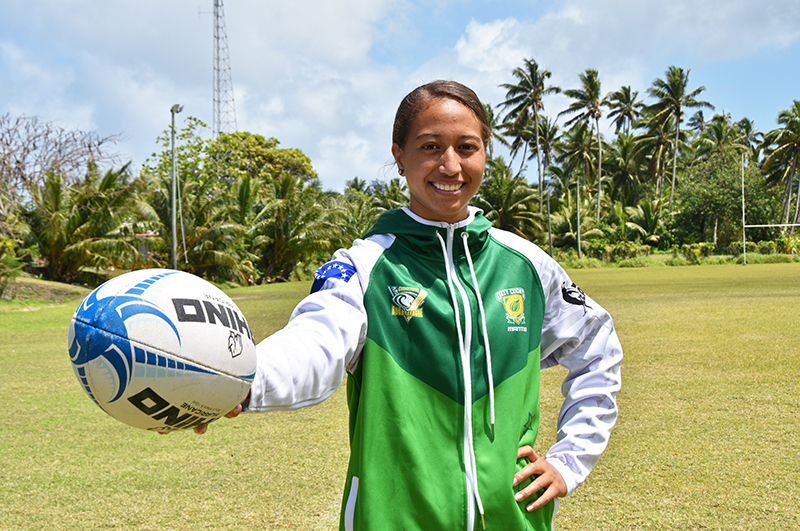 The 20-year-old Tehinnah Tatuava is the lone Cook Islands-based player in the national women’s Rugby League World Cup team. She hopes this will be a stepping stone in paving the way for local up and coming girls and women in rugby league.

Tehinnah Tatuava was cruising around the island on a Sunday with a friend when her phone started ringing.

Tatuava’s friend, who was carrying her phone, asked her to stop because the call was from New Zealand.

“It’s quite rare for me to get a call from NZ, but I was like ‘nah just ignore it’.”

But her friend felt it was something important, so they pulled over and Tatuava answered the phone.

“I just heard ‘congratulations’, and from there I just lost it, I was crying on the side of the road, which is such an embarrassing place to be.

“It felt so unreal, where I am now and getting that call up, all that emotion just came back.”

Tatuava is the lone Cook Islands based player included in the Cook Islands Moana team for the Women’s Rugby League World Cup to be played in England from November 1 to 19.

“To be honest it just feels so surreal … it’s been a rough journey, it wasn’t that easy, but it’s a lot of mental toughness, surrounding yourself with right people who help you get further and the belief of everyone in you, is what kind of pushes you to get further.

“I was fortunate enough to get people like that and just from that really gained my confidence to get where I am today.”

The upcoming World Cup will be Cook Islands’ third after 2003 and 2017 tournaments.

The Moana are placed in Group B alongside Australia, New Zealand and France.

The 20-year-old Tatuava’s inclusion in the national team is remarkable given her short rugby league journey.

She picked up the oval ball over a year ago after a successful stint in football where she represented the nation in age and senior levels.

“I only joined rugby league because I was forced by Patty (Patricia) Taea,” Tatuava says.

Taea, a former national sprinter, was putting together the Titikaveka Bulldogs team for the 2021 League Nines in Paradise in January last year, and approached Tatuava to try out the sport.

“I took up the opportunity and gave rugby league a go, and it quickly attracted my interest, and from there I just enjoyed it more and more. It wasn’t just the sport itself but the people, I was surrounded by people who made the sport a great experience.”

Transitioning from football to rugby league was a challenge, but a determined Tatuava saw it as an opportunity to test her sporting abilities.

“My first impression was ‘man, this is totally different’. The contacts would be totally brutal for me but I have always been a person who wants to take up any challenge.

“Sometimes I doubted myself, but you have got to have that extra push to challenge yourself, and that’s what got me into this, and with Patty’s encouragement and her support, I think that’s what pushed me more.”

Given the physicality of the game, Tatuava says she had to prepare herself for the hits and harden up mentally and physically.

“I told myself that if I wanted to be with rugby league, I have to train like a rugby player so I trained hard. Not many people these days do that much sacrifice, I definitely put the body there, conditioned and strengthened myself.”

“I just never stopped training and stuck to the group.”

After a successful debut in 2021, which included the first ever women’s 13s competition, Tatuava looked forward to the 2022 season ahead of the World Cup trials in June.

Unfortunately, this year’s season was cut short due to the Covid-19 pandemic, but the Cook Islands Women’s Rugby League committee came up with a new event – Conan’s Cup challenge – to keep the league spirit alive.

“The trial wasn’t such an easy road. Obviously, we couldn’t finish our season so that was a big bummer for us as we were unable to get more game time and contacts, but we still pushed ourselves through trainings.

“Fortunately, we had the Conan’s Cup that kind of pushed us more, and it also allowed the selectors to get a fair idea that there are girls here who are trialing for the team as well.”

Tatuava was one of three Rarotonga-based players who attended the trial in Sydney.

They were joined by New Zealand-based Daimzel Rongokea and Charlize Tumu-Makara who have also made the World Cup team.

“When we got the call up for the trial in Sydney, it was really tough financially, and all that stuff, but we had people along the way to help us get there. We had the support of the Women’s Rugby League committee like Patty, Maruia, Charlene, Peggy and Akaiti – without them it would have been impossible for us to be there.”

At the trials, Tatuava was pitted against more experienced players, but she remained focused on the task at hand.

“I was very nervous seeing them because most of these girls have grown up with the oval ball but I had to keep telling myself that there’re people who believe in you and just focus on what you need to do. Everyone has a job and role and you just do what you are supposed to do, don’t worry about other things.”

Her focus and determination paid off with the call up earlier this month.

Tatuava’s mum Theresa has been her biggest motivator, and always encouraged her in any sport she joined.

“My mum was super excited (when she heard about her selection). She was just so happy, even all the friends and families that followed my journey from day one, they were all stoked. I’m still receiving all the messages from people, so grateful.

“Being named in this team means a lot to me, and also to many others who have supported me on this journey. Words cannot describe how much this opportunity means.

“It was a tough experience to get this result, but with the overwhelming support of family and friends, the Titikaveka Women’s Bulldogs Club, and also the executives of the Women’s Rugby League, made it all worthwhile.”

Tatuava is looking forward to rubbing shoulders with Kiana Takairangi, one of the four players national coach Anthony Matua has retained from the 2017 world cup squad.

“She has been a role model,” she says. “I’m looking forward to playing against Apii Nicholls.”

The Rarotonga-born Nicholls will feature for the Kiwi Ferns.

“I know this is a huge step for me at an international stage, but I really am looking forward to the challenge and being the local-based player I hope to learn more from this experience, but also I hope that this will be a stepping stone in paving the way for our young up and coming girls and women in rugby league.”

Tatuava left the country for Australia with Women’s Rugby League executive Peggy Matapo last night. They were joined by Rongokea and Tumu-Makara in Auckland.

The team will leave for the United Kingdom on Monday.