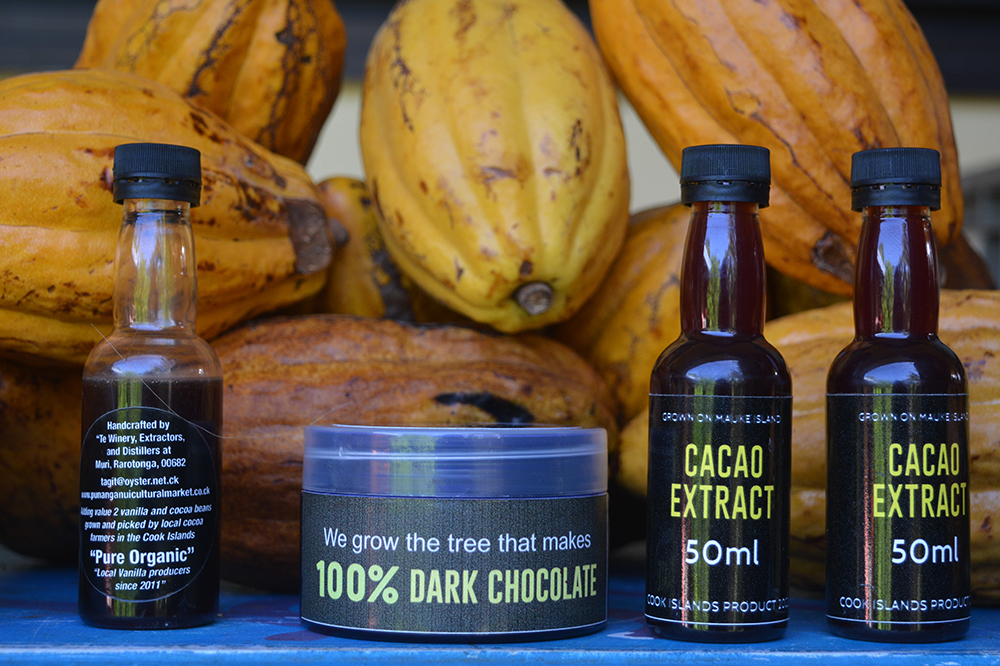 Chocolate in a tub and cocoa extract from the Cook Islands Chocolate Factory. 22100706

A Rarotonga farmer is three years into growing cocoa for his chocolate business and is just starting to see the fruits of his labour.

Tupe Short points to a story he cut out of one of Cook Islands News’ 2021 editions. The story is about Rarotonga’s past booming agriculture industry.

Being shipped out of Rarotonga in 1864 is 80,000 oranges, 500 bananas, 64 pounds of coffee and among other things, 2000 cocoa nuts, all organised by Ariki Kainaku. Short is a descendant of the renowned Ariki Kainuku from five generations ago.

“It’s in my blood,” Tupe says when he’s asked why he continues to grow at 82.

“Why would I retire, for what, for sitting around?

“If I can see the opportunity and I’m still fit and strong I go for it.”

Short along with his partners Framhein Koteka and Grant Young who run Cook Islands Chocolate Factory started planting the first cocoa seeds in Rarotonga three years ago and are now beginning to see the first fruits.

They’ve been making chocolate with cocoa supplied from Mauke and trees the Ministry of Agriculture planted about 40 years ago. But now they’re using the first of the cocoa they planted.

They work in partnership with local landowners. “Let us plant on your land and share the profits” is the premise of their pitch.

Koteka says cocoa was chosen because it was low maintenance and easy to grow.

“Cut the grass and that’s it, it just grows,” he says.

Koteka says it was also picked because of the “unlimited” amount of products you could make.

Chocolate is the obvious product, but Cook Islands Chocolate Factory have also infused cocoa with alcohol and made cocoa extract.

Even the factory’s chocolate is different from a normal block of Cadbury or Whitakers. Instead of being sold in a bar, it’s packed in a small tub with no added sugar or milk. The tub sells for $35 at the Saturday market which may seem steep, but Koteka says melted down and diluted it could make 10 bars of milk chocolate.

Koteka says the business needs to think differently about how they do things because they were in “last place” when it came to the chocolate business.

Production was still in the early stages and they were “cowboys in the factory”, he adds.

However, Short has high ambitions for the industry despite its grassroots stage.

He wants to eventually export and is encouraged by the Cook Islands’ new relationship with the United States.

“America is open to us, if we can supply America one day we will, there is an opportunity for us,” he says.

Short is looking for acres of land to use across Rarotonga and the outer islands to continue planting and to grow the industry.

He wants the recent fruits – and the money paid to growers – to encourage new landowners to partner in the operation.

He was the first landowner to get paid in Rarotonga and was given $200 for the few fruits harvested.

In a few years, Short expects Terepo to be paid around $1000 each season.

“This is just the beginning,” he says.

“What he got today was only from a few trees, not all his trees.

“Maybe next year or the year after all these trees will be loaded.

“Every Cook Islander who wishes to go our way will get some money from it.”

Koteka says the business was set up foremost for the growers to make money and making chocolate was just a byproduct.

Koteka says he learnt from the internet how to make chocolate and that had been the easy part of the operation.

“It’s not hard to make chocolate, it’s hard to plant.”

Terepo wants the whole nation to benefit from the cocoa.

He sees agriculture returning as a reliable backbone of the country’s economy, as it was in the 1860s.

“You will plant that tree and it will keep on growing, you will die, your children will come after, it will go for generations, they live longer than us.”