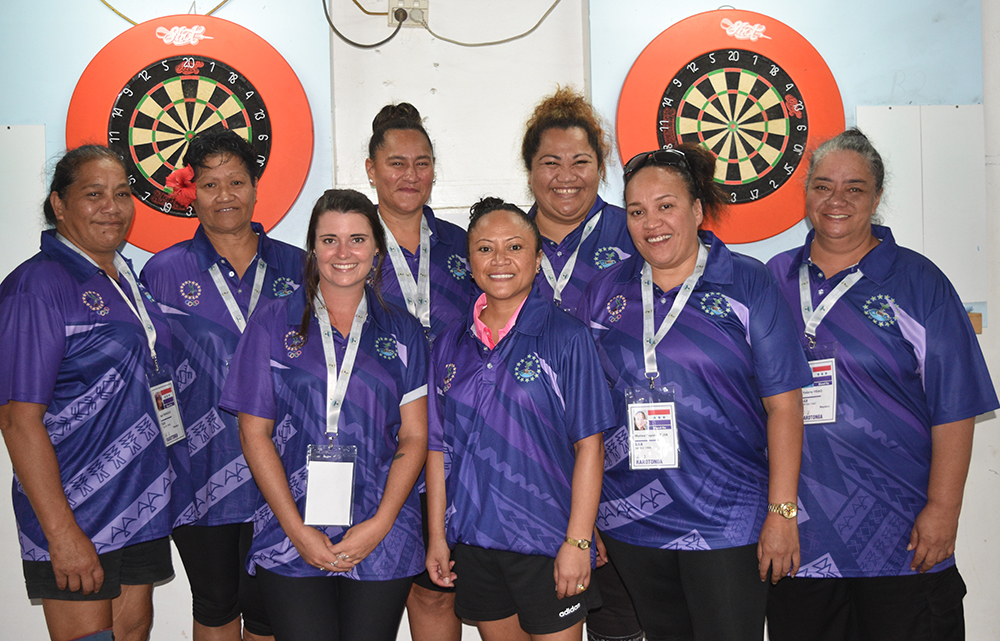 Rarotonga darts team participating in the 2022 Cook Islands Games. It’s so great watching all the athletes competing hard and then to see the comradery between them, writes Pastor Paul Kauri. 22100317

When our devotion is on our church, our culture, our career, even our family, instead of Jesus, then we’re on the slippery slope, writes Pastor Paul Kauri, lead pastor at The Arepua Gateway Assembly of God Church.

In our beautiful little Island we call paradise, the Cook Islands Games 2022 are well underway! It’s so great watching all the athletes competing hard and then to see the comradery as opponents from the different islands and codes embrace, congratulating each other, all for the love of the sport. So, it would come as no surprise then, that I should choose a theme for this week’s Church Talk that is relevant to our current national sporting event.

In his letter to Timothy, as he was nearing the end of his life, Paul the apostle wrote;

6 For I am already being poured out like a drink offering, and the time for my departure is near. 7 I have fought the good fight, I have finished the race, I have kept the faith. 8 Now there is in store for me the crown of righteousness, which the Lord, the righteous Judge, will award to me on that day—and not only to me, but also to all who have longed for his appearing. 2Tim 4:6-8

I am stirred by Paul’s words, “fought the good fight, finished the race, and kept the faith, now there is in store for me the crown …. which the Lord will award me on that day”.

I've been waking with the Lord now for 34 years, and it is very clear to me, both from scripture and in life, that not everyone finished their race well. I am aiming to be in the same category as the Apostle Paul.

King Saul was God’s chosen man. He started well and with much fervour serving the Lord, He was anointed and empowered by God and lead Israel well in the beginning, but then he became jealous of the very guy who was adding to his victory count (David), and by the end of his reign He consults a witch to find out the Word of the Lord, then ultimately took his own life! Very tragic.

In 1Kings 11 we read this account of King Solomon.

4 As Solomon grew old, his wives turned his heart after other gods, and his heart was not fully devoted to the Lord his God, as the heart of David his father had been. 5 He followed Ashtoreth the goddess of the Sidonians, and Molek the detestable god of the Ammonites. 1Kings 11:4-5

This must be one of, if not the most, saddest accounts of scripture, given who the text is referring to.

King Solomon started well, gaining much favour with God due to his request for wisdom to lead God’s people, and the Lord gave him the wisdom he asked for and blessed him with all that he didn’t ask for. What Solomon accomplished during his reign has never been achieved by anyone, before and since! The surrounding nations and those from afar came to consult from the nation of Israel, even seeking an alliance with her, all because of Solomon’s wisdom, that has never happened since, instead it’s much the opposite today.

Solomon is always referred to as the wisest man who ever lived, yet his finish was worse than King Saul’s! He finished his reign by building high places for foreign gods. In verse 9 of 1Kings 11 – we read that the Lord appeared to Solomon twice! Most of us don’t even get one visit in person from God, he got two!

All he had to do was read his own books and do what he wrote, yet again in Solomon we see an alarming warning for us today. If someone like Solomon, who was much wiser than us, and much more anointed than us, with two visits from God, can fall, then we ought to take heed lest we think we are immune to the subtly, slippery slope of sin.

Focused on the wrong thing

I’ve now been in full-time ministry for over 30 years and the number of people who once confessed Christ as Lord, but now deny Him, is more than I care to think of. I’ve observed at least two mistakes that even the most passionate Christian can fall into.

The first is what we focus on – Heb 12:1 – 2 states; “Therefore since we are surrounded by such a great cloud of witnesses, let us throw off everything that hinders and the sin that so easily entangles. And let us run with perseverance the race marked out for us, fixing our eyes on Jesus the Author and Finisher of faith!”

When we take our eyes off Jesus and focus on something else, the slip begins. Peter learnt this when he stepped off the boat onto the water toward Jesus. It was when he took his eyes off Jesus and saw the wind and the waves that he began to sink. Selah.

It can be just as subtle for us today. When our devotion is on our church, our culture, our career, even our family, instead of Jesus, then we’re on the slippery slope! When the very ministry He called us to, becomes our joy, then it is not the Joy of the Lord sustaining us, but the joy of what we’re doing that drives us. Even the very blessings of God can become an idol when we take our eyes off Jesus. We are best to keep our eyes on Him, making Him the reason for all I am and do.

The second is what we ignore – Proverbs 4:23 instructs us; Above all else guard your heart, for it is the well spring of life.

Just as concerning as the first mistake, are those who have become entrenched in the second mistake, they have become jaded, prickly, even bitter from the disappointments and hurts inflicted by others, which in turn grow into huge offenses.

Someone once said, ‘the longer you live the more scars you have from life’. That’s true but it’s also what you do with that pain that will make you Bitter or Better … the outcome is up to you. You decide. When we don’t guard our heart from the issues mentioned above, we affect whatever spring is coming out of us, with the issues that are in us, and everyone can taste it.

I see Christians who still go through the motions of prayer, reading their Bible and regular attendance and contribution to church, yet because they have ignored the offences, they have become hardened with no grace for others, no life in these important disciplines, it’s like they have calluses on their heart and their sensitivity has been dulled toward others, including Holy Spirit. This type of Christian living is simply being religious, when the heart is not healed from offences caused, or issues ignored.

When we ignore these issues, convincing ourselves to believe that they’re just too small to give any attention to, or if we just persevere with an “Onward Christian Soldier” attitude hoping the issue will cease affecting the attitude of my heart, then we are deceiving ourselves. Ignoring an issue doesn’t solve it, it just gives it time to grow. I write this from my own experience, and I praise God that He loved me too much to let me stay stuck!

If you see yourself in either of these two mistakes, then repent and fix your eyes on Jesus. Let Him be the motivation and reason for all you do.

In the next edition of Finishing Well, I’ll share two keys that can help us finish the race, keeping our faith, and joyful, not of the crown that will be awarded to us, but of the Glorious One who will award it to us.

Until then, keep stocking your passion for the Lord Jesus.