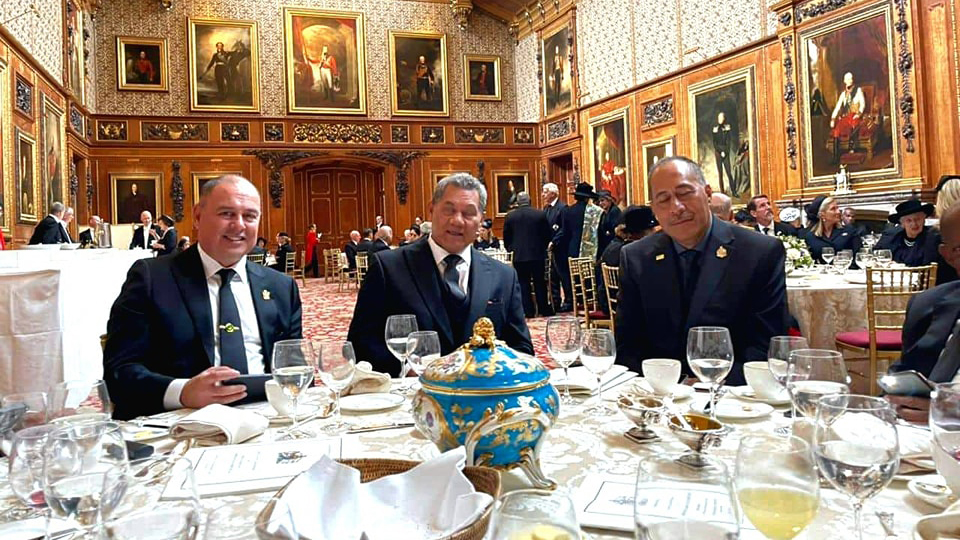 The State Funeral for Her Majesty Queen Elizabeth II took place in the United Kingdom at Westminster Abbey on Monday, September 19 at 11am (UK time). The service and ceremonial arrangements symbolised and paid tribute to the Queen’s extraordinary reign, and Her Majesty’s remarkable life of service as Head of State, Nation and Commonwealth.

“It was just incredible. What a privilege and honour to represent our nation,” explains PM Brown, thanking the King’s Representative (KR) His Excellency Sir Tom Marsters for allowing him to represent the country at the historic occasion.

With the very short notice and logistical difficulties it became impossible for Sir Tom to attend the Queen’s funeral in a manner befitting his status.

Brown, who attended the Green Climate Fund meeting in South Korea a week before the funeral, was able to then travel directly to London to represent the nation.

“It was a huge honour and privilege to be part of the occasion with other world leaders.”

PM Brown was privileged to be welcomed to the New Zealand High Commission in London along with a number of dignitaries, including the Maori King Tūheitia Potatau Te Wherowhero and Ngai Tahu kaumatua Sir Tipene O’Regan, Dame Kiri Tekanawa and others, as part of New Zealand Prime Minister Jacinda Arden’s delegation.

Along with other Pacific and world leaders, Brown was hosted to King Charles III’s reception at Buckingham Palace ahead of the Queen’s funeral service.

While waiting for the Royal Family, he enjoyed afternoon tea with Pacific leaders including the Prime Minister of Tuvalu Kausea Natano, Premier of Niue Dalton Emani Makamau Tagelagi and Prime Minister of Papua New Guinea James Marape and his wife.

Brown also met with a number of Pacific leaders whom he hadn’t seen in three years since the Covid-19 lockdown and also got to meet Australian PM Anthony Albanese and Canadian PM Justin Trudeau.

He was honoured to “chat” with Princess Anne and Prince Edward (The Earl of Wessex) – both of who have visited the Cook Islands – passing on the condolences of the nation and the “great admiration” the country has for the Queen.

On meeting Princess Anne, The Princess Royal, Brown expressed that the hall built in her honour – Princess Anne Hall at Tereora College when she visited Rarotonga in January 1974 with the Queen for the opening of the international airport – is still in good order and utilised by Tereora students.

He also shared with her that he was a student who used to sit in assembly in the same hall.

Prince Edward was surprised and had a chuckle when the Prime Minister revealed that he was the liaison officer during his royal visit to Rarotonga to open the Pacific Arts Festival in 1992.

Thousands travelled to Westminster to pay tribute to the Queen.

“Witnessing the phenomenal crowd of people lining up was such a humbling experience,” said Brown.

“To see so many people, both British and foreigners stand in a queue for up to 20 hours, just to spend a few seconds before Her Majesty’s coffin to pay their respects.”

On his first night at the hotel in London, he heard people’s voices below his room and walking outside at 4am he was astounded to see that the queue was lined up past their hotel which was over a kilometre away from Westminster.

People had already been in the queue for eight hours and were still some five hours away from reaching the Queen’s coffin.

“It was such an amazing thing to see. People were in good spirits and chatting quietly to themselves. It was so well behaved and respectful, and people were proud to be one of the many who were committed to seeing their Queen before she was laid to rest.”

On the day of the State Funeral at Westminster Abbey, Brown felt the mood of the people was sombre, but not the sadness or grief that he had witnessed in the people in the queue.

The pageantry in Westminster Abbey was steeped in history – the singing of the choir, the playing of the huge organ, the uniforms worn by the military – the symbolic occasion of the funeral ceremony itself, “is one of the greatest historical events the world will ever see”.

Some of Brown’s memorable moments include being able to view Her Majesty Lying in State – visiting leaders and VIPs were permitted to the viewing platform on the wall adjacent to the Queen’s coffin.

The experience was “very moving,” he explained.

“I was able to not only pay my respects, but also stay to watch the people file past and pay their respects,” looking over the heads of people who had queued for hours.

“From all walks of life they came, the young and the old – some in prams and some in wheelchairs, some in full military uniform, in casual clothes and some in suits. Some were crying, some were stern, some gave a smile, some crossed themselves, and some blew kisses.

“Everyone was respectful and bowed their heads and for that fleeting moment they could say, ‘I went and paid my respects to the Queen’.

“She was so obviously beloved by her people.”

Westminster has centuries of history, famous people are buried there, including Sir Isaac Newton, Charles Dickens, Queen Elizabeth I and King Henry VII, amongst others.

However, when Brown walked into the Abbey down the long walkway in front of thousands of people already seated, his heart was at home reflecting on the nation and people.

Brown was one of the privileged few who were seated directly behind the Royal Family and no more than 10 metres away from Her Majesty’s coffin.

As Big Ben tolled, Her Majesty the Queen’s coffin made its final journey through London.

His Majesty the King, and The Royal Family, followed Her Majesty’s coffin to Wellington Arch where it was lifted into State Hearse by the Grenadier Guards to travel to Windsor for the Committal Service at St George’s Chapel.

British officials insisted that the realm countries of the Queen’s (those that have the Queen as the Head of State) and only them would be the country leaders invited to be a part of the private ceremony at St George’s Chapel.

Brown was honoured to be at Windsor Castle for Her Majesty’s funeral.

“To be invited to the interment of the Queen next to her husband Prince Philip at Windsor Castle was very special.

“Again, it was such an honour and a privilege to travel the one hour to Windsor Castle to join the gathering that laid her to rest. Again, I was thinking of our nation at the time – representing all of us, was so special.”

A private burial for Queen Elizabeth II took place in The King George VI Memorial Chapel later that evening, conducted by the Dean of Windsor.

Brown said he was extremely impressed with the huge workload that all of the Royal Family, especially King Charles, carried in the days leading up to the Queen’s funeral – continuously out meeting people, showing their appreciation and saying “thank you” to those who came.

On behalf of the King’s Representative Sir Tom Marsters and the people of the Cook Islands, Brown left behind a recorded video message and a handwritten message in the condolence book at Lancaster House.

It reads – “She was our Queen too, she was there when our country was born as a modern country in 1965 as the Cook Islands. She became our Head of State. The Queen was much loved and admired by her people in the Cook Islands – she will be well remembered.”

He was accompanied to Lancaster House by Honourable Captain Ian Finlay, ambassador, and permanent representative of the Cook Islands to the International Maritime Organisation.

The Prime Minister arrives back home this weekend, in time to visit the market for a “proper” coffee.

Cook Islands will mark the passing of Queen Elizabeth II with a National Memorial Service and one-off public holiday on Friday, September 30.