A tribute to Papa John Tansley – A 57-year Rarotonga resident 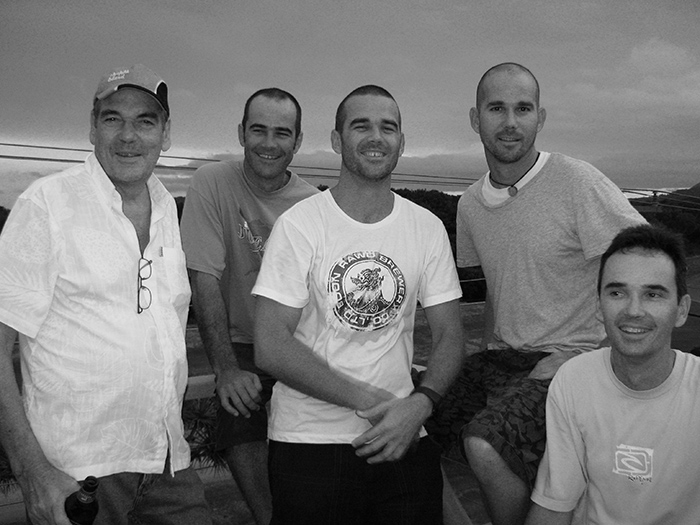 John Tansley passed away a week ago at his home by the lagoon in Avana. He always told us he wouldn’t leave Raro, and true to his word, he never will. By Craig Tansley (and brothers, Rod, Dale and Paul).

John Tansleywas part of a dying breed, ex-pat papa’a who came up here in the ‘50s and ‘60s for work – usually on government contracts – and liked it so much they never left. Most of them are gone now too, although many families remain, integrated into Cook Islands society.

Our dad arrived in 1965 from Dunedin. He was 23, and had been working for the New Zealand Justice Department. When he heard they were looking for someone to go to the Cook Islands for three years as Deputy Registrar of the High Court, he thought he could do with an adventure and applied for the job.

He was chosen and the department supplied him with a ticket on a ship, the Moana Roa, sailing out of Auckland. The international airport wasn’t there back then: it took five days to get here from New Zealand. He arrived on July 28, 1965. The Moana Roa couldn’t get closer than 500 metres from shore. It drifted outside the reef off Avarua while tenders unloaded passengers and supplies. The lighters were stored in the Union Steamship sheds where Trader Jacks now stands.

There was only one hotel on Raro at the time, just a few small single rooms strung out in a row housing single ex-pat government employees. He’d met our mother, Jeanette, just prior to moving here while she was on a long backpacking trip around New Zealand. After his first few months up here, he left to marry her in Sydney and bring her back to live. When they arrived together in early 1966 the Yankee (you still could see the wreck off Avarua for decades) was intact on the reef and being rescued before a cyclone smashed her up.

Communication with the outside world was next to impossible back then. There weren’t phones – except for one local party line with urgent international calls only able to be made through the local radio station – and mail was delivered on the monthly voyage of the Moana Roa. Someone from the post office would call out the addressee’s name from a platform just outside the post office. Our mother would gather there every month anxious to hear anything from back home.

Not long after he arrived (this was now 1966) our dad had to conduct the first comprehensive census of the Cook Islands, hitching a ride aboard a supply ship across the Southern and Northern Group. With his colleague, Jimmy Tamaiva, the two visited every inhabited island of the Cooks and counted every Cook Islander. There’s a whole generation too of Cook Islanders and ex-pats who were married by dad in his position – every child too, born in Raro during this period, was registered by dad.

Our parents fell in love with the Cooks. Dad wasn’t the type to watch a sunset over the sea, he put his back to most of them … but Raro got right in his blood. I think even way back then, he had the inkling he’d see out his days here. They joined the golf club and helped build the sailing club in Muri – the only places in those days that held liquor licenses (the sailing club would become the focus of our family activities for years to come). Dad extended his term here for another two years. They had their first child (Rod) in the hospital here in 1970, overseen by our uncle, the late, great Dr Joe Williams, then moved to Auckland the year after. But the big city wasn’t for them, not when Rarotonga was waiting. They moved back in 1975 and dad started a legal firm with Trevor Clarke.

My parents eventually went their separate ways, we (there’s four of us, all boys) moved with our mother to Australia; dad had a few years there, but for the most part, he never really left Rarotonga again. He was remarried to Kura von Hoff in 2002, and although they went their own way they remained in close contact.

Fifty-odd years seems a long time on an island you can drive around in 40 minutes, but it was big enough for him. He never really liked going over 50kph anyway (which could be a problem when he visited in Australia).

He wasn’t one for swimming in lagoons, but he liked the idea of living beside one. He may not have been one to husk coconuts or make fresh ika mata, but he did wear his pareu to bed every night for 57 years. And while he may not have shown much interest or any skills in preparing an umu, he was pretty handy with a backyard burn-off, though one burn-off cost him a quick trip to the hospital.

He was an introverted extrovert, or an extroverted introvert, depending on which way you look at it; he became treasurer of the Deep Sea Fishing Club even though he didn’t fish. He rarely ate at home, and was proud of the fact it was him who first brought his beloved Speights Old Dark into the Cook Islands. You would’ve seen him out a hundred times over the years, he didn’t smile a hell of a lot but he loved to laugh. You just had to work out what he found funny.

Rarotonga’s a different place these days to the one he first knew. But he loved this place with a passion that kept him here almost three times as long as he spent in his native New Zealand. He imparted this love for Raro in us boys, so it’ll always feel like home to us as well. Sometimes we wondered what it was for him: he didn’t watch the whales when they breached just beyond Trader Jacks (even though he was likely to be standing there), he didn’t care for rukau or poke and any risk of island dancing would see him head for the door. And when I’d tell him how much I loved the mountains you could see from the back of his place, he’d say: “they’re just mountains”.

For him, it wasn’t the blue of the lagoon, or the green of those beautiful mountains, or the smell of tipani or Tiare Maori. It was just home, the only place he ever wanted to be, and the place he’ll never, never leave.

A happy man who lived a simple but the best natural life one could just imagine. No everybody may be so lucky, indeed.