Wednesday 8 September 2021 | Written by Supplied | Published in Other Sports, Sports 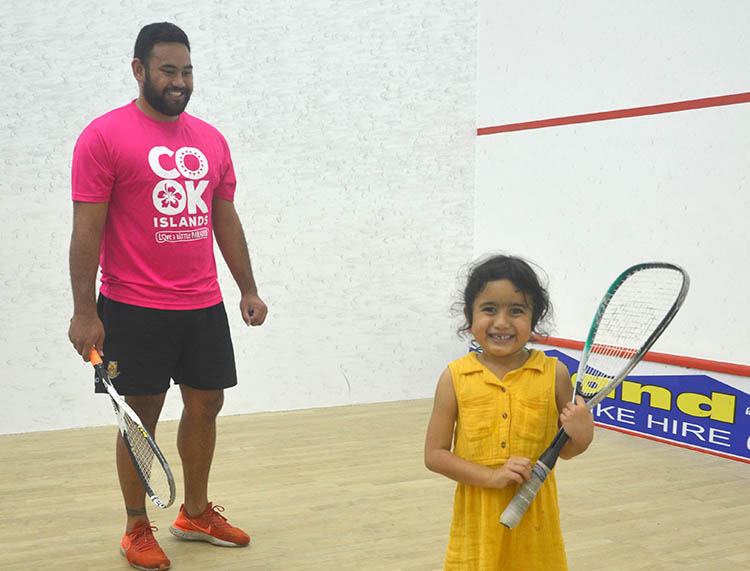 After more than 12 weeks on court and Covid-19 delays – squash freshmans shredded their newbie tags in the Freshman Squash Tournament finals.

Exhilarating finals on Thursday night last week had spectators on the edge of their seats and supporters in full voice of support as the tournament semi-final and finals were played out.

With 16 teams registered it was always going to be a tough battle for all teams.

However, body on the line matches saw team Kai n Co confidently led by twins Raita and Maeva Rongo, supported by their partners and colleagues, Team Tourism with a full contingent of Love a Little Paradise supporters and reserves players, the slick and vocal Vaiana’s Crossdressers, and the BSP Wild Force (one of three BSP teams in the tournament) crew rise to the occasion and into the top four playoff.

Rongo, who epitomised “taking one for the team”, or in his case taking four for the team.

Despite the daunting prospect of his solo challenge, young Maeva showed no nerves and without a word of complaint got on with the task making team Vaiana’s sweat.

However, team Vaiana’s were just too slick and determined to secure a final spot – although Maeva certainly gave them a great run and warm up for the final show of the night.

In the second semi-finals of the night it was the pink army of Team Tourism versus the green army of the BSP Wild Force, with neither side giving an inch in what resulted in a run of tie-breaker matches.

In the end, regular training sessions paid off for Team Tourism with young Niroa Kamana steering the team into the finals against team Vaiana, in what was an epic showdown that had everyone enthralled.

Each of the four final show-down matches were nail bitters with tie-breaker games bringing out the absolute best in every player with some long and ruthless rallies getting spectators off their seats.

It could have been anyone’s title to win – however it was the grit of Team Tourism that saw them across the line to win the overall competition 6-3 against the tenacious Vaiana’s crew.

Congratulations also to team Vaiana’s Crossdressers for a brilliant tournament bringing their A-game every week and contributing to helping newbie squash players get their eye-in the sport.

For his courageous one-man beast of a performance – Maeva Rongo of Kai n Co earned the most valuable male player of the tournament while Vainepoto Tangaroa of Team Tourism won this title for her great efforts on court.

Next on the squash calendar is the squash opens and nationals being planned for later in the year.