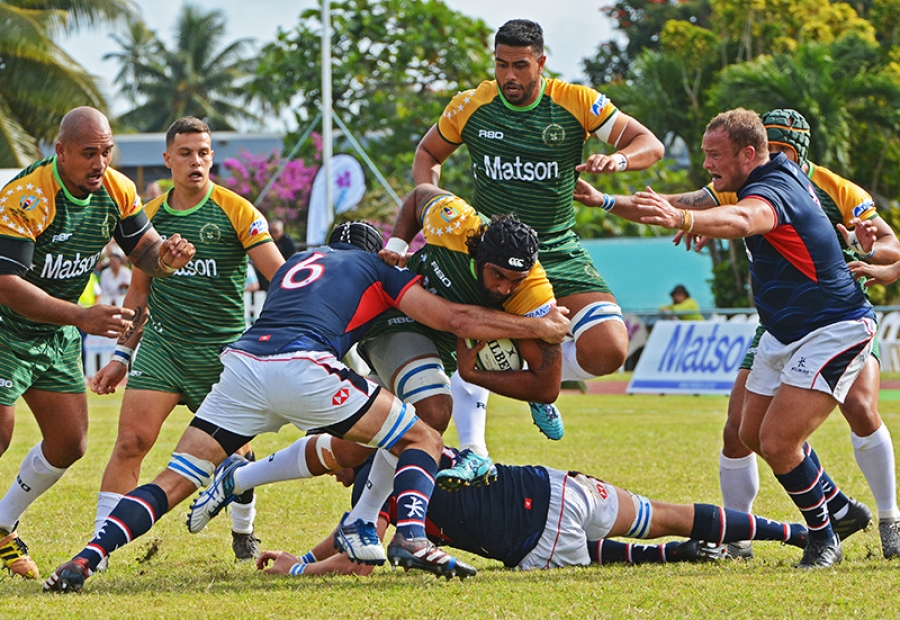 Cook Islands played Hong Kong in the Asia Pacific Rugby World Cup 2019 qualifiers in 2018 at the National Stadium in Nikao. The national side lost the home and away matches. 18070111

Tonga and Samoa major hurdles in Cook Islands’ bid to make it through to the 2023 Rugby World Cup.

Cook Islands is facing a tough challenge in a bid to qualify for the 2023 Rugby World Cup in France.

New Zealand, Australia and Fiji have already qualified from the Oceania region based on their 2019 Rugby World Cup placings.

This leaves two spots from the region – Oceania 1 and Oceania 2.

A home and away play-off between Tonga and Samoa in 2021 will determine the direct qualifier for the Oceania region – Oceania 1.

The loser will then play the Oceania Rugby Cup 2021 winner in the highest ranked team’s country with the eventual winner contesting Asia/Pacific as Oceania 2.

Cook Islands will need to win the Oceania Cup in a bid to remain in the run for a place in the 2023 World Cup.

However he is optimistic of the team’s chances.

The preparation for the first hurdle – the Oceania Cup – will begin with the appointment of a new 15s head coach in July or August, Teiotu said.

“The ultimate aim is to play in the upcoming tournament and ensure we remain in the run for the next stage of the World Cup qualifiers. It will be a challenging task.”

With 12 teams having secured their place at France 2023 courtesy of finishing in the top three of their respective pools at the World Cup 2019, the remaining eight places will be determined by a process of regional and cross-regional qualifiers.

The process will conclude with a four-team round-robin Final Qualification Tournament in November 2022 to determine the final qualifier.

The dates for the qualifying events in 2021 will be announced in due course and will be subject to an anticipated easing of the Covid-19 situation.

The announcement follows consultation with unions and regions in January 2020 and a full review of performance at Rugby World Cup 2019, where rankings upsets and the impressive performances in particular of Japan, Fiji, Uruguay, Tonga and Georgia cut the performance gap, with the average winning margin between established and emerging unions decreasing in comparison with 2015 benchmarks.

World Rugby chairman Sir Bill Beaumont said: “With the global pandemic having halted most rugby activity, confirmation of the global qualification process for Rugby World Cup 2023 provides a beacon of excitement for all, including players and fans.

“The process has been developed via full consultation with our regional associations and member unions will provide a genuine opportunity for full member unions to qualify for our showcase men’s 15s event. Maximising existing regional competitions, the process is good for regions and unions in managing costs for organisers and participants alike, which is important as we all recover from the global pandemic.”

“As the fight against the Covid-19 pandemic is about to be won, I welcome this optimistic prospect of reconnecting with the excitement of our sport. This is the start of our journey towards France 2023, which will be the best tournament ever delivered.”