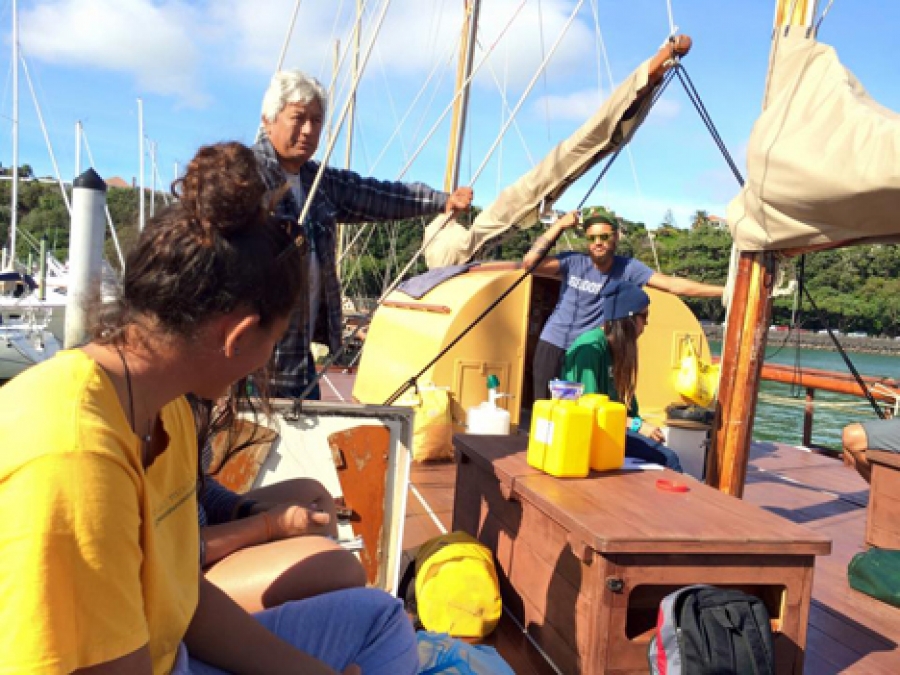 Vaka voyagers hoisted their sails yesterday and set out for Rarotonga for the inaugural ‘Te Manava Vaka Festival’ organised as part of the Cook Islands 50th anniversary celebrations.

Vaka Marumaru Atua has been berthed in Auckland after her epic voyage to Australia for the International Union for Conservation of Nature World Parks Congress.

On that voyage, Marumaru Atua was joined by a large fleet of traditional sailing vessels to share the Pacific nations’ message about the critical need to respect and protect important natural places.

On her journey home to Avana harbour, Marumaru Atua will be joined by five sister voyaging canoes from Fiji, Samoa and Tahiti and two canoes from Aotearoa.

Before leaving Auckland, vaka voyagers were hosted to a farewell function at the weekend at the Takitumu Hall.

The event was hosted by the New Zealand Cook Islands community for the crews of Marumaru Atua, Gaualofa and Haunui in Mangere, with voyagers from Tonga and Hawaii also part of the voyaging crews.

Cook Islands High Commissioner Tiki Matapo attended the farewell function on behalf of Government, sharing his appreciation to all the crew and voyaging societies for joining the Te Manava voyage and joining the Cook Islands celebration of the 50th anniversary of self-government at the Te Manava Vaka Festival.

The Te Manava Vaka festival is a celebration of the essence, heart and soul of the origins of vaka.

The festival will start with the official welcome ceremony, where more than 1000 school children from Rarotonga schools will form the welcome party on shore and perform a pe’e composed especially for this festival.

There will also be an education day held, stone laying ceremony, an exhibition of 50 photographic prints of the vaka at the National Museum, gala event and a family night where the premier of the "Te Mana O Te Moana" voyage documentary film will be shown along with cultural performances by each vaka.

The fleet will then sail to Aitutaki for two days to continue the festival in Aitutaki.

Marumaru Atua plans to sail to Ngaputoru with Haunui and Te Matau after Aitutaki.

Voyaging vaka Te Au O Tonga, currently berthed in Aitutaki and regarded as the ‘mother’ of Pacific voyaging, will take centre stage at the festival.