Big work-out challenge: Competing against others, challenging himself 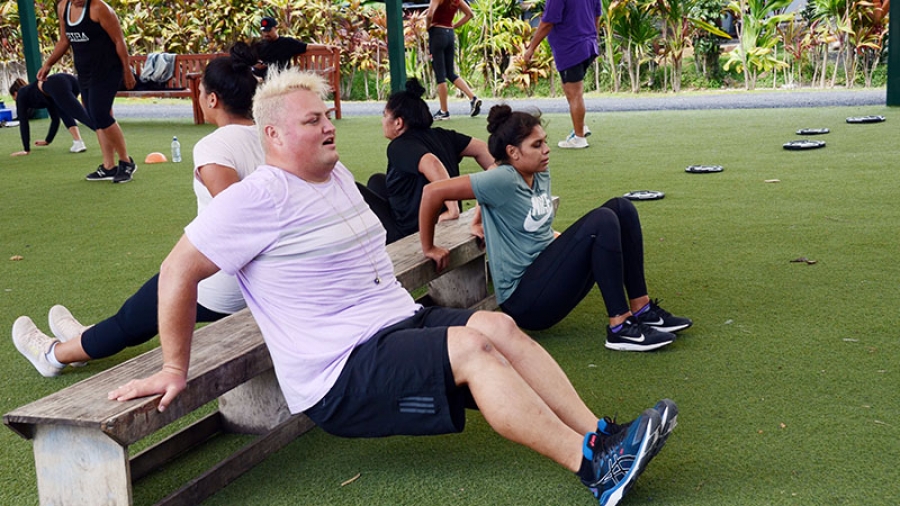 Daniel Fisher exercises during his lunch break at the Tupapa domes. 20081802

In a time of work stress during the Covid shutdown, one office worker decided to make a critical life change – and now he’s encouraging others to do the same.

Daniel Fisher is hard to miss in a crowd: when he signed up for an exercise challenge, he had blond hair, stood at 180cm and weighed in at 152kg.

That was nine weeks ago. Now, he’s still tall, still blonde – but has slimmed down a little to 144kg.

His 7.7kg weight loss (2.9 per cent of his body-fat) has now won him the Toa Beast camp award.

Fisher does not shy from acknowledging his noticeable frame and had never worried about the imposing size of his physique.

“I have never been one who cared about my body size – in fact I liked being the ‘biggest person in the room’, it gave me a sense of dominance.”

But then, a few years ago on a trip to Aitutaki,his impression of himself changed. He was talking with some friends about all things vegan, body fat, keto and health.

“They had embarked on a healthy lifestyle change a few years earlier, eating healthier and exercising and I could see how much happier they both were,” he said.

“And after seeing their before and after images, I was blown away.”

Fisher considers himself lucky he has healthy friends, motivated colleagues, and an “overactive” mother. “So I had heaps of motivation to do something.”

Then the challenge of the coronavirus shutdown came – and suddenly his work at Cook Islands Tourism changed.

“Quickly we shifted our focus away from international marketing and into leading the communications support for the Covid-19 Cook Islands government’s response.

“We were now working in an, at times, stressful online environment – keyboard warriors were coming out left right and centre.”

When the Johnson’s challenge began at Tupapa gym, Fisher jumped at the chance to some healthy positivity into his work days.

“It helped that my friend group and work colleagues were also signing up (some of them regular to the challenges). Joining with people you know, especially if it's your first challenge and you’re unfamiliar to the class format really helps.”

One of his challenges was being conscious of the food that he was eating.

“I never really paid much attention to portion sizes, sugar content, calories, until I joined, I was watching what I was eating to assist with my weight loss and health.”

“It has now turned into something automatic where I am constantly in a mindset of, whether I really need to eat something and if it is part of my daily planned meal.”

He was worried his fitness level would be way behind the group.

“If there is one thing I hate, it’s when everyone has finished an exercise set and they all come to encourage those still completing. I don’t like that kind of attention and this has always put me off joining group challenges.”

Learning how to do a burpee and execute the technique are one of his highlights from the programme.

At first his burpee was a weird scaled down version of one, but as the weeks progressed, he grasped the technique closer to what it should be.

“I’m about 80 per cent there, but am at a much better execution point where I actually like doing burpees now – just not too many!”

Another focal point was his attempt at a personal goal.

“For whatever the session sets bring us, I try to push the number of reps for a certain exercise I can do without scaling it down, for example, doing 20 straight push-ups with knees off the ground.

“This may not sound like a lot, but personal wins for me keep encouraging me to go back and do better in the next session.”

The vibe and feel of the Tupapa Centre and the people who participate was another highlight for him: “You make so many new friends who encourage and motivate you to get through the challenge and make those healthy lifestyle choices.”

At the start he had felt like an outsider in the wrong place; “Now I feel right at home there.”

He encourages others to join in, “it is such a fun and worthwhile step to living a healthier and happier life.”

“If you’re thinking about joining the next one, that just means you should.”