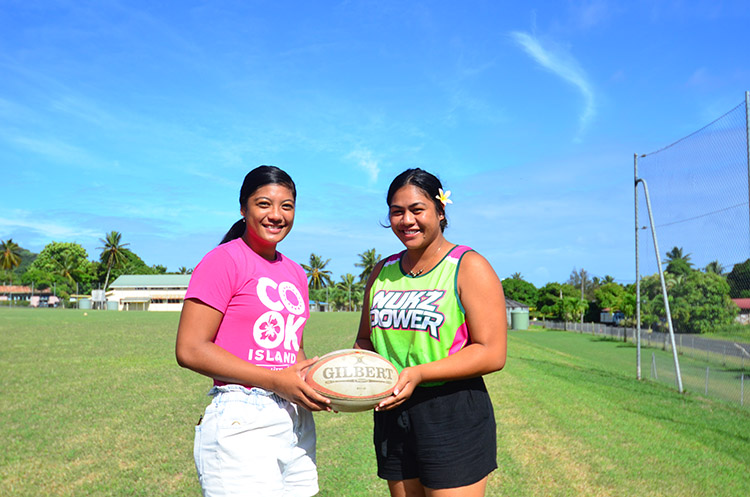 Two upcoming female players, who picked up the oval ball after successful netball stints, have been recognised for their skills after being offered contracts to join a North Otago-based rugby union team.

Budding rugby players Daimzel Rongokea and Charlize Tumu-Makara will soon be leaving Rarotonga to pursue their careers in Otago, Dunedin.

They have been offered contracts to play for the Waitaki ‘Wahine’ Rugby Club in the domestic (Dunedin) competition.

Nineteen-year-old Rongokea, who took up rugby about four months ago, is excited to see what New Zealand has to offer her in terms of her budding career.

The Arorangi player is grateful for the opportunity, given that she has only been involved in the sport for a short period of time.

Rongokea started her sport career as a netball player at the age of 14 but became invested in rugby during the 2020 Cook Islands Games where she was able to expand her skills and recognise her passion and potential in the sport.

Since becoming involved in rugby, she has played at the Cook Islands Games in the Sevens and league Nines.

Rongokea also played at the Raro Sevens held in December 2020. Lately she featured for the Arorangi Bears rugby league team in the domestic league competition.

Her goal upon accepting the contract overseas is to learn as much as she can and bring home what she has learnt to share with the young ones.

Many sacrifices have been made to get her to the path she is on, but she credits much of her success to the support of her family and friends who have encouraged her always.

Charlize Tumu-Makara’s advice to young athletes looking to pursue a career in the sports world is “don’t give up and keep pushing yourself”.

Brought up in New Zealand, Tumu-Makara began playing rugby when she was only five years old.

For a period of time during her childhood she decided to put rugby on pause for the ‘round ball’ and became an esteemed netball player up until her last years of high school where she made the decision to pick up rugby again.

Tumu-Makara has only excelled in the sport, and now at the age of 20, she has played for the Auckland Rugby Under-19 Sevens team, New Zealand Tag, and the Auckland Vulcans rugby league team.

She now is an avid player for the Tupapa Panthers Rugby Union where she has been recognised for her skills and potential and offered the opportunity to extend her career in New Zealand.

“This is a great stepping stone for me,” says Tumu-Makara who is most looking forward to “playing with different skill levels and experiencing all that a career overseas has to offer”.

The pair will join the team this month until June/July or potentially October depending on their performances on the field.

Upwards is the only appearing direction for these two promising athletes who are looking forward to the opportunity and experience and to representing their country from afar.