Monday 8 March 2021 | Written by Supplied | Published in Other Sports, Sports 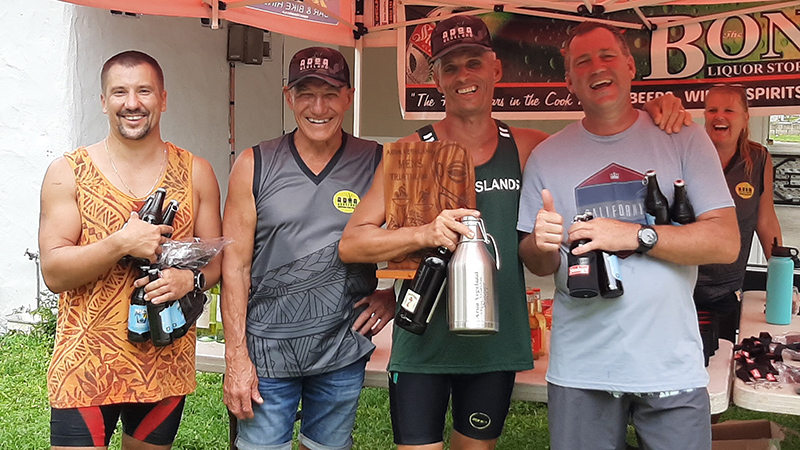 This unique event breaks away from the traditional triathlon and offers competitors the chance to do more of an adventure race, comprising a stand-up paddle board, a mountain bike and bush run and a further road run.

An hour before the event started, a squall blew in and competitors sheltered from the heavy rain nervously contemplating the afternoon ahead.

On cue the sun came out for the start of the race which was a 1.2 kilometre Stand Up Paddle Board. Conditions were pretty tricky and the often calm lagoon had a decent current and a fair wind to contend with.

First out of the water was Jakub Postrzygacz followed by Marco Cotroneo with Jason Moorfield hot on his heals.

The men swiftly transitioned to their mountain bikes for a course that was described as gruelling. They climbed up into the bush behind Takitumu conservation area, visited several of the water intakes, with numerous stream crossings and mud pits. Part of the way through the bike course they had a steep hill run to complete before coming back down to the disused Sheraton site and more mud!

The defending champion Jason Moorfield took the lead on the first part of the bike course, but couldn’t keep challenger Roland Neururer far enough away and as they came into the second transition, the latter had a tight 24 second lead.  The final leg was a fast-paced run up to the backroad in Tikioki and then a big sprint down into the finish area.

Spectators cheered hard as Roland Neururer took the title in a time of 1 hour 34 minutes and 17 seconds, with Moorfield less than a minute behind in 1:35:14.  Jakub Postrzygacz came in third in a time of 1:42:10.

Cook Islands Triathlon Association would like to thank their generous sponsors Aroa Vegeland, The Bond Store and Ariki Adventures who loaned all the paddle boards for the day as well as the Raina family for their kindness in allowing the use of area around Enua Manea Hall and all the marshals who gave their time to keep our athletes safe.

For those who like the idea of this type of challenge, the triathlon committee are looking at holding a larger adventure race later in the year, watch this space for details as they emerge.

The next event in the Cook Islands Triathlon’s club calendar is the always popular Women’s Triathlon 400/16/4 on March 20, followed by the Club Championship Tinman Triathlon 1200/31/10 on May 15. Contact Jennie George jennieinraro@gmail.com for entry forms.