Monday 29 March 2021 | Written by Supplied | Published in Other Sports, Sports 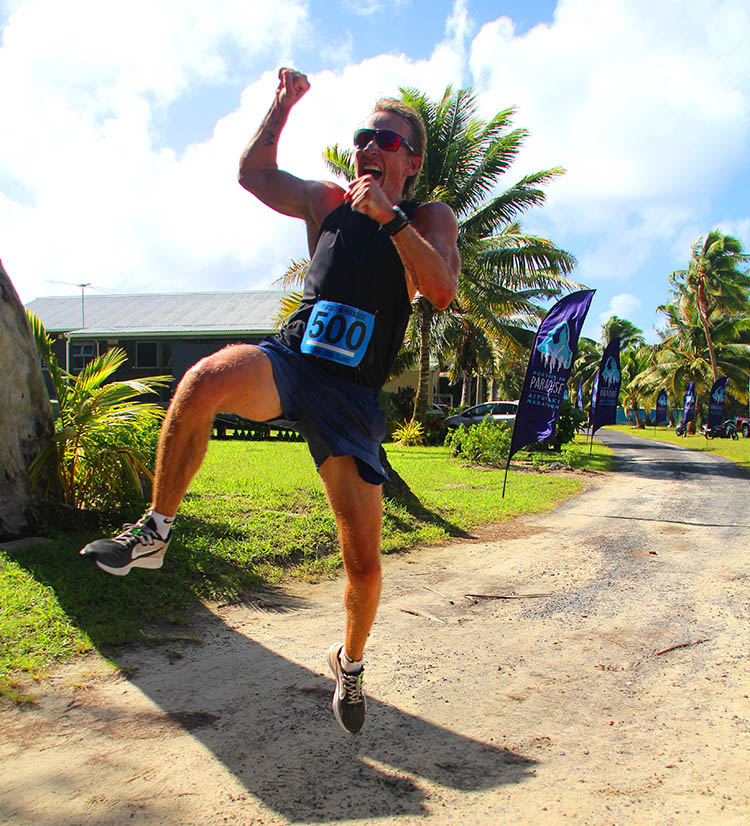 In his solo marathon run across the paradise island of Aitutaki, runner David Street highlighted that sometimes the sweetest victories are beating personal goals over opponents.

No doubt David wanted to smash off more than 46 seconds off his previous time however he commented later at the event prize giving that the marathon course reversal from previous years had not made the marathon any less of a gruelling.

“I encourage you to take on the marathon – it is challenging so you will need to prepare for it, but it will be worth it,” he said.

Meanwhile in the shorter course races of the marathon, five runners and walkers set out to achieve their personal goals across the half marathon.

Four athletes set out first, with the islands new doctor Ye Zaw Moe allowed to start six minutes after the pack after looking after his patients in hospital.

Overall winner of the 21km, Aitutaki based Sherid Carter, had set herself the goal of clocking in a sub 2-hour time and she was clearly thrilled when she crossed the finish line in 1:59:22.

Anna Glassie still looked fresh as she crossed the line in 2:47:00 to finish second place with the island’s doctor Moe taking third place with a time of 3:30:11 and ticking up his 21km race as the start of his training to take on the full 42km marathon race next year.

Husband and wife walking team Tony Wearing and Kathy Numanga-Wearing had selfless goals on their minds using their inclusion in the Aitutaki Marathon as a platform to raise awareness and funds to support the work of the Cook Islands Down Syndrome Association.

The real race competition was in the 10km course where 18 Rarotonga and Aitutaki athletes with varying race goals from winning outright, setting a new race record to just completing their first ever run competition. All the goals were achieved with Rarotonga-based Fiji born and trained runner Rupeni Mataitoga carving up the short course to set a blistering new race record of 42:14 minutes to lift the 10km winner’s trophy.

Hot on his heels were impressive Aitutaki athletes in fitness instructor Dani Adendorff who finished in 52:56 and her young charge Joshua Orika who took out third place in 56:15.

While the trio took top honours in the short course, age grade race placers received certificates for their amazing efforts – the real winners are the people and island of Aitutaki who were 100 per cent behind the event and were magic hosts.

Last but not least, meitaki atupaka to all the competitors that supported this local event especially to the Aitutaki athletes for taking ownership of their island named event and to Rarotonga participants who not only raced in Aitutaki but brought their wallets to help boost the island economy in these times of global change.