Eleventh year in a row for Neururer

Tuesday 18 May 2021 | Written by Supplied | Published in Other Sports, Sports 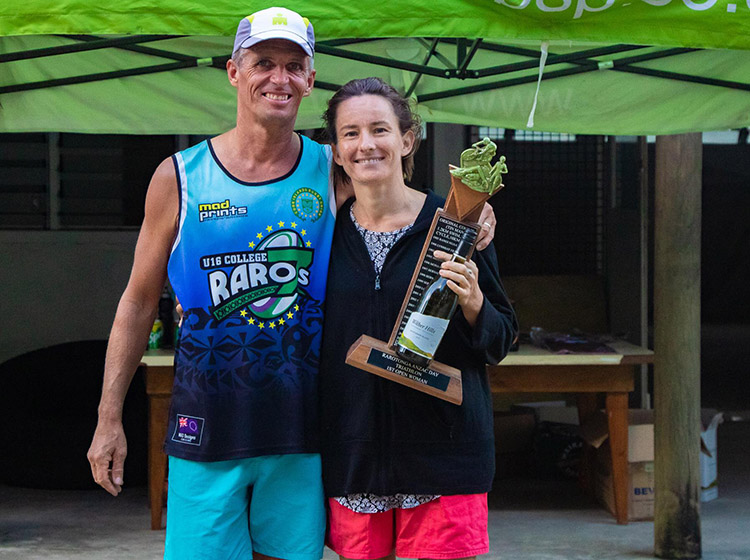 Roland Neururer retained the Tinman Competition title in the 39th edition of the annual event over the weekend.

Over 40 triathletes took part in the Cook Islands Triathlon Association’s last event of the season held on Saturday at Tikioki Tri Site.

It was a windy afternoon as the competitors gathered, some excited and some nervous in the lagoon in Tikioki.

The 1.2 kilometre swim was challenging with a current and surface chop which soon saw the competitors spread out. One of the major highlights of the day was to see 13-year-old Darius Allsworth exit the water first in a time of 20 minutes and 08 seconds just ahead of swim coach Tem Strickland and triathlete Roland Neururer. The strength and ability of this young swimmer is just absolutely incredible and to see him lead this swim in tough conditions was superb.

As one by one they completed the arduous swim the competitors either transitioned onto their bikes or tagged their team mates for the start of the cycle leg.

The 31km course took them through Muri, Matavera, Tupapa, across town and out to Nikao Beach Video store, where they turned and came back via the same route to Titikaveka.

What had started as a pleasant cycle with a nice tailwind became more gruelling at the turn with a challenging headwind making the return trip a hard effort.

At the end of the cycle leg, Neururer had taken the lead, with Jason Moorfield and Jakub Postrygacz in hot pursuit, and in the teams section Mike Tate took the lead with a super strong cycle, ready to tag teammate Fiona Pekapo with cyclists Terry Glassie and Andrew Whittaker also putting in great performances coming in not far behind.

In the ladies’ competition Adrianna Skurosz was leading after a strong swim and was holding off a strong challenge from Alyce Edwards and Tarina Moorfield.

The 10km run was also a mental challenge for the competitors as they completed five loops of Tikioki from the tri site and round the back road.  Individual competitors were by this time feeling the pain of the swim and the cycle and the challenge and fatigue were evident, whilst teams tagged their final athlete for the last leg and the crowd enjoyed watching and cheering everyone as they went past on each lap.

The first to finish in a time of 2:02:28 was Masters Sportsman of the Year Roland Neururer who crossed the line victorious in this competition for the 11th year in a row.

Jason Moorfield took a worthy second place in 2:12:11 and Mike Carr who was competing in the Tinman competition for the 33rd time had a solid run and moved up the field to take third place in a time of 2:22:07.

The ladies finished in the formation they had held all afternoon, with Adrianna Skurosz taking the win for the second year in a row in a time of 2:12:43 ahead of Alyce Edwards in second place in 2:23:10 and Tarina Moorfield in third with a time of 2:32:57. In the team’s event a great run by Rupeni Mataitoga built on the solid performances of Andrew Logan and Terry Glassie to shoot their team The Laughing Unknowns into first place in a time of 2:04:34, second place team Don’t Burst My Bubble made up of Tem Strickland, Mike Tate and Fiona Pekapo clocked 2:07:06 and third place went to Splash, Flash and Dash, Seychelle Carter, Andrew Whittaker and Lucile Meyer, in a time of 2:15:46.

There was one all junior team comprising Darius Allsworth, Koru McDonald and Maya Postrygacz, all three competitors aged just 13 and 14 years old, who completed the whole course in an excellent time of 2:21:14.

Cook Islands Triathlon president Roland Neururer said: “Congratulations go to every competitor for their achievements and showing excellent camaraderie and sportsmanship.  It is hugely fun and satisfying to complete a distance event such as the Tinman, it takes personal courage and discipline to train for an event like this, and it is so great to see so many people involved.”

The Cook Islands Triathlon Association is sincerely grateful for the most generous sponsorship they have received for all their events this year from BSP Bank, The Bond Store, Ride Rarotonga, Aro Vegeland, Paradise Supplies, PTS, KPMG, Ariki Adventure, HiTech Solution, Ride Raro and very appreciative of the Raina family who have given use of the area at Enua Manea Hall.

In addition, the Association would like to extend its heartfelt thanks to all the volunteers who have assisted with marshalling, water safety, timekeeping, photography, videography, and race day assistance throughout the season.  Without the support of these sponsors and supporters, events could not happen.