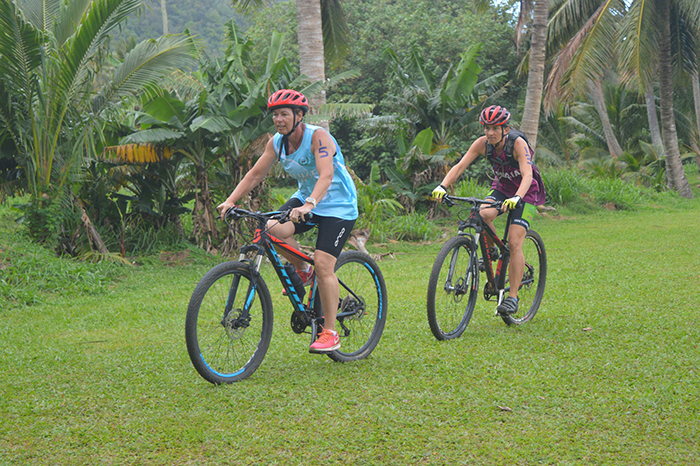 Lucy McDonald’s, front, win over all the females was the biggest surprise of the day, beating the likes of Dani Adendorff, Adrianna Skurosz and Tarina Moorfield. CISNOC/22101730

Event manager Kevin Henderson said, apart from the results displaying potential of junior riders, masters competitors showed how dominant they were on Saturday.

“Some entering under the opens and the others in their categories, the top three in the masters men’s category, were only eight seconds apart, and it could easily have been a different result.

“A masters woman beating all the open women as well, you have to give it your all during the race because any hesitation throughout could be the difference of one or more seconds as you can see by the results.”

Lucy McDonald’s win over all the females was the biggest surprise of the day, beating the likes of Dani Adendorff, Adrianna Skurosz and Tarina Moorfield, Henderson said.

Unfortunately, Alyce Edwards succumbed to an illness the day before and was gutted to be unable to compete in what she has been so dominant in over the past few years.

Likewise, Darius Allsworth succumbed to a health problem after an extraordinary two weeks of competing, and was unable to compete in the U18 category.

Henderson described the event as a simple race of “the fastest cyclists wins in their category”.

Each individual starts 30 seconds apart, and must not draft behind another competitor or vehicle.

Only at the end is the winner known, by deducting their start time from their finishing time - the fastest time wins.

Henderson said, with the games finished, the season is over.

“We might do some fun events during November or get back to all the jobs that were put aside during the last month.

“Everyone is a volunteer, with an event like this it’s basically only two organisers, three to five marshals (10 to 12 would be nice) and two time keepers.

“Defining the race is the easy part; preparing what needs to be done is the challenging part.

“Will traffic and spectators be a problem; where are the danger zones; how do we mark the course, what are the marshal’s responsibilities, how shall the time keeping and recording be done.

“For this event and even the mountain bike race, getting marshals is the biggest challenge, but they turn up or get absconded on the day, which makes it stressful as you are trying your best to keep everyone as safe as possible and it is constantly going through your mind up to the last minute.

“You know how many you would like, but invariably you get by with half the numbers and a lot of prayers for their safety.”

Henderson thanked all those who had helped over the past week; public; volunteers; marshals; landowners; growers; CISNOC and sponsors.