The queen of happiness 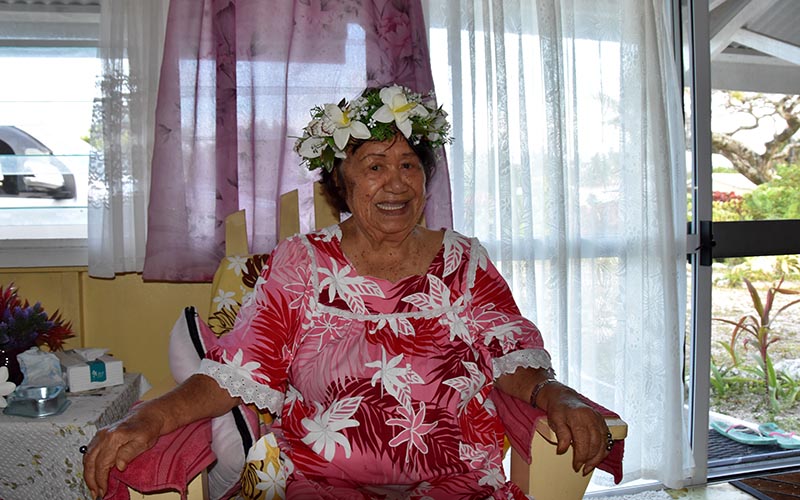 At 92, Te Maeu O Te Rangi Teikamata Ariki Mii O’Bryan is the oldest and one of the longest reigning royals in the Cook Islands. Mama Mii hesitantly accepted the title in 1985 but has grown into the role, doing her best for the people. Losirene Lacanivalu met the island’s queen on her first-ever visit to Mitiaro.

Te Maeu O Te Rangi Teikamata Ariki Mii holds memories of her loved ones and the moment spent with them close to her heart.

This is evident from the photographs hanging on the walls of her Mitiaro home.

There are pictures of her families, visits to other islands and wedding chronicling her childhood in Mitiaro and years of travel around the Cook Islands.

Mama Mii or Aunty Mii, as she is lovingly known on the island, also has a special notebook where she notes very important dates and events.

One of her important meetings last week was a visit from the Cook Islands Tourism and Cook Islands News team who were on the island to explore and experience its offerings.

The trip also included meeting and interviewing well-known personalities on the island.

Mama Mii starts her story, recalling all the wonderful and beautiful days she spent on the island as child.

She recalls spending time at the Vai Marere and Vai Nauri caves, climbing up the highest peak to jump into the water for a swim.

“There are places you can climb up and jump into the water. I enjoyed it,” Mama Mii says with a big smile.

Born and bred in Mitiaro, Mama Mii grew up in a family of 13 siblings. She is the only surviving member after her sister passed away last year.

Back then, Mama Mii’s family would travel back and forth from Mitiaro to attend to her mother’s medical needs and despite the circumstances, she says her parents always kept them together.

While in Rarotonga, Mama Mii started working at the CITC main shop where she met her husband, the late Stuart O’Bryan.

O’Bryan was a returning serviceman of the Second World War. Some of the captured memories Mama Mii keeps around her home in Mitiaro. 20112714

Her late husband took up a government role, representing the State in the Pa Enua.

Mama Mii says the role was timely as it helped O’Bryan understand the island people, culture and the language. This would prepare him for his retirement years in Mitiaro.

“He became a government representative in Manihiki, Rakahanga, Palmerston and Pukapuka, he knew and understood our ways of life in the islands. We would go by boat those days. I enjoyed my time with the people. We spent eight years in the north while stationed in Manihiki.”

After retiring, Mama Mii says her late husband wanted to return to Mitiaro for peaceful and quiet life.

“He always said he liked the peace and quiet and when we retire, we go back to Mitiaro. My mother was still alive those days, papa passed away when he was 70 and I came back to take care of her.”

“When my mother passed away (at the age of 99) the tribe on Mitiaro they wanted me to take the title and I told them ‘no, there are other people in the family or in New Zealand they could get the title’.

“They had a meeting so I kept quiet and accepted the role. February 20,1985 was the day I was given the title of Te Maeu Ote Rangi Teikamata Ariki and it’s been about 35 years now.”

She is one of the longest serving members of the House of Ariki.

Mama Mii says life on the island is still peaceful, quiet and beautiful. “We are getting help from government especially the older people. We also have young ones in government offices, some are school teacher. We are happy.”