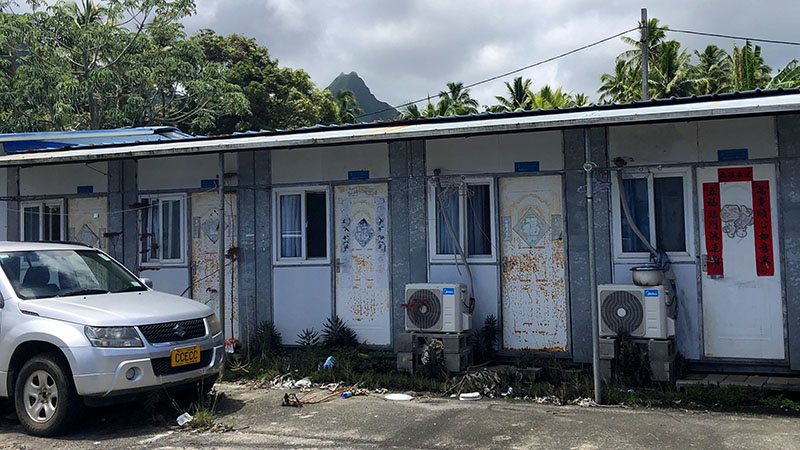 Once buzzing with activity, the former CCECC compound in Avarua has gone into disrepair. EMMANUEL SAMOGLOU / 20111348

For nearly two years, Government has been trying to recoup $13 million from a Chinese firm, which is alleged to have carried out shoddy work on the nation’s largest-ever infrastructure project. Its fight continues with no sign of a resolution in sight.

The China Civil Engineering Construction Corporation (CCECC) was engaged to carry out the replacement of pipes in Rarotonga’s aged water network infrastructure eight years ago.

The project was stage one of Te Mato Vai – billed as the largest infrastructure project in the nation’s history, with a price tag of just under $90 million.

At the time, Te Mato Vai was described as a triumph of diplomacy that saw the governments of the Cook Islands, New Zealand, and China combine their efforts to form a “tripartite agreement” to deliver an aid project. It was said to be the first time China had engaged in such an arrangement.

By late 2014, that exuberance began to dissipate.

First, a whistleblower – who was working on the project as a material quality specialist - came forward with claims that the quality of work being undertaken by the CCECC was falling below internationally accepted standards.

Fast forward to September 2018, and a report by a New Zealand based consultancy called Opus –now known as WSP – would bring to light further claims of poor workmanship and raised questions over the materials used by the Chinese firm.

Government responded to the report with a full-scale offensive, calling on the CCECC to replace 17kms of pipeline laid by the company. But CCECC disputed the findings in the report. CCECC workers carrying out work on the replacement of Rarotonga’s rings mains in 2014. EMMANUEL SAMOGLOU / 20111345

That’s when lawyers got involved.

During a recent interview with Cook Islands News, Prime Minister Mark Brown – who was Deputy PM under the Henry Puna-led Cook Islands Party Government at the time – was asked about the status of the Government’s attempts to recoup costs for the remedial work.

“Our dispute is with the contractor in terms of the quality of the work, and the work done that wasn’t up to the standard we signed up to in the contract,” Brown said.

“At the moment we are in arbitration, and our lawyers are talking with their lawyers.”

When the findings in the 2018 report were made public, government announced it would be going ahead with the necessary repairs on the work carried out by CCECC to keep Te Mato Vai on track.

An $11.2 million contract for the work was awarded to local company Landholdings Ltd – which had completed a water reticulation improvement project in Avarua in 2013.

Landholding’s work – which finished earlier this year - took the price tag for stage one of Te Mato Vai well above $60 million, and what was originally budgeted.

Planned funding for the project was to come from the Cook Islands government, a $15 million grant from the NZ government, and a $23.5 million loan from China’s Export Import Bank at a favourable interest rate.

In carrying out the remedial work to address what he described as substandard work by the CCECC, Mark Brown said government would not go further into debt.

“We were fortunate with New Zealand that they were able to come in and provide support to remedy the deficiencies that we identified in the ring mains, so that hasn’t slowed down the project,” he said.

In effect, New Zealand taxpayers ended up paying the bulk of the bill for the alleged inferior workmanship by the CCECC.

Discussions between the Ministry of Finance and Economic Management and the CCECC began in 2018 to address the Government’s grievances.

Officials from the CCECC flatly denied the government’s allegations and the claims made in WSP report. “The pipeline as is, has been built and tested, approved, paid for and accepted as completed,” a CCECC project manager told Cook Islands News at the time.

Despite the gulf between both sides, it was reported that Financial Secretary Garth Henderson described initial talks as a “friendly” consultation.

Formal arbitration began in March this year, and has also involved the Crown Law office. But the government has been silent on how the process is panning out.

At the outset, the Opposition Democratic Party called for an independent public inquiry into Te Mato Vai to address the CIP Government’s handling of the project and its escalating budget. The Demos also questioned Government in Parliament on the matter.

Opposition leader Tina Browne said her Party has never been updated on the remediation process by MFEM.

“… keeping the Opposition informed, should be a normal part of MFEM responsibility to Members of Parliament who represent thousands of Cook Islands voters, who are the taxpayers of this country,” Browne said. “That fact seems to escape MFEM and other government entities.”

Regarding the Party’s calls for an inquiry, Browne said: “There has been no response, which is not surprising and is par for the course for this government. Ignore the public and all calls for transparency.”

Cook Islands News attempted to receive comment from the CCECC for this article.

A visit to the company’s office in Avarua discovered only one staff member remaining in the country. His knowledge of the project was minimal, as he said he participated solely on the building of Apii Nikao – widely regarded as a successful project undertaken by the CCECC and commended by the community. Prime Minister Mark Brown said he remains optimistic that a resolution can be reached. And he is quick to point out the dispute hasn’t eroded the country’s relationship with China.

“Our relation with China is still very strong, and we see it as valuable in the long term for us, so we’ll continue building that strong relationship with China,” he said.

“But we’re also very clear that when it comes to business, we want business done in a certain way. The Cook Islands has put in place certain standards, certain policies, that we want local companies engaged as part of any donor’s contribution to us, including New Zealand and Australia.

“One way or the other, there will a conclusion to this matter and we’ll see how it transpires from there.”

A series of questions sent to Henderson earlier this week for an update on the arbitration process were not responded to by the time this edition went to print. However, MFEM did respond to one query sent by this newspaper.

Since April, the Government has spent $25 million on the Covid-19 wage subsidy, a form of financial assistance it describes as “lifeline support”. At that rate, recouping the full cost of the remedial work from the CCECC could provide an additional four months of vital Covid-19 financial assistance to Cook Islanders without forcing the Government to take on more debt.