‘People are leaving the country and not coming back’ 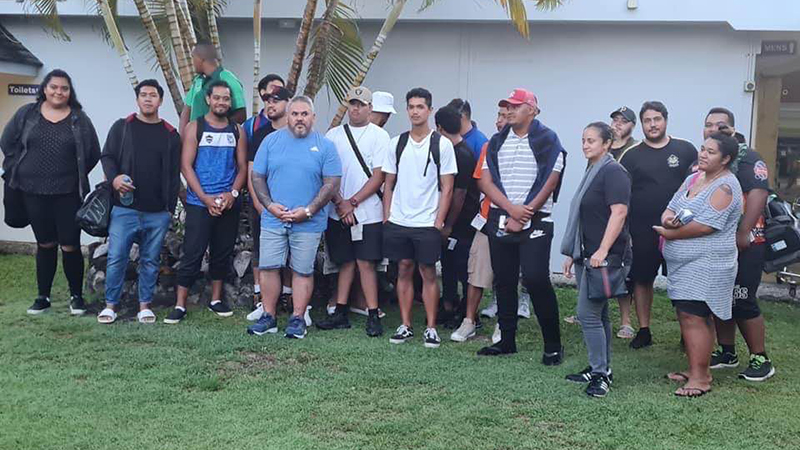 Another intake of Cook Islanders bound for the freezing works. Photo: Sel Napa/21021957

Close to 1000 people, mostly Cook Islanders, have left the country since the one-way travel bubble opened, sparking fears of another exodus of labour overseas.

Brittany Miles is flying to New Zealand next Saturday and doesn’t know when she’ll come back, she’s one of many Cook Islands resident leaving in search of better opportunities.

In return, only 290 people have taken up the offer to fly to the Cook Islands.

An average flight to New Zealand has carried 103 passengers compared with an average of only 48 people flying into Rarotonga. This is taking into account the three flights that arrived here without passengers, in light of Covid-19 community cases in New Zealand.

If these people do not return, the Cook Islands will be roughly four per cent smaller than before the bubble opened.

The trend is the opposite of what the Government expected. Prime Minister Mark Brown thought Cook Islanders returning home would outweigh the number leaving. On January 18, Brown said, “I don’t expect a great exodus of Cook Islanders once one-way quarantine is open. In fact, I expect the opposite to happen with more people coming here with the knowledge that if they do choose to go back to New Zealand, they don’t have to go into quarantine.”

According to Kairangi Samuela, the principal immigration officer, some departing passengers are returning university students accompanied by families. Others are returning for medical check-ups or are New Zealand pension holders.

But some, like Miles, are leaving and do not know when they will return.

Until last week, she was working in the tourism industry for Pacific Resort Hotel Group in operations. She thinks tourism could bounce back slowly, so she’s going to New Zealand to look for new opportunities.

“It’s just a personal feeling,” she says. “Everyone is doing it rough at the moment so will people want to travel?”

Instead, Miles and her child will try to make better use of their time. She will use the opportunity to upskill by studying journalism and editing at the New Zealand Institute of Business Studies.

However, she says her main reason for going to New Zealand is not for study, but just to see what opportunities are available in the country.

Miles has family in Rarotonga so doesn’t expect to be gone forever, but she doesn’t know when she will come back.

From 1996 to 2016 the Cook Islands saw over 19,000 residents leaving the country, a number more than the current population size.

But government statistician Taggy Tangimetua says taking the accumulated excess of -19,946 from 1996 to 2016 to mean that 19,000 left the country “is misleading”.

“You have to take the population into consideration. So, say if you take the 2016 year net of -1171 and given the resident population (mid-year) is 15000, the rate of migration would be 78, meaning for every 1000 people in this country at the beginning of the 2016, 78 will have moved out by the end of the year. Don’t forget you are counting the movement of people crossing the border (a person could have travelled multiple times during the period).”

In the past decade, Cook Islands population had to be bolstered by people from overseas taking up jobs here, mostly in the tourism sector. It’s only been in the past five years that more Cook Islands residents have chosen to settle at home than leave.

Fletcher Melvin, like many others, does not want to slip back into losing the population overseas.

And he is fearing the worst if a two-way travel bubble cannot be established.

“Without the money injected from tourism, people will be forced to look for work outside of the Cook Islands.

“It’s all about just how long businesses will last.”

Despite Cook Islanders leaving to work in fruit picking or freezing works temporarily, Melvin says many permanent Cook Islanders living in New Zealand would have left with that same thought in mind.

Melvin is concerned if more people leave, the country will suffer from a labour shortage. Scott, who is also the general manager of Muri Beach Club Hotel, says those leaving are young able-bodied people, who play important roles as labourers, or as fill-in staff for the tourism industry.

“If there is no definite open date, and families are struggling to pay off debt or survive, then they have no choice but to seek other opportunities.”

She says there are plenty of work opportunities with attractive incentives.

Scott says orchards and freezing works are screaming for help, with accommodation and meals often provided as part of the deal.

“Our worry is that these young people do not return after their placement.”

She says businesses downsizing from depopulation or staff being stretched in working roles is also a very real possibility.

Scott is also concerned that once the travel bubble opens, accommodation providers will not be able to keep up with demand because they won’t be able to find staff to fill needed positions.

This means it’s unlikely the country will be injected with cash from those working in orchard or freezing works.

Melvin says remittance culture is much bigger in other Pacific nations but for Cook Islanders, “it’s just as easy for family members to live in New Zealand as for money to be sent back home”.

Leader of the Opposition, Tina Pupuke Browne says while she understands why young people are going to New Zealand to work, she hopes they will return to the Cook Islands after completing their contract.

“The worry of course is that our young people will leave in droves, already a good number have left with more intending to leave and we repeat the sad experience of 1996. We lost 6,000 of our people and our population has never recovered.”

Browne says there’s a lot of talk about being creative, utilising technology and diversifying away from tourism and she believes government agencies like the Business Trade and Investment Board should be doing more to push for better technology.

“What happened to the ‘…superhighway for Cook Islands to world’s largest internet hub.’

“I know of young people who are trying to forge ahead in their respective businesses and are heavy users of the internet, but prices are still amongst the highest in the Pacific region.”