Our $3 among world’s finest 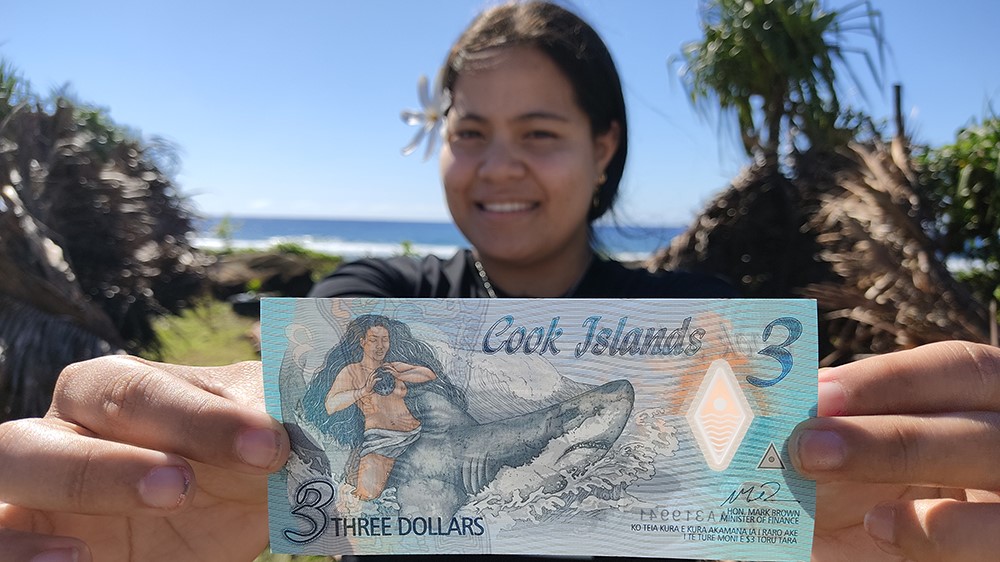 Anne Benson from the Ministry of Finance and Economic Management’s stall at the BTIB’s Trade Days on Tuesday, holds up the new $3 note. PHOTO: CALEB FOTHERINGHAM/21080381

The Cook Islands three dollar note with the iconic image of Ina and the shark is one of 23 notes around the world running for the banknote of the year.

The International Bank Note Society which runs the competition issues a single award for the banknote of the year. The award is given to a note with artistic merit, imaginative design and new security features.

Among the 23 notes nominated for this award is the Cook Islands’ iconic $3 note.

The $3 note has been in circulation since 1987 and the note has been in hot demand as a collector’s item. The note is the only one of its type that circulates as legal tender with the New Zealand dollar.

The design of the bill has been adopted from a painting by late artist Rick Welland, who was from California and visited Rarotonga in 1962. He fell in love with the island and decided to make it his new home.

His daughter Diya Welland was delighted to hear the iconic $3 note being considered for the banknote of the year award.

“It’s pretty awesome. I just think it’s a really neat painting, I remember when Dad first painted it, it was part of a series he did. My favourite was actually Ina and the moko but people loved the shark better,” said Diya.

Diya said she always takes the three-dollar note with her whenever she was travelling.

“To me, it’s a beautiful painting, I believe dad was pretty proud of his work.”

However, Diya said she wondered if the international recognition of the note came more from the fact it was a three-dollar bill than the painting itself.

The note was given a fresh look in August when the Ministry of Finance and Economic Management (MFEM) restocked the bill after it had been largely depleted from its popularity as a tourist souvenir.

When the new note came out, a statement from the Office of the Prime Minister said it was cleaner, greener and more durable than the note’s 1987 predecessor.

In August, Prime Minister, Mark Brown said, “we are pleased to have our much sought-after $3 note re-imagined on De La Rue’s polymer substrate”.

“The iconic image of Ina and the Shark has long been a part of Cook Islands folklore and legend, and I am delighted with the design of the new note.”

Brown said the note will continue to be a collector’s item that visitors to the Cook Islands can take home to remind them of our country.

The Society is still accepting nominations from its members at banknoteoftheyear@theibns.org. The winner is usually announced in the spring.

The legend of Ina and the shark

Folklore has it that in Eastern Polynesia there was a god of the Ocean called Tinirau. He lived on a floating island called the Sacred Isle Motu-Tpau and his loved one Ina is told of in a song from the island of Mangaia.

The story goes that Ina plunged into the sea to search for Tinirau and first called on the fish to help her. They were too small and she was tipped into the shallow lagoon. Four attempts got her no further than the outer reef and the fish that tried to help her were permanently marked by the beatings she gave them. Then a sea-going shark agreed to carry her on his back.

On the journey she felt thirsty and the shark raised his dorsal fin so that she could crack her first coconut. This she did and satisfied her thirst. Again she grew thirsty and this time, as depicted in the design, she cracked the coconut on the shark's head. At once the shark shook her off and dived and she was only rescued when Tekea the Great, the king of all sharks, rose from the depths, drove off the other sharks, and took her to Tinirau’s island. However the blow she gave to her first benefactor raised a bump on the shark’s head and to this day that is called Ina’s bump. Supplied by Ben Bergman