Embarking on a second homecoming 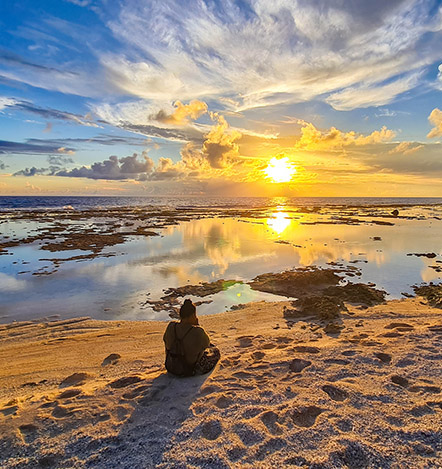 At the beginning of 2019, Vainepoto Tangaroa traded her mum’s slice of paradise, Gisborne and Tokomaru Bay on the East Coast of the North Island of New Zealand, for that of her late father’s, the beautiful Cook Islands. Tangaroa tells associate editor Katrina Tanirau why it’s a decision she’s glad she made.

Losing her father, the late Upokoina Tangaroa when she was eight-years-old had an enormous impact on Vainepoto Tangaroa.

However, it wasn’t until she was transitioning from being a teenager into adulthood that she realised the far reaching effects of such a loss.

For many years, Tangaroa blocked out memories of her dad – a coping mechanism she says came from a need to protect herself and her mental health.

And her mum Patricia Tangaroa nee Milner, did a stellar job of raising her and her brothers.

But like so many who find themselves wading through life looking for the missing pieces of their puzzle, Tangaroa’s desire to know who she really was, couldn’t be ignored.

Therapy, being resentful and angry, thoughts of suicide and binge drinking simply didn’t help the situation.

Admittedly “freaked out” about leaving Gisborne where she grew up and went to school on the East Coast of the North Island of New Zealand, in order to grow she knew that it was time to return to the home of her dad and the place where she was born – the Cook Islands.

In January 2019, Tangaroa jumped on a plane and travelled to Rarotonga to take up a job at Cook Islands Tourism.

She felt the fear and did it anyway and from there the journey of growth, healing and discovery began.

The love story of Vainepoto Tangaroa’s mum Patricia Tangaroa nee Milner and her dad Upokoina Tangaroa is a tale that could easily provide the basis for an award-winning novel or movie.

It started “30 odd years ago”, when a young Patricia decided to take a trip to Rarotonga to play squash.

“My mum was pretty impulsive, a far cry from the person she is today,” Tangaroa says.

“She had played squash with Sue Marsters, whose husband was Peter Marsters, he trained Upokoina Tangaroa, my father, for boxing in the South Pacific Games.”

Sue and Peter Marsters took her mum out for dinner to the Edgewater and there sitting at the table was Upokoina Tangaroa – a skilled rugby player and boxer from Akatokamanava/Mauke and Aitutaki.

“My guess it was kind of a set up by Peter and Sue and it worked,” she says.

“Mum spent two weeks with my dad, after that he went back to Mauke and she to New Zealand.”

Fate had other plans for Patricia and Upokoina when a teaching job came up at Apii Mauke and he asked her to apply. Vainepoto Tangaroa sits and listens in the Divided Church in Mauke. 21010814

Both of them knew that the two weeks they had spent together was more than just a fleeting love affair.

Again being “impulsive” she applied, was successful and moved to somewhere she had never been – Akatokamanava/Mauke.

“She missed my dad and knew he wasn’t like any of her previous relationships,” Tangaroa says.

“The second day she was on Mauke, he moved in with her and the island was talking hahaha.”

Vainepoto Tangaroa was born in Mauke and if they had stayed a little longer her younger brother would have been too.

But after three years, Patricia was ready to go.

They lived pretty “primitive” in Tukume with no running water, no floor and an outside toilet.

Tangaroa’s dad was used to that life, but her mum even though she had a basic upbringing was not.

“Pregnant again with my little brother, she decided that it was not how she wanted to bring up her two children.”

Both Tangaroa’s parents had children from previous relationships – her mum a son and her dad a daughter.

“My big brother grew up with our family, a typical Maori family where he grew up with my mum’s sister so my mum could continue her studies and travel,” Tangaroa says.

“My sister grew up with her mother and we did not see her often. Growing up I often wondered why she didn’t make more effort; girls always dream of having that sister relationship and I have never had it.

“But in the last few years I have realised that I was lucky to have my brothers and my sister and we will always be connected through our dad.”

Vainepoto Tangaroa was eight-years-old when her dad passed away.

Looking back, she accepts the magnitude of such a loss and the effect it had on her, but as a child Tangaroa says she often thought her dad’s family could have done more to keep them involved.

“But as I have grown up, I have realised that they had their families and they didn’t have to do anything,” she says.

“Thankfully one of dad’s sisters made a big effort, she would bring her entire family to Gisborne, she would regularly call us and my brother and I were and still are really close with her children.”

Upokoina Tangaroa was buried in Hamilton, New Zealand right across from his father Tere’s plot.

For the first time since they left the Cook Islands, Tangaroa and her family returned to Mauke to place a memorial plaque that sits right on top of the grave of her great grandmother – Mama Aue, Vainepoto Ngauu Aue nee Taia.

“My mum wanted to bring him back but for many reasons, we did not,” she says.

“And we were lucky enough to have most of my dad’s siblings and his mother in New Zealand.

“My Nana and one of her dad’s sisters lived and still lives in the 16th island of the Cook Islands – Tokoroa.”

Life doesn’t stop for those left behind after a loved one passes away, but it doesn’t mean it gets any easier either.

Tangaroa and her brothers were blessed to have her mum, but there were always questions in the back of her mind. Questions she was often too scared to ask because of fear that she might hurt her mum.

In 2013 the Tangaroa family returned to Rarotonga for a holiday.

Then in 2018, she came back alone with her dad’s brother, mother and her cousin for the New Year in Aitutaki. Two years on, Tangaroa has contemplated about whether she was ready to make the move to Rarotonga.

Maybe not, she says but she knew that it was something she had to do.

“I wasn’t getting the same enjoyment I once got from Flight Centre, I had been there nearly four years and even 18 years on I was still having a hard time dealing with my dad not being around,” Tangaroa says.

“So go to the place he loves the most, technically that is Mauke but Rarotonga is pretty close.”

As soon as Tangaroa arrived on Rarotonga, she says she could feel her dad’s presence - she drove around the island and just cried.

“I knew this is where I needed to be. It was so special and I knew I had made the right choice,” she says.

Akatokamanava/Mauke hasn’t always had a place in Tangaroa’s heart, when she returned after her dad passed, she was a child and did not appreciate the beauty of her and her father’s birth place.

With age comes wisdom and the ability to really see. Every trip to Mauke since has been an eye-opener for Tangaroa.

One day she hopes to make a permanent move.

“The people of Mauke make every trip so special for me, I remember when I came in September some of the locals came up to me at the airport and said ‘Vainepoto, welcome home’ and ‘Vainepoto, how’s mum?’ and as the days go on more questions and more conversations, I had no idea who they were but they were happy to see me,” she says.

“With each visit I have learnt how many people actually remember my mum and dad and that is something so beautiful.”

People have shared lots of stories about her dad but at the core of most of them, he was a tough man and did not care who you were.

He was staunch, head strong and lived his life how he wanted. He was a great rugby player and boxer, he loved to fish and plant.

“I always knew what this island meant to him but it wasn’t until I returned to the Cook Islands, I got a better understanding just how important it is,” she says.

“There was one person that he would listen to though, my Nanny Vainepoto. She was the matriarch and though he did not care who you were, she was everything to him hence why I was lucky enough to get her name.

“Growing up, I did not like the name at all but I just didn’t understand the importance of who she was to him and everyone in my family. It was a honour to have her name and I know that now.”

Since moving to Rarotonga, Tangaroa admits there have been some tough times.

After all it’s the first time she has lasted as long as she has away from her mum, Gisborne where she grew up and her other slice of paradise - Tokomaru Bay, a seaside settlement about 90 kilometres away from Gisborne.

But the healing and growth that she has experienced has all been worth it.

“I remind myself why I am here and what I have got out of this experience. The friendships, the family connections, the connection to my Cook Islands culture and of course my personal growth,” she says.

“Even though I was not ready to move, I am so thankful for Cook Islands Tourism - they have created a safe place for me to grow and a family I did not know how much I would need on this journey.

“I miss my little slice of paradise on the East Coast most days but now I just have two homes.”