Remembering Cyclone Martin: ‘Many took that flight and never came back’ 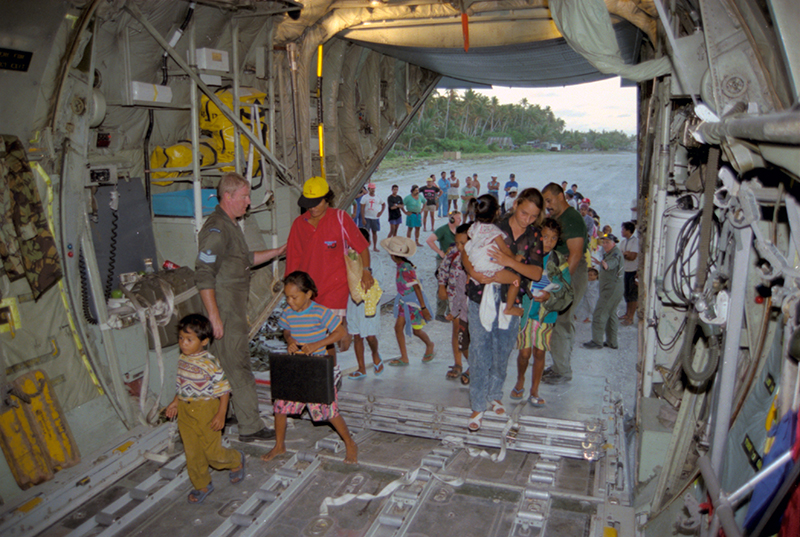 It was a cyclone like no other, and its impact is still felt by those who lived through it. Rebecca Hosking-Ellis talks to Cook Islands News senior journalist Matthew Littlewood about her memories of Cyclone Martin and the toll it took on the Manihiki community.

Cyclone Martin ripped through Manihiki on November 1, 1997. In the days leading up to it, there was some indication that it would be a big one, but Hosking-Ellis says no one had any idea of how big it was.

The former police officer for Manihiki was one of the two dozen or so who attended the 25th anniversary memorial service at the Manihiki hostel in Rarotonga earlier this week, and her memories of Cyclone Martin have not faded in time. She spoke to Cook Islands News on Friday.

“There was so much damage, a lot of people lost their homes, we lost our home,” recalls Hosking-Ellis, who was the police officer for Manihiki at the time.

“We had one of those old colonial houses. The walls were thick, they went down really quickly. It was awful, we had to live in a tent for nearly eight months, but thankfully the New Zealand Government assisted in building cyclone-protected shelters on the island.”

In the day after the cyclone hit, Hosking-Ellis and others dialed Australia via satellite phone.

“There was a family who rang their family in Australia, and the family rang Rarotonga police headquarters. My instruction was to help with clearing the airport on Manihiki.

“This was on a Sunday, and in Manihiki, Sunday was a day of rest. So, I had to explain to the people on the island that we needed to clear the airport and that help was on its way.

“We had to fill in the holes (on the runway) that was caused by the waves, and we achieved that, and the first Air Rarotonga flight was able to arrive. There were doctors and nurses on that flight.”

In the days following, assistance from Rarotonga and New Zealand arrived.

“When we had the Hercules flight arrive on the Monday, I had to put women and children on the flights to Rarotonga,” she says.

“We had to concentrate on getting the work done. A lot of the search and rescue operations were done by police who arrived in Manihiki on one of the flights, there were also some locals who assisted us.”

“A lot of people were stuck and couldn’t be reached. Some of them remain missing to this day,” she says.

The official death toll from Cyclone Martin on Manihiki is 19 people; at the Coroner’s Inquest in 2004, 10 missing persons were declared dead.

“We had one counselor come to Manihiki in the days after the cyclone hit. He did his very best, but he was so busy, and people were so traumatised. I felt very sorry for him,” she says.

“Everyone was having to make do with very little.”

Hosking-Ellis was one of the people who helped assist with the makeshift relief centres on Manihiki in the aftermath.

“It was a big challenge because we had to ration everything,” she says.

Hosking-Ellis still remembers the strain the event put on her family. Her son was seven and her daughter was three.

“They were very afraid. The living conditions were dire. But as a police officer, I was prepared. We had things like clothes, and supplies. But they still remember it to this day,” she says.

“My children had nightmares. It really affected them; they would hear the wind and rain and worry about it hitting them. It affected a lot of people.”

More than 380 people, nearly two-thirds of Manihiki’s population, were evacuated to Rarotonga in the days following Cyclone Martin.

Nonetheless, it was a struggle putting some people on the plane, Hosking-Ellis recalls.

“There were so many men who did not want to go, they wanted to stay. It wasn’t just that they wanted to help, but they didn’t know anywhere else,” she says.

“For me, I felt I had to stay because I was a police officer and I knew the people.”

However, she joined the others in Rarotonga for a few days after being advised to do so by the then-Prime Minister Geoffrey Henry.

“He said to me, ‘your grandmother wants to see you, she’s begging you to come home’. I couldn’t say no to either of them,” Hosking-Ellis says.

“My grandmother was relieved to see me. But I didn’t realise at the time the impact it had on my children to leave them for those few days. It’s a lesson for me. It’s tough trying to do the right thing. I never left my kids again.”

“A lot people took that flight to Rarotonga and never came back,” Hosking-Ellis says.

“They were too afraid to go back. I last visited Manihiki in 2020. You can see the decline there.

“Every November 1, you relive the event. That’s why I get emotional, because you can’t block it out. We’re only human. We sometimes try to act tough, but it’s still with us.”

“One day I’m going to write a book about it. I still think about it a lot.

“If there’s a positive that has come out of it, it’s that people have learned to listen and follow instructions. They don’t want to see something so traumatic again.”