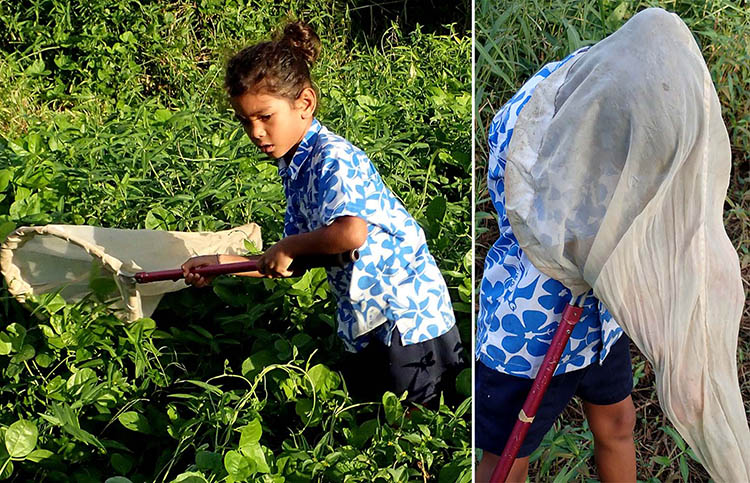 Residents often talk about Cook Islands biodiversity, but few have discovered as many unrecorded species as six-year-old Keanui Selam. His recent insect-catching expeditions led to the discovery of eight unrecorded species of Heteroptera, a group of insects known as true bugs, or typical bugs. By Gerald McCormack of the Natural Heritage Trust.

True bugs all have a proboscis of long tubular mouthparts, which some use to suck the sap of plants; while others use it to spear and suck the juices out of caterpillars and other insects.

One Friday a couple of months ago, Keanui having done well in his reading lessons came to the Trust’s office for a reward: the use of the insect net.

A little while later he arrived back excited with his catch.

He tipped them onto the desk and I saw two specimens of a dull brown true bug already in the national biodiversity database.

“Have you seen that? Have you seen that?”  His persistence paid off when he convinced me the nearby greenish smudge was also important. Higher powered glasses showed the smudge to be a tiny insect minus some legs! Not known to the Trust.

“Ok, Ok. Let’s go. Show me exactly where you walked with the net.”

I followed along swiping this way-and-that and not only did we collect the Keanui mystery bug but three other unrecorded species.

After several expeditions to the weeds on the edge of our Karekare property, we collected eight previously unrecorded species of true bugs or Heteroptera.

There were several other unrecorded insect species, but I discarded them because we cannot cope with so many unrecorded species at one time.

Selected specimens are photographed live, then killed in the deepfreeze before gluing or pinning to take up residence in the Trust’s numbered insect collection.

This is an essential process so they can be checked in the future by specialists to confirm identifications.

Keanui’s expeditions happened to coincide with an interest in Heteroptera by French entomologist Thibault Ramage, who lives in France but works on insects in French Polynesia.

The Trust usually records unidentified species under “descriptive” English names, such as LygaeoidQQblackthorax or MiridQQwideEyes.

In this case, Thibault was able to provide full Latin names for five of the new records. A well-known member of the true bugs or Heteroptera is the common pest, the Green Shield Bug, or Green Stink Bug.

It is the species viridula in the genus Nezara, in the family Pentatomidae.

This is usually written as Nezara viridula (Pentatomidae). Genus and species names are traditionally written in italics with an initial capital for genus.

The Green Shield Bug has been known in the Cook Islands since 1949. It is a pest on, at least aubergine, beans, cabbage, capsicum, cucumber, watermelon, tomato, lettuce and sweet potato and Chinese hibiscus.

Recording local biodiversity can be a rather despairing occupation because we have little idea of how much is yet to be discovered.

I think the national biodiversity database presently records only a little more than 50 per cent of our biodiversity.

In 1999 I convinced a group of entomologists to estimate the number of insects in the Cook Islands. They settled on a total of about 1250 of which the Trust has records for 650.

Before the Keanui-inspired expeditions, we had 29 Heteroptera in the online biodiversity database.

And this inspired a dedicated effort on this group of insects in our photograph collection which revealed a further 26 species not in the database, bringing the total of “recorded” true bugs to 63. Of the 63, two in the database are definitely unique to the Cook Islands and a further two unidentified species are probably unique: one to Mangaia (in the Trust’s collection) and one to Rarotonga (in the Auckland Museum collection).

Detailed identification is a major problem for the Trust.

We usually look for similar species on the internet and then check the lists of related species known from Samoa and French Polynesia.

Both countries have had numerous scientific expeditions resulting in very extensive scientific publications on their biodiversity.

But, with Thibault, we have a major benefactor.

Not only did he provide Latin names for five of the eight recent unrecorded species, but he also identified 10 of our previously unidentified species to bring the total identified to 42 of the 63 true bugs known to the Trust.

In addition to the 21 yet to be identified already known to be present, we would expect at least 20 more to be found, including several in the mountains of Rarotonga and on makatea of the outer islands which will probably include several unique to the Cook Islands.

And, what was Keanui’s smudged insect?

Well, it posed a vexing identification problem because it was a juvenile, and in this group of insects the young often look very different to the adults.

For nearly two months it remained as “Keanui’s bug”. We are still not absolutely sure of its adult form, although it is rather near European juveniles of a species also found during our backyard expeditions: the Hyaline Grass Bug, Liorhyssus hyalinus, which is very widespread in the tropical and temperate zones.

I put some images on iNaturalist suggesting it might be Hyaline Grass Bug and asked the lead identifiers to comment. One came back with “I also guess so”. Is that final?

Special thanks to Keanui for the inspiration to finally tackle this particular group of insects. One day we’ll tackle the unrecorded insects we let go.