Home is a story 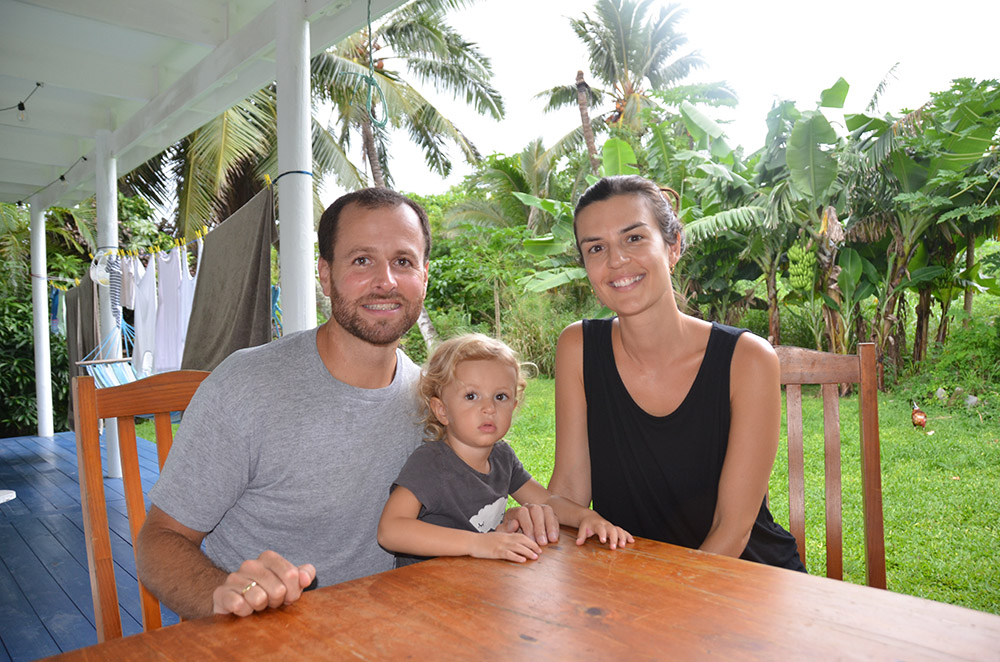 Emmanuel Samoglou and Nicole Adoranti, with their daughter Carmen, soon after they got stuck in Rarotonga in 2020. 20032034

Two times Cook Islands News journalist Emmanuel Samoglou has been on the road for close to a decade after he first left Canada. He’s now heading back and shares his views on home.

Close to a decade ago, Emmanuel Samoglou read in the New Zealand Herald that the Cook Islands News was looking for a journalist. Born in Canada with Greek heritage, the Cook Islands was unknown territory to both Samoglou and his wife, Nicole Adoranti.

Samoglou was a recent arrival in Auckland when he read the advert, leaving his home in Canada a few months prior due to “itchy feet”. New Zealand was distant and different and as a journalist by trade, Samoglou says he was ready to chase dynamic stories away from home.

In Auckland, Samoglou spent some time as a DJ for Base FM, while Adoranti worked for the University of Auckland.

But their time in Aotearoa was short-lived; after reading the ad in the Herald and a quick google of the Cook Islands led to a job application and a mere few months after they had touched down in New Zealand, the couple were on their way to Rarotonga.

It was 2013 and would be the first time that Samoglou and his wife lived in the Cook Islands; his second stint, which was an accident, was from 2020 to just a week ago.

Between the two times that he lived in the Cook Islands, Samoglou lived a nomadic lifestyle with his wife and eventually with their young daughter who is now three. Emmanuel Samoglou holds a mahi-mahi he caught over a week ago, with Cook Islands News staff in the background. 21092434

In 2014 the couple left the Cook Islands for the Middle East, where Samoglou worked as a journalist out of Dubai. The location of the job acted as a springboard where they travelled extensively to neighbouring countries and around the world.

“The Middle East is almost the centre of the world if you’re looking at a conventional map of the earth, it’s easy to travel in many places and it’s pretty cheap,” Samoglou says.

Moving is not foreign to Samoglou’s family who are based around the world. His parents immigrated to Canada in the late 1960s from Istanbul, Turkey. A region that used to have a once healthy Greek population, now Samoglou says it’s “a place that history has created divisions”.

“There’s not too many Greeks left in Istanbul so we’re kind of people who don’t have a strong sense of home,” he says.

“So when we talk about home my parents would talk about stories growing up and it’s a place which doesn't really exist anymore. When they grew up in Istanbul there were tens of thousands of Greeks, now there are less than two thousand.”

After Samoglou finished his time in the Middle East, his family were busy globe-trotting and when they went to visit New Zealand, they thought they’d make the short flight to Rarotonga where they would show their daughter Carmen around their island home.

In a story Samoglou wrote in March 2020 for Cook Islands News, he says, “it wasn’t originally on the itinerary, but a spur-of-the-moment decision had us packing our bags for Rarotonga once again”.

The intended vacation was extended to over a year-long stay after flights were cancelled due to Covid-19 and it led Samoglou to work for Cook Islands News once again.

In the article he says, “it’s the fantasy for many, mostly those from places where the ground freezes during winter and fresh food arrives in giant 40-foot steel containers.

“I’ve lived in Rarotonga before, so the whole stranded-on-a-topical island fantasy is less of a dream, and more of a quaint and unique lifestyle for us former city-dwellers.”

On Thursday last week, Samoglou boarded the plane to start his new journey back to Canada. Although it’s a familiar country it’s a fresh move; his family is moving to Vancouver on the west coast, opposite to Toronto in Canada’s east, where he grew up.

He says it’s a place he and his family plan to settle and put down roots.

“Part of going home is a quest to really plant roots and instill a sense of home for my daughter, she’s Canadian, we’re going to plant roots in Canada,” Samoglou says.

“Prior to Covid, travelling was just something I loved to do. We loved to visit new places far off the beaten path and I would say we have been quite nomadic, we lived in multiple countries since we left Canada and Covid changes that in a sense. Now we want a secure place that we call home.

“That really has increased in value for us, that concept of a place that you can call home and that’s become much more important to us now.”

Samoglou says he doesn’t easily say “we’re going home” because it’s been close to a decade since he lived in Canada, but says he identifies with being Greek.

Adoranti is following a job in Vancouver and as for Samoglou he says he will be a man of the household for a while, which he’s looking forward to doing.

“I like to take pauses and this will be a good pause … I’ll see what the world offers from there.”