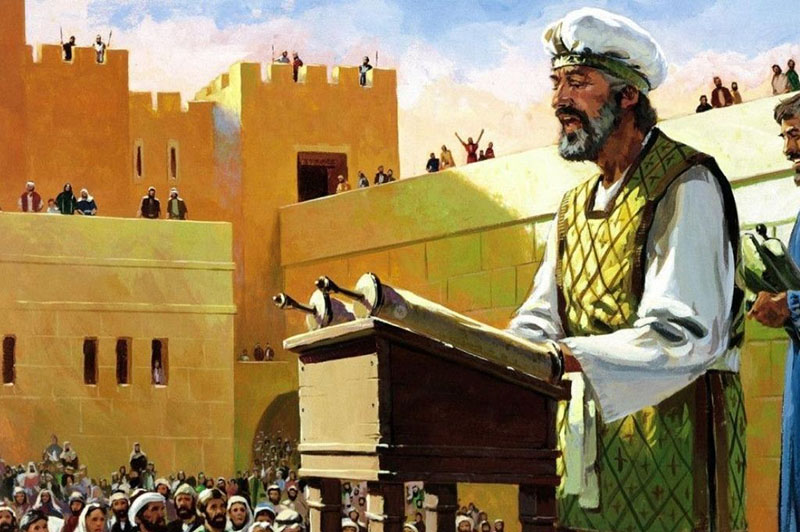 In Nehemiah chapter 8, we read that the people gathered together in unity in the city centre, and that a special podium was set up for Ezra the priest, so that, from this podium he could read the first five books of the Bible. Jesus in Bible/21092319

There is a particular moment in Israel’s history that my article focuses on, and a provoking thought for us today, writes Pastor Paul Kauri.

In Nehemiah chapter 8, we read that the people gathered together in unity in the city centre, and that a special podium was set up for Ezra the priest, so that, from this podium he could read the first five books of the Bible. He stood on this high podium so everyone could see him; men, women, and children. There was a great sense of awe and anticipation building up to this moment, when Ezra would read from this sacred book, for the people had not heard its sacred words for at least 40 years, while they were in captivity.

As God was rebuilding His people, remembering the covenant He made to His friend Abraham, the people sensed the significance of the moment they were in, and as Ezra opened the book for the first time in 40 years, the people rose to their feet. From dawn till noon Ezra read and explain what the scriptures meant so that people could understand, and as he read, the people wept. For one generation, it was because they had not heard these words in many years, so they wept. For another generation they saw the ignorance of their decisions in life, which caused much heart ache, and they wept, for they had never heard these words before, and no one had ever told them.

Nehemiah comforts his people by encouraging them not to weep but to celebrate. It is also from this chapter in the Bible that we get the phrase, “the Joy of the Lord is your strength” in verse 10.

As I read this chapter I was captivated by the reverence of the people toward God’s word. I thought about the moment when Ezra opened the book and the people rose. It brought back memories of the times when our national anthem would play and we would rise. Or if we were playing in the playgrounds at school, whenever the national anthem played the whole school stood still in reverence and respect to the raising of our flag and our nations anthem. I thought about a generation today, who are growing up without that knowledge or practice of reverence and respect for King or for Country.

I recently heard a story of a youth pastor who was asked to work with a group of teenagers, who came from a very rough background. They were not allowed to use the Bible to “bash” the kids, neither were they paid for this role. They were however given an old basketball gymnasium they could use to run their programmes, while their parents were forced by the courts to take appropriate rehabilitative courses.

This was a group of teenagers who had no morale boundaries, or any understanding of personal value, and, needless to say, their language reflected their upbringing. The boys and girls played basketball together. The boys fouled the girls on a totally different level if you get my drift! The promiscuity and seductive behaviours only reflected a generation who did not know their value or the value of other people, and sex drugs and rock ‘n’ roll was means of surviving the realities of their world.

The youth pastor, along with his wife and few other helpers decided to set a programme, which consisted of 1 hour of basketball and half an hour of teaching without using the Bible.

Week by week as he taught them, they were listening and watching. As the weeks went by, the values of the teens changed and so too did some of their behaviour and language. When new kids who joined the group began to swear, the kids would run with them and say, “bro, we don’t talk like that here”. When new girls who joined the group began to flirt with the boys, the girls would tell them, “We don’t roll like that here! We’re too precious!”

He recalls one particular evening after talking about the context of sex within the covenant of marriage, sexual purity and personal value, a young girl came up to him to say with tears in her eyes, “no-one ever f*#!@ told me this! I never knew I was this important” (as I said, the language reflected their upbringing)

I thought about the people weeping as Ezra taught. I thought about this young girl and her tears, and in both cases, they wept because they did not know the Words of Life, no one had ever told them.

Worth thinking about if we are to build a generation that is coming through … ready or not.