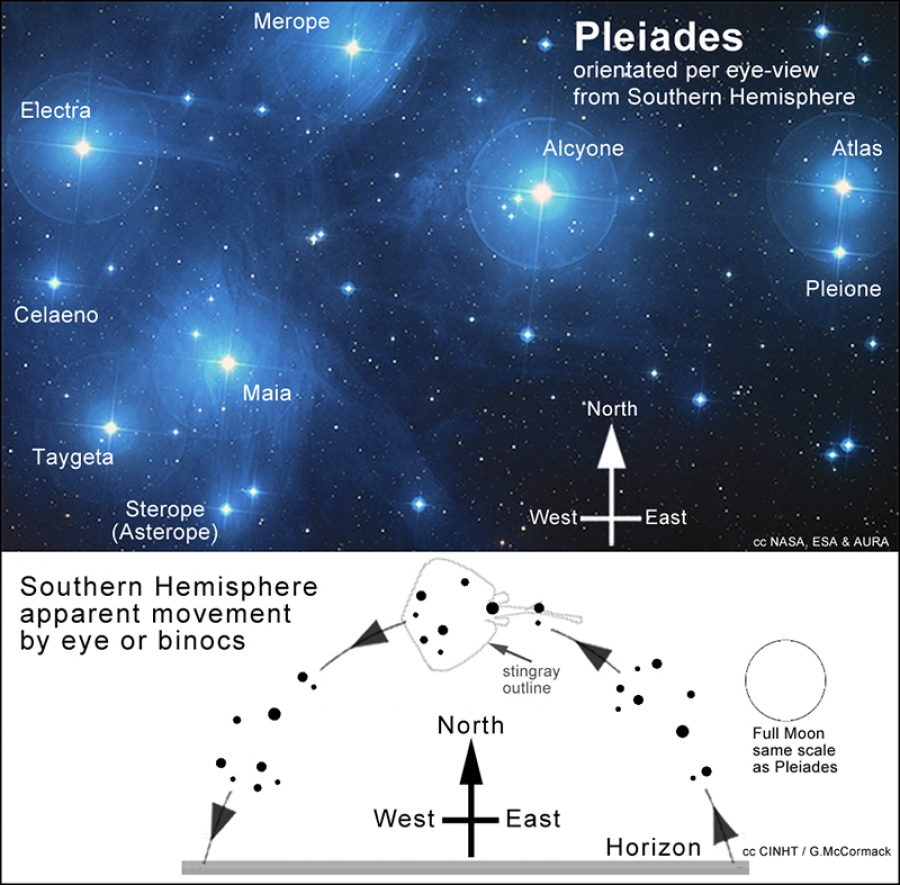 A telescope view of Pleiades showing some of the thousands of stars. The main stars are outlined by a stingray swimming from right to left across the Southern Hemisphere sky. The full moon is shown on the same scale as the Pleiades in this diagram. 19111816/ 19111817

In Cook Islands, Matariki rises in November – unlike New Zealand when it is first seen in June. Gerald McCormack, of Cook Islands Natural Heritage Trust, explains how to see this herald of our own New Year.

The Matariki or Pleiades is a cluster of millions of stars.

To the naked eye the nine brightest stars form a distinctive cluster within a glowing background about the size of a full moon. People with dark-adapted eyes and excellent distance vision can see eight or nine stars. More typically people can expect to see five to seven stars.

In ancient times people used a lunar calendar of 30 named nights to represent the lunar month of 29.5 solar days.

Obviously, every second month they had to discard the 30th named night and start the next month a day earlier so their calendar remained synchronised to the actual lunar cycle. In the Cook Islands the lunar calendar was called the arāpō.

People also needed an annual or seasonal calendar to better predict the best seasons for fishing and planting. Unfortunately 12 lunar months is too short and 13 too long. The solution was to have 13 named lunar months and use or discard the 13th month.

Throughout Polynesia, the Matariki or Pleiades was used to identify the start of the New Year. For most of Aotearoa they used the first sighting of the Pleiades in the dawn sky in June.

This is quite a distinctive marker because the Matariki is seen in the pre-dawn sky and then the sun burns it away. It is a small window.

In the southern Cook Islands and French Polynesia the marker was the earliest evening rising of Matariki in November. The key was that Matariki had to be seen very near the horizon as soon after sunset as possible.

On Thursday evening I saw the glow of Matariki near the horizon and its brightest star twinkling at 8pm. This observation marks the ancient New Year.

In most cases the New Year did not start the next day but they let the present lunar month run its course and the next new moon hailed the first month of the New Year, Ākau. This year the new moon will be on November 26.

In general, the first stars that can be seen near the horizon appear at about 7.50pm which is the start of the astronomical twilight. Over the next 10 minutes they rise about two degrees and become more obvious, and by 8.10pm they are a further two degrees above the horizon and even more obvious.

The star map of Pleiades rising shows the location of Matariki relative to some stars that are more obvious because of their greater brightness.

At 7.50pm you should look for the four main Andromeda stars forming a line upward to the left, and a little distance to the south the two bright stars of Aries, the Ram.

And further southward, the two bright stars of Cetus, the Sea Monster. When you have these stars located you look down to the right of the Aries stars to hunt for the glow of the Matariki.

How high above the horizon? If you point to the horizon with your arm straight and then turn your finger tips to point across your field-of-view, each finger width is about two degrees of arc.

At 7.50pm on Friday, Matariki was up two-to-three fingers (five degrees) and each day thereafter it will be half-a-finger (one degree) higher at the same time.

In ancient times, did people celebrate the dusk rising of Matariki or the next new moon as the New Year? It is unclear.

But the few known oral traditions indicate people celebrated the rising of the Pleiades rather than the next new moon.

A time might come when Cook Islands celebrates Matariki Day each year on November 15.