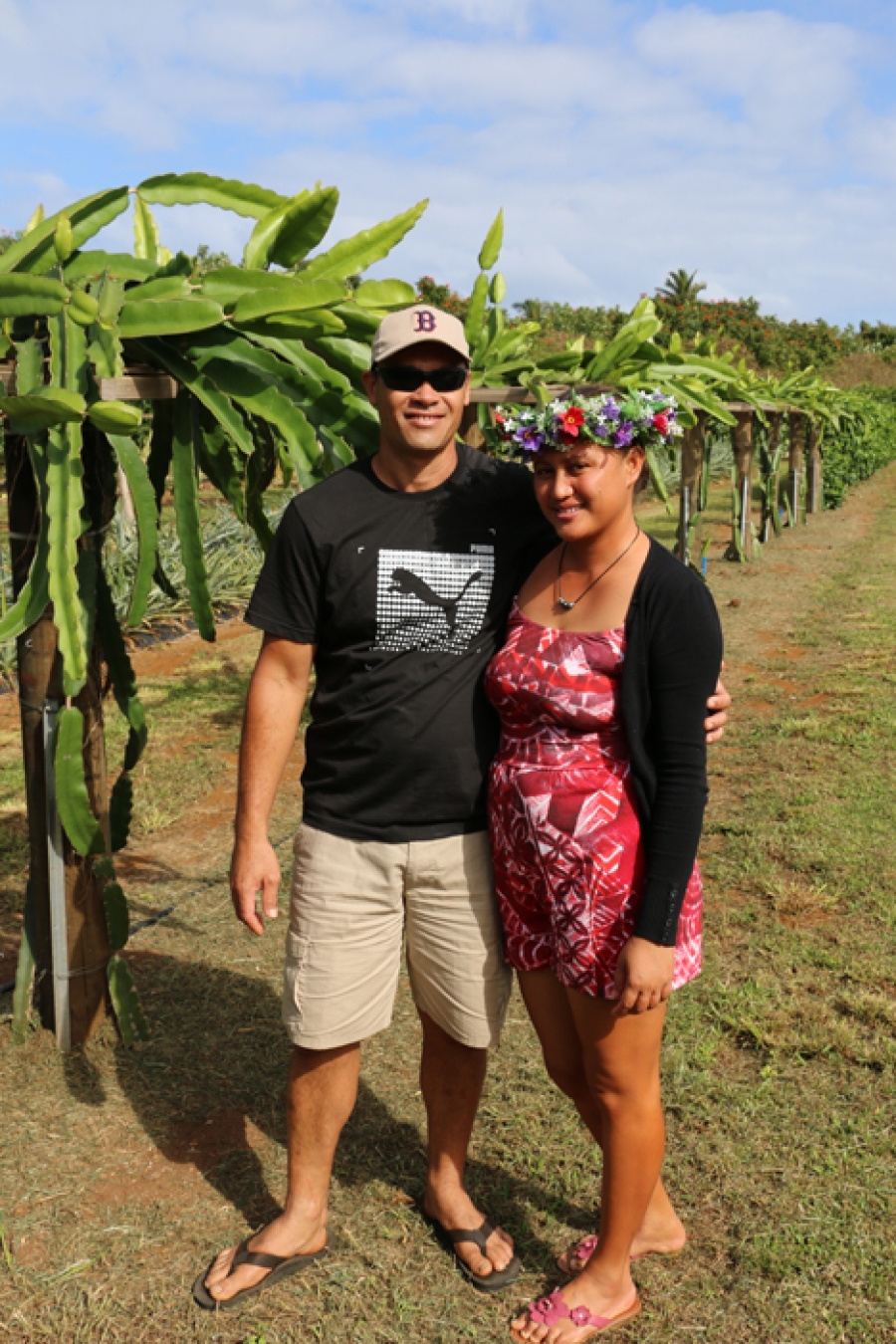 Derek Fox describes an exciting new venture on Aitutaki which is showing the way forward for the production of fruit and produce on the island.

They say that necessity is the mother of invention - and with good reason.

And as if that old saying needed to be reinforced yet again, a project that is barely a year old in Aitutaki is not only proving the point, but has all the potential to be a real role model and to also kickstart a series of similar projects in Aitutaki and other pa enua.

It all started when Taa Maao who manages the Vaka Cruise on Aitutaki just couldn’t find enough fruit and local produce to feed her cruise passengers. Vaka Cruise is the tourist venture whereby day trippers to that iconic atoll fly in on Air Raro first thing in the morning and spend the day out on the lagoon on a big motorised double-hulled vaka. The cruise includes a visit to Tapuae Tai (One Foot Island).

She tried everything; heading to the local market as early as she could, asking friends and family what they had in their plantations and even hunting in the bush for supplies herself. But still, she could never get enough.

So here was the problem: The vaka cruise runs from Monday to Saturday. It can carry up to 44 passengers and 20 to 30 is a pretty standard number. Local produce including fresh fruit is one of the highlights, but if you can’t get enough of it, then what?

The obvious answer was to grow what was needed. Taa was no stranger to gardening. As a child she used to help her late grandfather tend his garden, but she remembers it as labour intensive, with almost continuous weeding. Her grandfather had left a parcel of land for her son, so she had land.

Then a number of things lined up to allow real progress to be made. The project captured the imagination of Ewan Smith from Air Rarotonga who already had an interest because Air Raro owns the Vaka Cruise business and they could certainly do with the fruit. But Ewan became enthused for other reasons too.

“I haven’t been so excited about a project for ages. I could see that not only would a well-run and set up orchard supply our needs, but it could also supply other needs on Aitutaki and serve as a role model. So in time, who knows? A whole industry could be set up on Aitutaki and elsewhere using their land and supplying fresh fruit to Rarotonga. Our aircraft certainly have the capacity to bring fresh fruit in from the pa enua.”

“Well-run and well set up” are key phrases in this story. The history of the Cook Islands is littered with stories of outsiders encouraging people to grow acres and acres of fruit and vegetables, only to see the growers left high and dry without a market and a heap of rotting produce.

Taa’s planned orchard had one big advantage however. It already had a market sewn up; and that market – the vaka cruise,was willing to invest in the set up.

But the real break through was the presence on Rarotonga of someone who is possibly one of the world’s leading horticulturalists, Brian Paxton.

Brian had already developed a state-of-the-art three-acre orchard at Arorangi, producing about 30 varieties of exotic, high-value tropical fruit. He’s an Australian and arrived here after developing hundreds of acres of orchards on the “big island” in Hawaii. He was willing to develop Taa’s one acre on Aitutaki.

Now, just over a year since it was set up, Taa’s Kuramoo Tropical Fruit Orchard stands out like an oasis from its neighbouring plots.

Brian has put all the training, skills and expertise he has into it. For starters it’s fenced and laid out in an orderly fashion. Crops are planted or propagated progressively so not all the fruit ripens at once thereby creating a glut followed by a drought of product. The 15 or so species are all high value fruits and well sought after, and while the orchard’s primary market is the vaka cruise, Taa has already had the local resorts calling her to seek product.

There isn’t any back-breaking weeding involved - the crops like pineapple, which can require a lot of weeding – are grown under polythene sheets and therefore weed free. The orchard has an in-ground irrigation system and Brian has all the plants and trees on exactly the right level of fertiliser or irrigation that they need.

The results are spectacular. Pineapples which can take up to 18-months to mature and ripen grown the ‘island-way’ tend to be pretty small. At Kuramoo the pineapples are ready after 14 months and they are huge – around 2kgs each. Pawpaw trees have dozens of fruit per tree, they’ve already had dragon fruit (two varieties), banana and passion fruit (huge) harvests.

Coming along nicely are lychees, longans (like lychees), mangoes, avocados, figs and Tahitian lemons and limes. Taa’s partner and brother do the day-to-day chores on the orchard, mainly keeping it tidy and mowed.

Taa says: “It’s really easy, not like the old ways.”

Now that it’s done, and don’t forget it has a ready market, that one acre has the potential to make a return of about $60 000 a year. Compare that with the average return per acre growing low value crops of about $6 000,” says Smith.

At first many of the local growers were not very supportive of the new venture, but one or two are now seriously interested in developing their own plots. Taa says she’s looking at other family land too and ideally could do with another one or two acres to develop to meet projected demand.

Brian Paxton is enthusiastic about developing other orchards on the outer islands, which he says are older than Rarotonga and like Aitutaki have deeper soils. As well as new orchards on Aitutaki, there are discussions taking place about developments on Mangaia, Atiu and Mauke.

The United Nations Food and Agriculture Organisation (UN FAO) has been involved in the development of Taa’s orchard too by way of a grant channeled through the Cook Islands Chamber of Commerce.

An FAO representative – Massimo Pera from Italy was here earlier this month and visited the orchard. Like everyone else who visits, he was impressed. Kuramoo and Brian Paxton’s orchard are the models that show it can be done.

The fruit they produce is exotic of high quality and value. Brian Paxton has people queuing up to buy his produce. He manages the market by stretching out the season for his produce not having a glut one minute and a dearth the next. This keeps prices up, with individual trees returning thousands of dollars each.

The establishment and input costs are substantial, but are more than offset by the returns. The Cook Islands are in a highly unusual and fortunate situation where tens of thousands of customers a year come here and for the forseeable future there is little need to export produce while the local hotel and tourist markets are still crying out for product.

Taa and her partner Iro Maoate are going through a huge learning curve with Brian Paxton. Not only has he shown them seemingly miraculous ways of growing top quality exotic products, but he’s also showing them how to look after their fruit all the way to the customer; like how to pick and care for them and present them in the best and most attractive way.

He’s done the same with the fruit he provides to merchants in Rarotonga, insisting that the produce be handled and presented in a certain way to its best advantage. And although the prices are high, the merchants just can’t get enough.

Many soothsayers have come to these islands in the past suggesting or even insisting people plant such and such a crop and promising great riches at the end of the day. But most of those crops have required bulk plantings with low returns; and not surprisingly local people who have been burnt or seen others get burnt, are sceptical.

The two functioning orchards in this story are just the opposite. They aren’t large but they are expensive to set up. However their returns are 10 times higher per acre than conventional crops.

They are also ‘private enterprise’ projects and not government-sponsored so there has to be a market that really wants the products in order for them to succeed. It’s something that will be new to some of the outer islands, where usually the government suggests and determines what should be done.

Maybe the biggest challenge will be to convince people that this is feasible and sustainable and will provide a good return for their investment in time and land and money into the future.

The horticulture case seems proven. Of course there will need to be things like soil tests and sufficient water for the projects. But the next biggest problem is finding a financial model that allows the development to take place. One that doesn’t hopelessly burden the growers with debt that they find impossible to service, yet is liberal enough to allow the developments to thrive and make a profit.

Taa is already looking to the future. She has four young sons who, she says, “get excited when we say we’re going to the orchard.” Her six-year-old in particular follows Brian Paxton around watching carefully what he’s doing and asking lots of questions.

Taa grew up round her grandfather in his garden, but back then it was endless and back-breaking weeding. There isn’t that sort of drudgery involved with this new orchard – it does need new skills and attention to detail in other ways.

It requires a different type of education, but it does provide the sort of income that so many Cook Islanders have left these islands to find –right here at home.