Chestnut mum says: Buy it, eat it, love it

Thursday 7 May 2020 | Written by Melina Etches | Published in Weekend 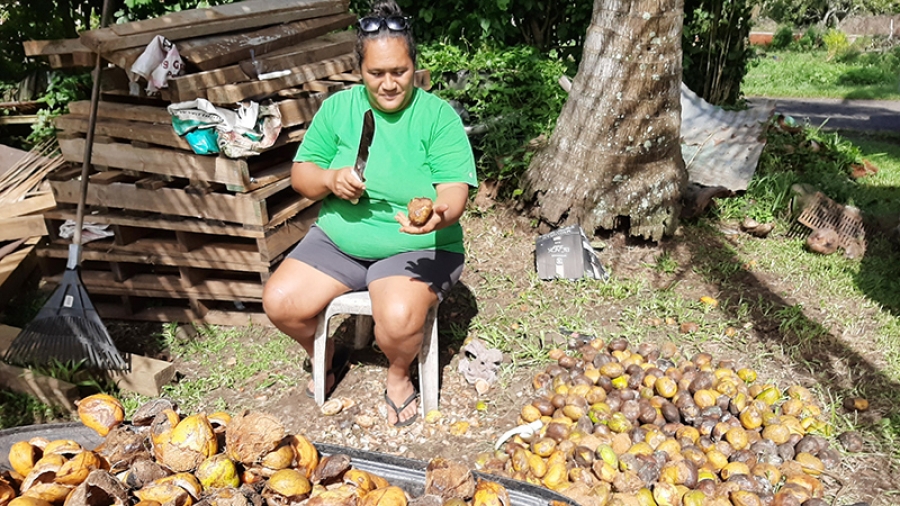 Ritia Tangimetua’s late mother loved chestnuts; now she has passed on that passion to her own children.

Ritia Tangimetua cuts the extremely tough shell of a Polynesian chestnut lying there patiently in her bare hand.

I watch with concern and nerves as she swings a sharp knife with gaps of no teeth to cut the casing of the fruit open.

She is unfazed and chuckles at my reaction.

Chestnuts are well loved by locals, and during its season, Tangimetua is one of many women gatherers who have the home grown skills and energy, to live off the land.

Tangimetua admits as a teenager she was scared during her first the cutting process.

But she overcame the fear, quickly.

She has scars on the tender parts of her fingers near the nails from a chestnut cutting session from midnight to 3am, some years ago.

The injuries were serious and needed medical attention.

And still she continues on with the process, “you have to, it’s just part of it, you get over it and carry on.”

Tangimetua says many women have discussed the design of a clamp that would be able to grip the chestnut.

“It would be good for something like that, but I haven’t seen one yet that works well, so this is the best way, hand.”

When the cutting process is done, peeling the fruit is next, “the one that takes up most of the time, you should peel and clean the chestnuts properly.”

Then comes the cooking stage.

Experienced cookers know when to top up the pot of chestnuts when cooking on an open fire, she says.

“The water level must be kept consistent and it usually takes 12 to 13 hours in total.”

These days Tangimetua uses a pressure cooker that saves a lot of time and sleep.

The chestnuts are then spread out to cool before bagged in a snap lock bag.

Nothing goes to waste, the water drained from the pot is used to cook food for their pigs, and the shells are used for a fire or compost.

Tangimetua notes that these days it is harder to find trees to collect from.

People who have chestnut trees on their lands up in the bush, now have signs posted to “private property”.

“When I started it was just bush and we would find these trees and collect, but now more are blocking the access to the trees,” she says.

For the tree’s way up in the bush land, she feels it is a waste to just let the chestnuts rot on the ground, “moumou tikae”.

She understands people who have trees near their homes who don’t want their chestnuts collected because unfortunately, there have been genuine complaints of young people who have touched private property, ruining it for others.

On Saturday she sells her chestnuts with her 10 year old daughter Jamie-Lyn at the bus stop in Matavera opposite Papa Peri’s house.

In the past she would join the women opposite the Empire Cinema.

“There would be five of us sometimes selling, you need to find a way to sell yours out instead of sitting with everyone at one place.

“So, I moved to where I am now, it’s good, it’s handy and there’s always traffic going past.”

The chestnut process is a family affair.

Her 15-year-old son Teremataora Rakanui has just started to cut, “and we as a family with my partner Trainee, collect, cut, clean, cook and pack it.”

“And the hardest part is walking through bush climbing hills and slopes to get the chestnut. You slip and slide because at times it is quite steep.”

Mother’s Day will be a sombre occasion, as her mother passed away suddenly in 2015. “I miss her a lot,” she says.

“My mother loved chestnuts and I love it, it’s hard to put it in the bag and not in my mouth,” she laughs.

“Sometimes I call out to my family, do you really think you’re just going to eat more of it, it’s money in your mouth.”

It’s hard work, but good money; but money can be just like the wind, whoosh and its gone, buying groceries, paying bills…

For people who complain at the price of $15 for a bag, she assures them it is not an easy job.