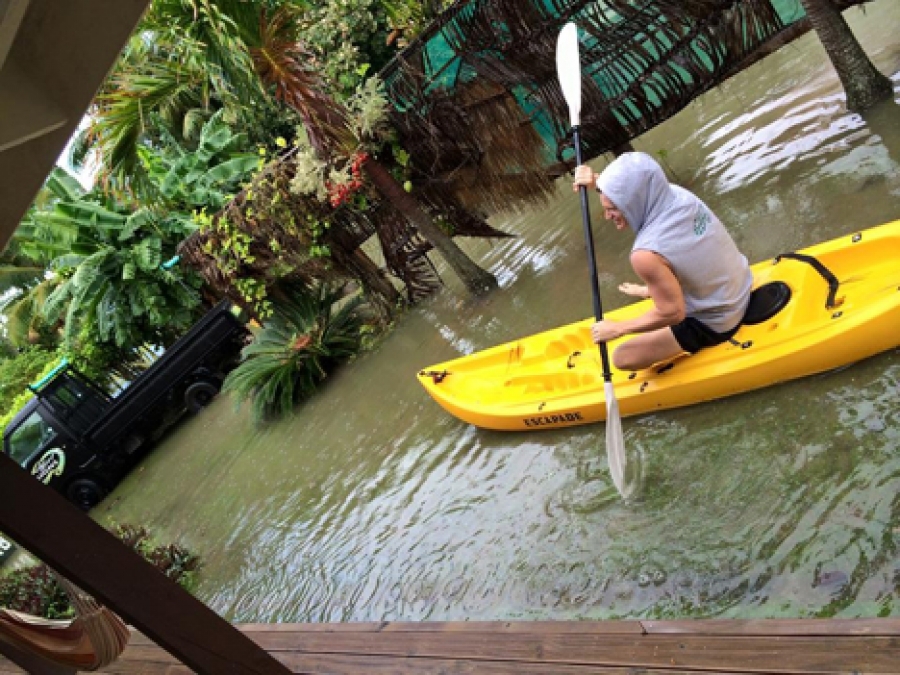 Brooke Millar took this photo of her dad, Hori Miller, kayaking outside their home in Titikaveka.

Heavy rains on either side of New Year ’s Day caused surface flooding to low-lying areas across the island.

However, the rain gods held off for a relatively dry day at the Tarekareka 2015 concert on January 1.

Between 7pm on Tuesday, December 30 and 8am on January 2 – a total of 186.6mm of rain was recorded at the Cook Islands Metrological Service in Arorangi.

The office in Nikao reported that 85.9mm of rain watered the island between 7pm on Tuesday 30 and 6am on Wednesday 31, with the highest hourly rainfall recorded at 14mm during the two hours from 12am to 2am .

There was no rain on January 1 but between 3am on January 2 and 8am, a total of 98.7mm of rain was recorded.

On the morning of New Year’s Eve, the Miller family in Titikaveka had to use a kayak to paddle across their yard to reach their vehicles. In fact the water was high enough on the drenched property to take a kayak for a spin around the family home.

In Nikao, residents backed on to the Rarotonga Airport kept a close eye on the storm drain along the back of the runway which flooded , spilling on to the nearby grass trip.

It’s certainly been a wet departure for 2014 and a damp welcome to 2015, with locals and tourists eager to see the sun and blue skies.