Solomon Islands does not want to be forced to choose sides: Foreign Minister 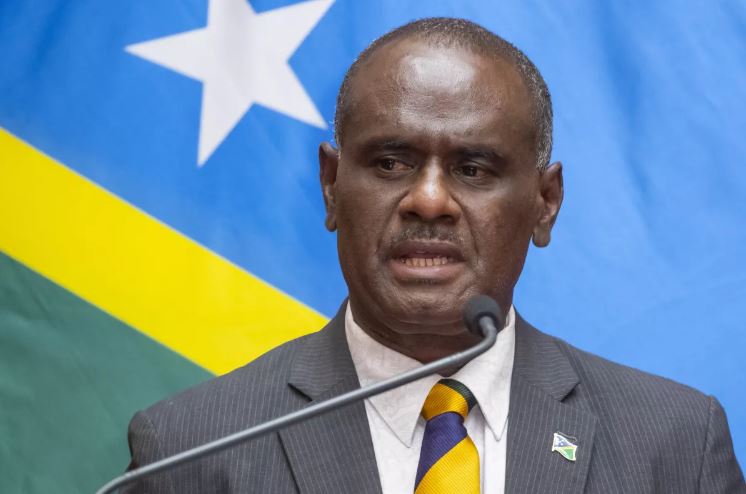 Solomon Islands Foreign Minister Jeremiah Manele says the country joined an agreement with the US only after changes to wording relating to China.

He says the country does not want to be forced to choose sides, and the Pacific should be seen as a region of peace and cooperation.

Manele was in Wellington last week for an official meeting with his New Zealand counterpart Nanaia Mahuta, and was welcomed to Parliament with a pōwhiri this morning.

Solomon Islands has been a central focus in discussions over partnerships and security in the region after it signed a partnership agreement with China in April.

After a draft of the agreement was leaked in March, New Zealand had described it as "gravely concerning", but the full text of the final document has never been made public.

The United States has been working to contain China's growing influence with Pacific countries, and last week brought leaders of 12 Pacific nations to Washington DC for two days with the aim of finalising a new Pacific strategy with a joint declaration of partnership.

Solomon Islands had initially refused to sign the declaration, which covered 11 areas of cooperation, but later agreed after a requirement for Pacific Island states to consult with each other before signing security deals with regional impacts was removed.

Manele clarified that decision when questioned by reporters this afternoon.

"In the initial draft there were some references that we were not comfortable with, but then the officials under the discussions and negotiations ... were able to find common ground, and then that took us on board, so we signed," he said.

Asked what specifically they were uncomfortable with, he confirmed it related to indirect references to China.

He said the Solomons' agreement with China was domestically focused and did not include provision for a military base.

"My belief ... and my hope is this - that the Pacific should be a region of peace, of co-operation and collaboration, and it should not be seen as a region of confrontation, of conflict and of war," he said.

"And of course we are guided by the existing regional security arrangements that we have in place - and these are the Biketawa declaration as well as the Boe declaration.

"We welcome the US re-engagement with the Pacific and we look forward to working with all our partners."

After securing its partnership agreement, US officials acknowledged they had let the relationship with Pacific nations "drift" in recent years, and there was more work to do.

Manele said he was "delighted" to be in Aotearoa for the first time in about eight years, after his previous plans to visit two years ago were put on hold by the Covid-19 pandemic, and thanked New Zealand for support in helping manage and contain the virus, including with vaccines and medical equipment.

He said the discussion between the ministers covered the RSE scheme, the need to review the air services agreement, the 2050 Blue Pacific strategy, and maritime security.

He was keen to stress the importance of increased flights between New Zealand and Solomon Islands.

"I think this is important, we are tasking our officials to start a conversation, we'll be writing formally to the government of New Zealand to review the air services agreement that we have between our two countries," he said.

The country was also hopeful of more diplomatic engagement with New Zealand.

Increased engagement would be required, he said, from all Pacific Island Forum partners, including Australia and New Zealand, to tackle climate change in line with the Blue Pacific Continent 2050 strategy agreed at the most recent Forum meeting in Fiji.

Manele and Mahuta both highlighted climate change as the greatest threat to security in the region.