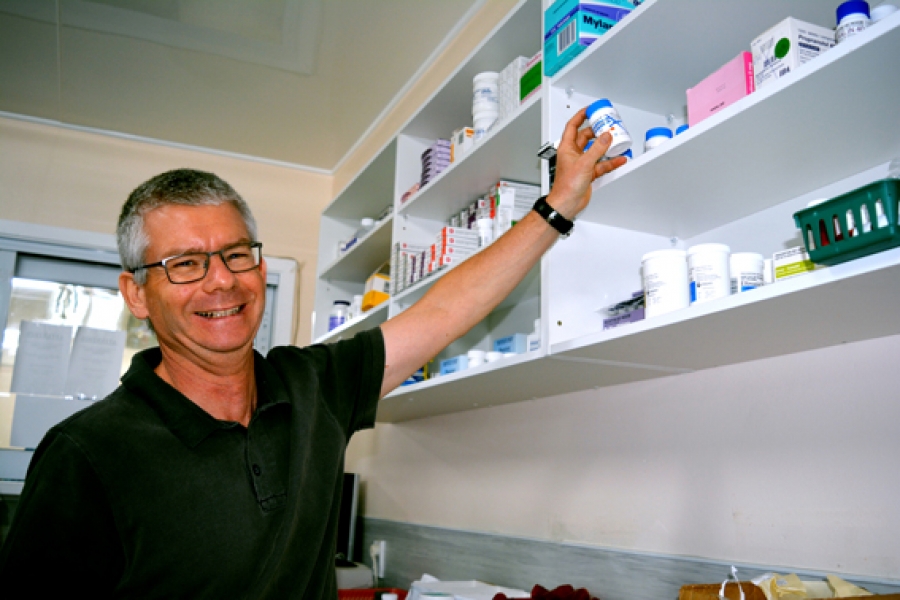 Cook Islands Ministry of Health chief pharmacist, Andrew Orange at the Rarotonga Hospital is enjoying his work. From 2016. 16080910

Cook Islands Secretary of Health Bob Williams says there is no ‘urgency’ to push on with legislation legalising medicinal cannabis because there is already one type available to access from New Zealand.

Previously, Williams has told Cook Islands News that a Cabinet Paper on legalising medicinal cannabis was being prepared.

However, on Monday, Williams told the newspaper that “there is one medicinal cannabis medication approved by Medsafe New Zealand that Te Marae Ora can import for approved patients in the Cook Islands which would not require any legislative or regulation change. Therefore, there is no urgency for Cabinet to make any decision”.

Chief pharmacist of TMO Andrew Orange has been contacted for comment. Cook Islands News asked both Williams and Orange what the product was, and how many Cook Islanders have access to it.

The push for use of medicinal cannabis in the Cook Islands received overwhelmingly positive response in a referendum question during the 2022 general elections, with 62 per cent of respondents voting “yes”. The referendum asked: “Should we review our cannabis laws to allow for research and medicinal use?”

Shortly after the election result, re-elected Prime Minister Mark Brown told Cook Islands News that the new Government would be looking very quickly to establish a regime to allow doctors to prescribe medicinal cannabis for their patients.

“We’re hoping to get it underway as soon as possible. Further to that, we will be looking at whether there is a chance to further diversify the economy in regards to production,” PM Brown earlier said.

“I think the Secretary of Health Bob Williams is cherry picking and has got the blinkers on in this case,” Boggs said.

“You’re allowed to use any appropriate country, such as Canada or the United States, as a model for medicinal cannabis legislation.”

Boggs said both the Prime Minister’s previous comments and the referendum result indicated that many people wanted to see some progress urgently on legalising medicinal cannabis.

“The people have spoken,” he said.

Boggs said there were a number of cannabis clinics in New Zealand you can contact to discuss medical marijuana with a doctor.

“Legally you don’t need anyone in the Government to freely exercise your civil rights as long as you meet all the requirements for personally prescribed imported medicine,” Boggs claimed.

“But I’m compelled to caution everyone that it would be better to contact the Minister of Health Rose Brown and get her written permission, because otherwise I have no doubt that somewhere, someone down the line in the Government will try to infringe on your civil rights and try to put a stop to it.”

New Zealand Drug Foundation executive director Sarah Helm said: “In New Zealand, both the industry and patients have struggled with our medicinal cannabis regulations because they are overly restrictive.”

“The high-quality standards that suppliers are expected to meet, and the lack of funding, mean that the price is excessive. As a medicinal cannabis patient myself I pay approximately $330/month for CBD oil (with no THC in it) to manage my arthritis,” Helm said.

“Therefore, we estimate 94 per cent of patients are continuing to use the black market here (NZ).”