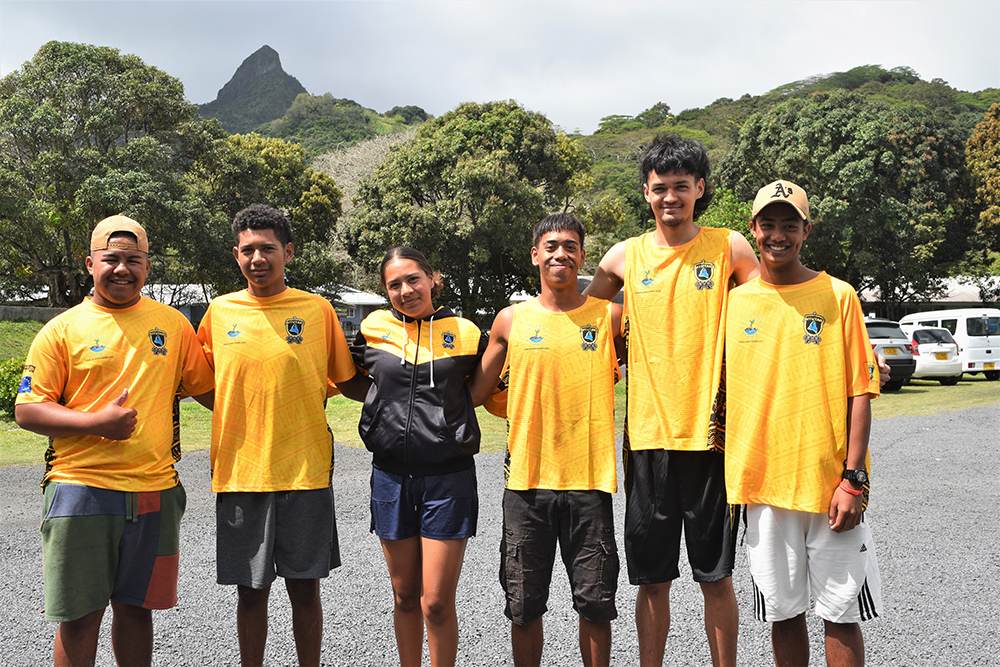 Cook Islands athletes from overseas have started arriving to participate in the 2022 Cook Islands Games which started yesterday with the official ceremony.

Towering over everyone at 6’7 feet, 17-year-old Simon (Junior) Law flew in from Australia to represent Team Aitutaki in the Cook Islands Games 3x3 basketball competition next week.

“I feel good to represent my culture and Aitutaki in a sport that I like,” said Law.

Born in Rarotonga to parents Camilla and Simon Law, Law Jr was brought up on the island of Aitutaki. His mother is from the village of Ureia and his dad Simon is from the Potini family in Vaipae. Law Jr’s maternal grandmother is Kairangi Paora.

At the age of eight, Law Jr, the eldest child with three younger sisters, moved with his family to Australia.

He started playing basketball in Grade 5 at school in Ipswich, Brisbane. He currently plays for the Ipswich Basketball Club which he has been a part of since the age of 12, and his goal is to get into the Big League Basketball competition.

“I love the competitiveness, the intensity, the speed and decision making of the game,” said Law Jr, who would like to encourage other youth to take up sport.

“If you put your mind into it you actually reach your goals, that’s what I did. At first I never liked basketball, but my Dad kept telling me to keep trying and put my mind into it, and I started getting better and better and that’s when I started enjoying the games.”

Standing as tall as he does Law Jr says he has difficulty buying clothes and size 14 shoes. He drove from Brisbane to Sydney once to pick up a pair of shoes.

Enjoying being back on the island, he says: “I’m very much looking forward to the Cook Islands Games.”

Aitutaki manager Strickland Upu said: “Another reason for bringing Law over was to expose him to junior players and help encourage young people to take up basketball.”

Upu disclosed they had underestimated Law’s shirt size and ordered an XL which turned out too small for the athlete.

“We thought we could judge his size from watching his videos, it never occurred to us that he would be a 3XL so now we are trying to swap it.”

Law Jr would like to acknowledge his sponsor Maremokura Tuakura from MJAY & VJAY Propriety Ltd (Donut King) from Melbourne, for paying for his return airfares from Brisbane.

The Araura College students arrived this week and are “a little nervous” and excited to participate.

Sharne Pupuke-Robati, who is currently playing basketball in Japan, arrived last night to compete for her home island of Rakahanga. Standing at nearly two metres (180cm/5’11), she will be participating at the National Stadium this morning in the shot put and discus events in the open women’s division and will also compete in 3x3 basketball competition.