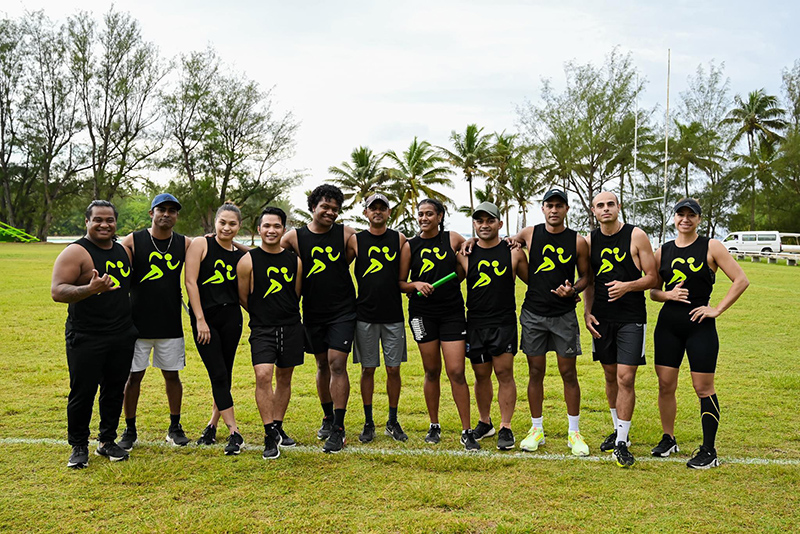 To finish off this year’s Round Rarotonga event, the Round the Rocky Relay on Wednesday almost saw the current course record broken.

Although a smaller number of teams compared to previous years competed due to the race being so close to the start of the Cook Islands Games, the battle was still fierce.

The Pacific Pacers claimed the title in a time of 1 hour 43 minutes and 04 seconds. The Pacers were led by 10km local champion Rupeni Mataitonga who helped his team with a 21-minute win over Te Tupu.

The most colourful team were The Smurfs from Rotorua, who had returned to the relay for the first time since 2015 when they set a previous course record and had several runners backing up after the 31km on Saturday, September 24.

A special mention also needs to go to the team from Bank South Pacific with many of their team members joining the race straight after the end of the work day, including a strong anchor leg by another local legend, David Street, the country manager of BSP Cook Islands.

Event organisers again wish to thank Toa Petroleum for returning as the naming sponsor, alongside minor sponsors Prime Foods, Pacific Resort and Tamarind House for their contributions to both the race and the prizes for the teams.

They also wish to thank Gina and Kaka Ama for again providing the use of the Ngatangiia/Matavera Sports Clubhouse and Field as well as helping to keep the participants hydrated.

Athletics Cook Islands vice president Michael Tolosa said the funds generated by all the events held as always will be vital towards the youth athletics programme, and also the athletes returning to the NZ Secondary Schools Athletics Championships in December this year for the first time since the Covid pandemic.