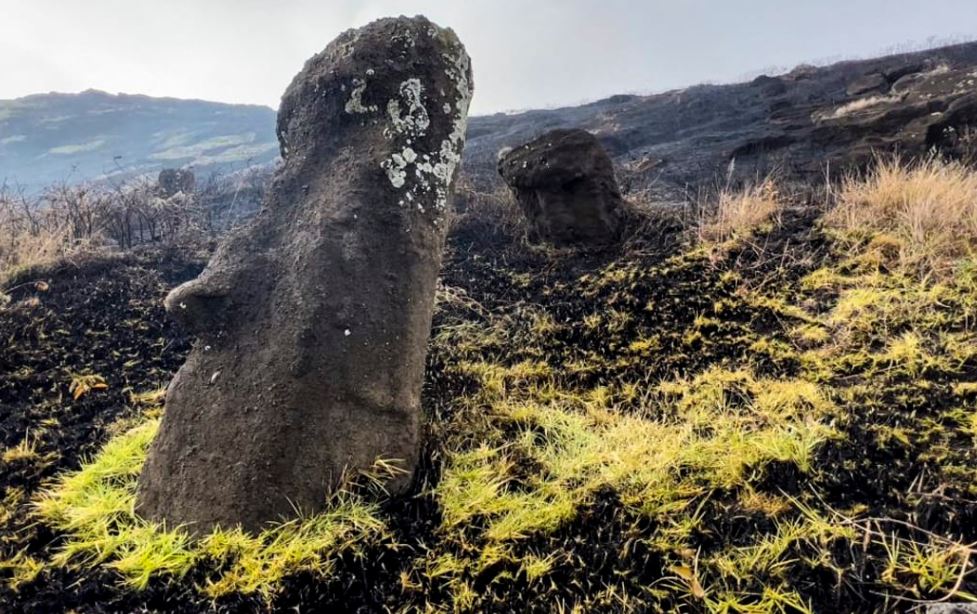 A wild fire has damaged the enigmatic statues on Rapa Nui, or Easter Island, with some of the charring said to be irreparable.

An unknown number of the stone-carved statues have been affected by the blaze, Chile's cultural heritage undersecretary said.

Rapa Nui has nearly 1000 of the megaliths, known as moai. They have oversized heads and generally stand about 4m (13ft) high.

They were carved by a Polynesian tribe more than 500 years ago.

The area around the Rano Raraku volcano - which is an Unesco World Heritage Site - was the most badly affected.

Rapa Nui lies 3500km off the coast of Chile. It relies on tourism and reopened just three months ago following its closure during the Covid-19 pandemic. The site has now been closed again while a conservation team examines the extent of the damage.

The director of the Ma'u Henua community which looks after the national park described it as "irreparable and with consequences beyond what your eyes can see.

The are some 1000 giant stone statues and carvings on Rapa Nui - the largest of which weigh 74 tonnes and stand 10m tall.

The figures were carved by the indigenous Rapa Nui people sometime between the years of 1400 and 1650, and positioned to form a ring around the island, facing inland.

Best known for their deep-set eyes and long ears, they also sport impressive multi-tonne hats made from a different rock type.

They were figures of spiritual devotion for the Rapa Nui, embodying the spirit of a prominent ancestor. Each one was considered to be the person's living incarnation.

One of the statues - known as the Hoa Hakananai'a - is housed in the British Museum, gifted by a British naval captain to Queen Victoria in the 1860s.

The Chilean government and the island's authorities requested it be returned in 2018.

But the island's mayor suggested he would prefer a financial commitment from the museum to ensure the upkeep of the remaining moai on the island.