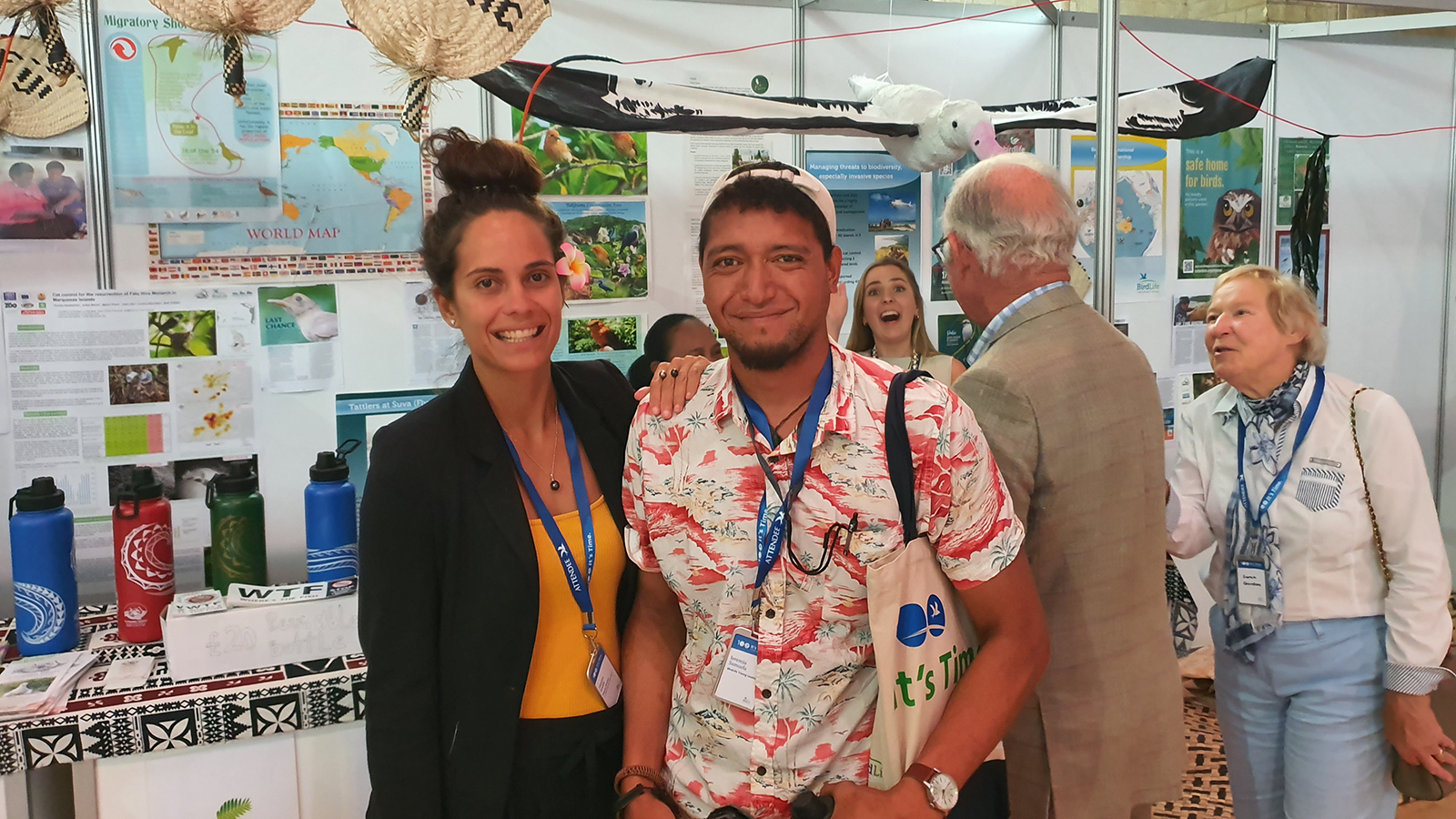 Represented by Alanna Smith and invasive species volunteer Ieremia Samuela, the pair connected in with 119 other global civil society partners representing over 13 million individual members who make up BirdLife International.

BirdLife is the world’s largest and oldest international partnership that works closely in nature conservation. The international organisation operates through local to global strategies aimed at achieving long term conservation benefitting both nature and people.

For example, BirdLife’s projects not only protect native and endemic birds, but go beyond by restoring habitats to benefit birds, the wider ecosystem and people. Social benefits have included an increase in healthy lifestyles worldwide through birdwatching. This trend has economic significance for nations that have endemic or native bird for keen birders who need to tick birds off their global lists.

Being a part of the Pacific Birdlife partnership creates opportunities for networking and regional learning. Neighbouring countries can learn from and support one another on regional issues such as biosecurity implementation for invasive species as well as regional support in protecting threatened migratory birds.

The week long congress also included the global BirdLife awards ceremony. The Takitumu Conservation Area was one of three globally recognised conservation groups awarded with the “Conservation Achievement Award”. This prestigious award was based on the TCA community management efforts in working closely with traditional landowners to bring back the Kakerori, Rarotonga Flycatcher from the brink of extinction.

In just 33 years, since 1989, the population has increased from only 29 birds to around 1000 today. This was achieved mainly through the annual rat baiting programme.

A second population was established by relocating some birds to Atiu, which is free of ship rats. This “insurance” population will help the birds survive the impacts of any catastrophic events, such as cyclones, on Rarotonga.

Through BirdLife, Te Ipukarea Society has acquired key skills in rat eradication projects, which have been applied in Suwarrow (national park), working alongside the National Environment Service.

Rat eradication and invasive species management on uninhabited and habited islands within the Cook Islands are areas we want to work more closely in, especially with the Pa Enua showing interest in wanting their islands to become rat free. Effective biosecurity will be key to restrict the reinvasion and further spread of invasive species, once eradication is completed.

The eradication of rats not only benefits nesting seabird populations, but also has food security benefits for inhabited islands where farmers would no longer have to worry about rats damaging their crops. Eliminating rats also encourages nesting seabird populations to grow, which in turn supports the cycling of nutrients from sea to land, enhancing coral reef productivity and functioning.

Overall the BirdLife Congress was a valuable opportunity to reconnect with likeminded conservationists from around the world.

BirdLife’s 10-year strategy to save nature was also adopted with a focus on three core themes that include birds, science and partnerships – whereby bird species are protected by where they live; science from partners around the world is used to conserve the 13,000 Important Bird and Biodiversity areas and global partnerships mobilise society including governments, NGOs, youth and the private sector.

Birds and people provide a reason for hope. Saving the Kakerori proved extinctions can be prevented and populations can recover. Birds are a species worth flying high for. Our future depends on it.

Please visit tiscookislands.org for more information about our work.