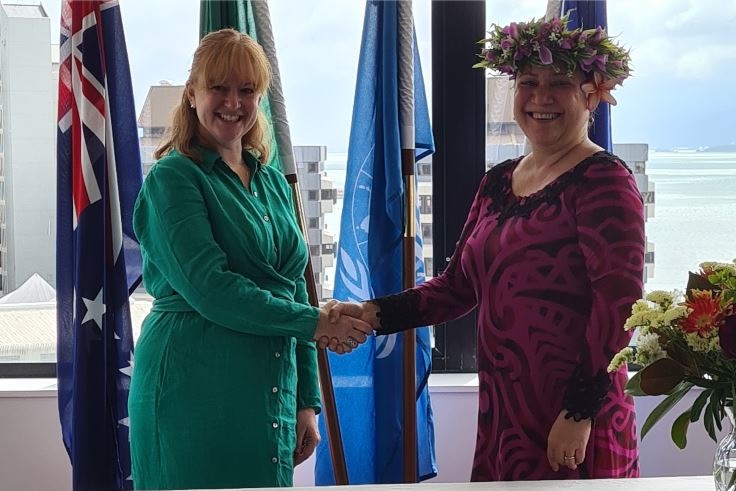 The Cook Islands and Ireland have committed to strengthening bilateral and multilateral co-operation through formalisation of diplomatic relations at a signing ceremony in Wellington on Sunday.

The Cook Islands and Ireland have committed to strengthening bilateral and multilateral co-operation through formalisation of diplomatic relations at a signing ceremony in Wellington on Sunday.

The signing of the Joint Communiqué by Cook Islands High Commissioner to New Zealand Elizabeth Wright-Koteka and Ireland’s Ambassador to New Zealand Jane Connolly follows a series of bilateral engagements between the two governments, the most recent between Prime Minister Mark Brown and Ireland’s Foreign Minister Simon Coveney at COP27 in Sharm el Sheikh earlier this month.

Speaking during the signing ceremony, High Commissioner Wright-Koteka said, “Our shared interests and demonstrated commitment to sustainable development, building resilience to climate change impacts, environmental integrity, and the primacy of ensuring the health and wellbeing of our peoples offer an elevated platform for forward co-operation in the months ahead. Our existing people to people connections give us confidence about our forward co-operation – we have several Cook-Irelanders who will no doubt celebrate this milestone.”

Earlier this month, Prime Minister Brown together with Ministry of Foreign Affairs and Immigration (MFAI) Secretary Tepaeru Herrmann met with Minister Coveney in Sharm el Sheikh. They discussed various bilateral and regional matters including the urgent need to build climate change and disaster resilience in the Pacific through fit for purpose funding mechanisms that ensure Pacific ownership and deliver tangible impact on the ground in a short space of time.

MFAI Secretary Tepaeru Herrmann says there are more similarities between Ireland and Pacific nations like the Cook Islands than one might think.

“While Ireland is an island nation in Europe, on the other side of the world, they, like us, are committed to urgent climate action and are walking the talk with climate finance. We both have a history of emigration stretching back generations and are geographically isolated from key economic markets. We also both have long maritime traditions and the sharing of customs through storytelling and singing of songs have been part of our communities the world over for generations.”

In May 2019, at the Asian Development Bank (ADB) Annual Meeting in Fiji, Ireland announced a €$12 million single donor fund aimed at building climate change and disaster resilience in the Small Island Developing States (SIDS). Of the 14 Pacific SIDS that are members of the ADB, the Cook Islands is amongst a handful that have been able to secure funding from the Ireland Trust Fund (ITF). In May 2022, the ADB approved US$700,000 from the ITF for the Cook Islands which has been allocated towards the Cook Islands Water and Sanitation Project being overseen by the Ministry of Finance and Economic Management (MFEM).

During the bilateral meeting in Sharm el Sheikh earlier this month, Prime Minister Brown, on behalf of the Pacific and the South Pacific Regional Environmental Program (SPREP) presented Minister Coveney a vaka replica in appreciation of Ireland’s continued commitment and partnership with the Pacific on climate action.

“Ireland is one of only a few countries with a dedicated SIDS Strategy that lays out tangible actions and have demonstrated scaled-up support for SIDS,” said Secretary Herrmann. “Our Pacific region comprises small and dispersed countries with small populations and limited economies. This means climate action financing, such as the Ireland Trust Fund, has in the Pacific context, the potential to be extremely transformative with early tangible impact on the ground.”

“As a member of the European Union (EU), Ireland also has the potential to influence the development and implementation of EU policy on climate action and finance. Further, through its current role as a member of the United Nations Security Council (UNSC), we hope Ireland will continue to draw attention within the UNSC to the climate and security nexus as a serious threat to international peace and security, despite the concerns of certain UNSC member states as to the relevance of discussing climate at the UNSC.”