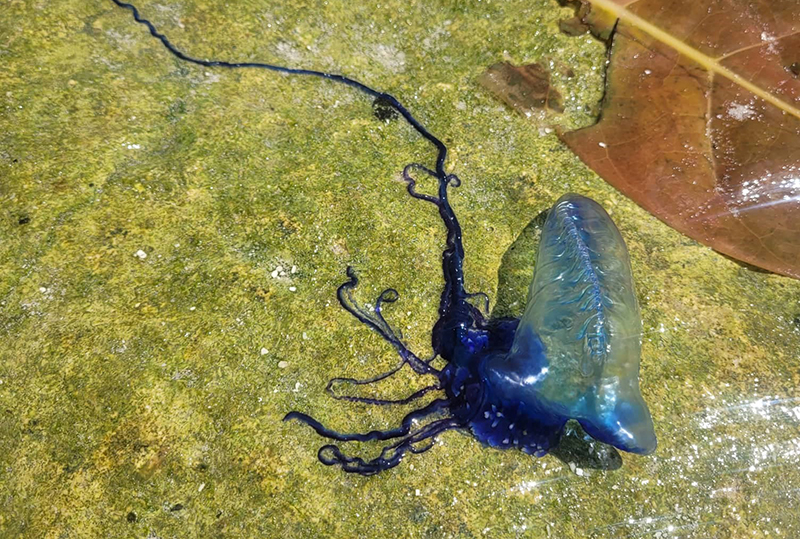 One of the blue bottle jellyfish washed up between Fruits of Rarotonga and Charlie’s Café. Picture: Kimbo Shan/22100617

Bluebottle jellyfish which can deliver a nasty sting has been washing up on Rarotonga’s east coast this week.

Rarotonga resident Kimbo Shan said she saw about 15 of the jellyfish on the beach between Fruits of Rarotonga and in front of Charlie’s Café on Wednesday afternoon.

“I’ve just seen them only periodically previously but not as many as this time around,” she said.

Shan said the jellyfish have definitely put her off swimming.

“I’ve been stung once before by these bad boys. Never again and I definitely wouldn’t want my little girl experiencing it either.”

Shan said she warned a family preparing to snorkel at Fruits of Rarotonga that the jellyfish were about.

Marine biologist Dr Teina Rongo said the bluebottle jellyfish sting was painful, adding they would have washed up from the consistent trade winds.

“Normally it’s the wind that brings them to our shores,” Rongo said.

“These are surface organisms so they rely on the wind to carry them around.

“It’s been breezy in the past couple of weeks, it’s consistently coming from the North-East to the South-East.”

Given the current wind direction, the bluebottles were appearing on the windward side of the island, in Muri and Titikaveka, Rongo said.

“You wouldn’t find it in Arorangi Nikao area.”

Rongo was in Aitutaki last week and also saw the bluebottles there.

“Most of the time when we go into the summer months, we get the winds from the north.”

The bluebottles have stinging cells called nematocysts inside their long tail.

Rongo has been stung before while snorkelling and said his lip swelled up.

To treat the stings, immerse the skin in hot water – not vinegar or urine which is sometimes recommended for other jellyfish stings.

Rongo said vinegar would aggravate the sting “but warm water breaks it down”.