Leaving no one behind: Better production, better nutrition, a better environment, and a better life 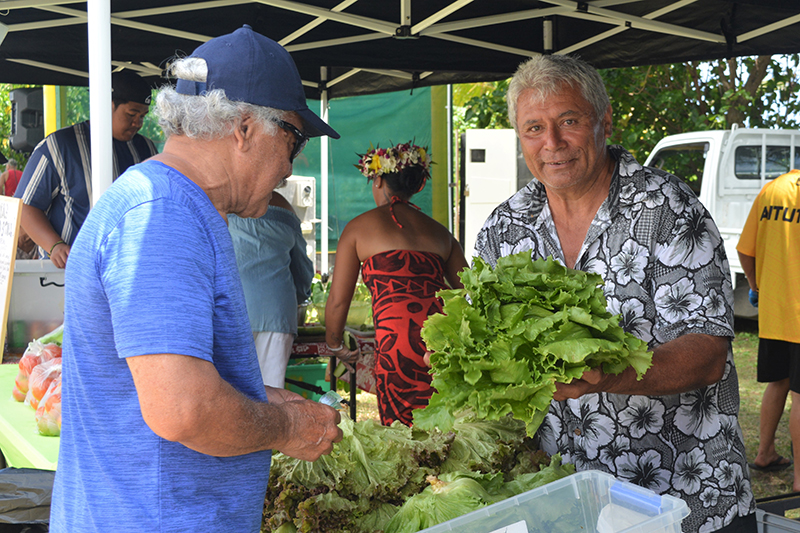 Hordes of people flood Terevete Park to get their hands on fresh local produce at the World Food Day event.

The international event spearheaded by the agriculture arm of the United Nations was celebrated locally on Friday.

One of the stalls was Matavera Farms which sold tomato paste, free range eggs and honey.

Matavera Farms marketing manager, Martishar Tautu, who was manning the stall, says the business had been making honey for two years which started originally as a hobby.

Matavera Farms was launched in 2020 when Covid-19 closed the Cook Islands borders. The business started by going to the Saturday market to sell produce but it wasn’t financially sustainable until they put to market a weekly $20 vegetable pack delivered to homes – which is still in operation.

Tautu recognises honey, free range eggs and the value-added products they have for sale is different to what a lot of other growers are doing.

“For us we didn’t want to be competing with other farmers so we had to try and use our intuitive to think of some other way to make money,” Tautu says.

In the middle of the field is Papaaroa Adventist School with produce grown by the students.

School principal June Hosea sold the goods on behalf of the students, who are on holiday, and says the school came on board to teach students to be more self-sufficient.

“We want to encourage our children to learn how to plant and grow their own food rather than rely on someone else to plant their food for them,” Hosea says.

“We found they appreciate spending time outside of the classroom and it makes going to school more fun.”

Papaaroa Adventist School originally was a boarding school with farm land backing on it. Back then, Hosea says students would plant.

“Now it’s a day school and we still want our students to plant.”

Hosea says she wants the students to learn other parts of Cook Islands life, like carving and the history of their ancestors, and growing was part of that.

Hosea hopes it will teach students to appreciate what they have.

“So they won’t always think that the grass is greener, because I’ve lived in New Zealand, I’ve lived in Australia, I’ve lived in Papua New Guinea and honestly there is no place like home, and our children need to learn to appreciate and utilise what’s here.

“That’s why we’re doing this to get them away from the screen, they spend so much time on their gadgets and don’t realise there’s a whole world out there waiting for them.”

Ina Tuatai was selling succulents, herbs, vegetables and garden plants at her stall with her daughter in-law, daughter and granddaughter.

“I was injured in an attack and stopped working, it’s kind of been a little bit of therapy and it’s just taken off from that,” she says.

Tuatai was selling pottery at her stall which started as a form of therapy, she says.

At one of the ends of Terevete Park, Margaret Tangimetua was selling lettuce, capsicum and flowers on behalf of her sons.

“He started planting plants and flowers during the Covid period, during that time he didn’t have much work so he got into planting,” shares Tangimetua.

“So something great came out of that Covid, something new.”

Harry Tamarua has been a grower for over six years and felt the brunt of the Covid-19 related border closure.

“We had to reduce planting,” Tamarua says.

“Selling wise we had to go and take the product to the customer.”

“It’s fun planting, at the end of the day you get your result on the table people are happy and I’m happy.”

The theme for this year’s World Food Day is “Leave no one behind. Better production, better nutrition, a better environment, and a better life”.

Ministry of Agriculture head, Temarama Anguna-Kamana told Cook Islands News: “All the global challenges that are surrounding us there’s going to be an impact on farming imports. There will be an increase in the cost of imports and it could affect our trade with regards to food that is imported into us, so for us it’s like, let’s stand together, support the farmers and the people involved in the bringing of food from overseas.

“We need to stand together and ensure that we always have food available.

“We just need to look out for each other and ensure that no one suffers malnutrition or hunger.”