Home owner calls on those damaging properties to ‘stop’ 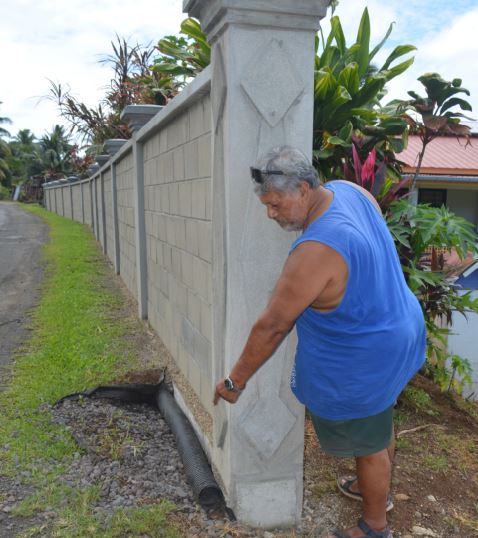 George Apera of Vaiokura in Betela in Arorangi shows how his drain hose was pulled back. 23012405

An Arorangi resident is calling on those who are damaging other people’s property to stop.

George Apera of Vaiokura in Betela made the plea after he saw that the drain hose that was connected to his newly constructed concrete fence, was pulled back two-metres from where it was originally covered and sealed - in front of the fence.

He said he saw this on Monday morning when he was at work.

A disappointed Apera said he did not know what the culprits wanted with the drain hose.

He said he did not lodge a complaint to the police but alleged the culprits probably wanted to find out what was under the hose- but they should have put it back.

“I spent a lot of money on my new fence,” he said.

Apera says: “Leave the property alone, if it is not yours, don’t touch it, don’t damage it, it’s not yours.”

On Monday, Makea Karika George Ariki raised his disappointment with the damages done to the Makea Karika Palace fences over the weekend. He suspected they were damaged by some “reckless boys” returning from the nightclubs early Sunday morning responsible for the damages to the picket fences.