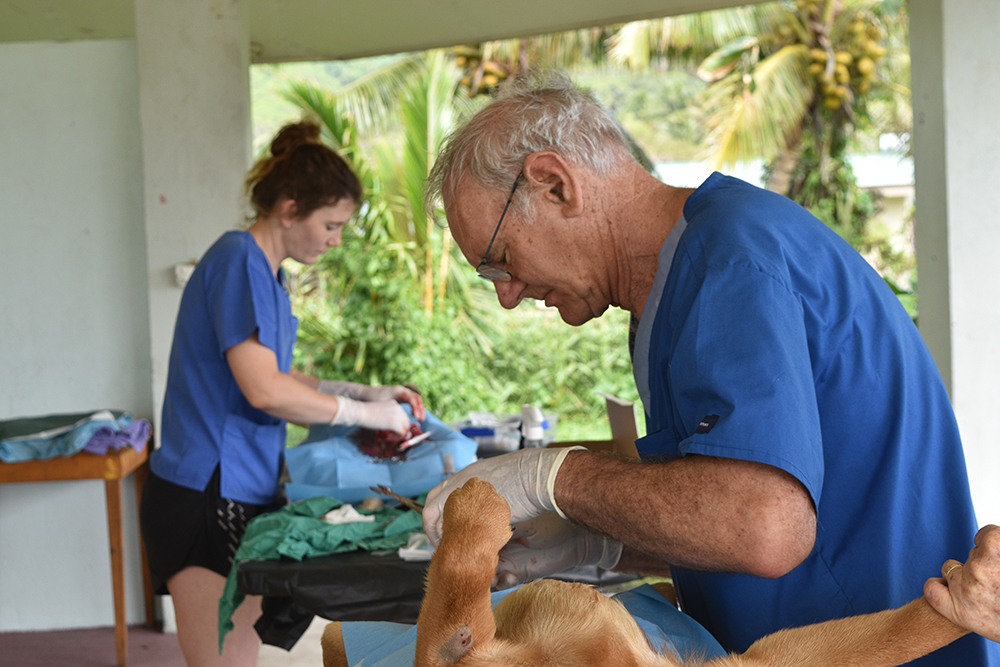 Vets Harriett Garvey and Andrew Nicholson operate on dogs at the desexing clinic in Ngatangiia in September. PHOTO: AL WILLIAMS/22092815

An animal desexing programme designed to tackle dog issues on Rarotonga looks set to continue despite ongoing challenges in getting the matter under control.

Te Are Manu, under the umbrella of the Dog Registration and Animal Control Committee, has just completed its second round of clinics on the island – 20 in total across the punas.

An estimated 350 dogs have been desexed across the 20 clinics, of those 150 were females. The service is free of charge.

The numbers fall well short of the 2640 dogs surveyed in 2021, of which 53 per cent had been neutered and registered.

In July this year, then Tourism Minister and Committee chairman Patrick Arioka told Cook Island News the programme was being stepped up, adding dog owners had until the end of October to get their dogs registered, or else would be subject to a fine or could even have their dogs destroyed.

Just a month earlier reports of a dog attack on a three-year-old on Rarotonga prompted the dog control committee to step up their work against stray or violent dogs.

It was then confirmed by police the desexing of dogs is a prerequisite to registration.

On Wednesday, committee member Christian Mani said continuity of the programme is an effective way of managing the dog population on the island.

“A sub-committee are currently putting together a proposal to ensure the continuity of the desex clinics and will present their proposal to the committee at their next meeting scheduled for October 5,” Mani said.

“For Rarotonga, the plans are to continue with encouraging new dog owners and current dog owners to have their dogs desexed.

“For the Pa Enua, Te Are Manu and SPCA will be visiting the Pa Enua to provide veterinary services and also provide desex clinics to the communities in the Pa Enua.”

Te Are Manu vet Dr Michael Baer was at the Ngatangiia clinic yesterday completing the second round of desexing programme.

He was supported by four vets and a couple of nursing staff.

Dr Baer said they are working in close partnership with the SPCA and the committee.

“There is still a lot of work to be done, we need to consolidate the gains we have made.”

“It stretches our resources as we are already at capacity.”

Dr Baer thanked all those, including 15 vets and a dozen nurses who had volunteered.

The Dog Registration and Animal Control Committee is made up of representatives from key organisations including the Cook Islands Police Service, Ministry of Agriculture, Te Are Manu (Cook Islands) Inc., Cook Islands SPCA and Cook Islands Tourism.

Each organisation is prompted by the desire to achieve their common objectives to ensure that the animal issues in the Cook Islands are collectively addressed.