Old-growth trees cut down to make way for beautification project

Thursday 27 May 2021 | Written by Alana Musselle | Published in Environment, National 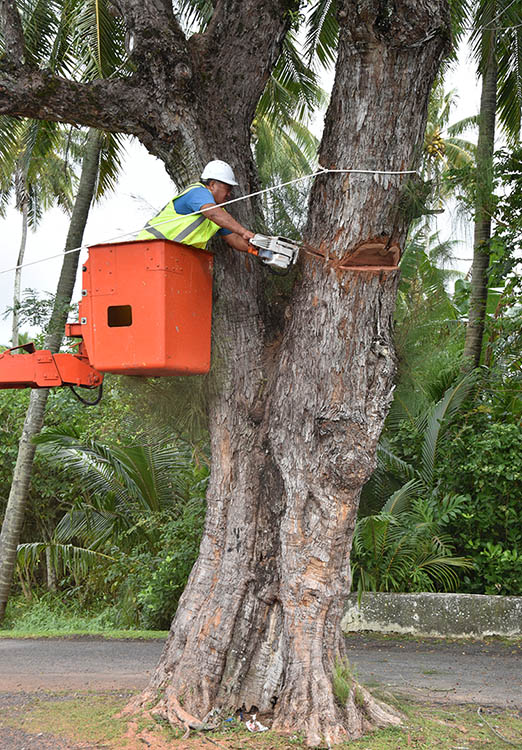 The first ironwood tree being cut down by T&M Heather Contractor at the Avarua Sinai Hall. - 21052601

The Avarua CICC Church proceeded on Wednesday with cutting down six ironwood (toa) trees in preparation for what it described as a beautification project, which it expects will commence in two years.

The beautification project has been planned by the church to celebrate the 200 years of Christianity arriving in Rarotonga. According to the church, some of the trees are standing in the way of this project’s success.

Attempts to begin any tree cutting on Wednesday last week were interrupted by two landowners from the Makea Nui line who showed up to defend the ancient trees, hoping to at least come to a compromise. The land was donated to the church by the Makea Nui family.

The two parties were able to come to a compromise, agreeing that six trees will be removed and five will be preserved for the sake of history.

Clerk of the Parliament Tangata Vainerere, who acted as a mediator for the two parties, said that although the beautification programme will not take place for another two years, the trees need to be cut now so that the roots have time to dry and be pulled out in a timely matter.

Vainerere expressed his concern that the two parties were both angry simply because of a lack of understanding. He said the previous landowners were not given any consideration and therefore did not understand the church’s reasoning behind removing the trees.

“These misunderstandings are why I am here as a mediator to bring the two sides together and agree on a compromise,” said Vainerere.

Noeline Browne, who strongly opposed the removal of the trees, said: “We have lost the battle but we do not want to lose the war.” Browne was present last week at the site with her sister Diane Browne Holford.

She expressed her deep sadness for the loss of the age-old trees. “We understand this is no longer our land but nevertheless we are grieving the loss of these trees which have earned their place in our country’s history.”

Diane Holford was “somewhat happy with the compromise” the two parties managed to reach, and was relieved that they were able to sit down calmly and discuss the matter without any aggression.

“I am not completely happy but I am glad that they are leaving at least five of the trees here to commemorate the past,” she said. “However, in the future the church needs to understand the importance of giving more consideration to the public. If we did not come and make an effort to preserve these trees they would have gone ahead and cut down everything without consulting anyone else.”

Alistair Macquarie, another descendant of the Makea Nui family line, joined Browne and Holford to witness the falling of the trees on Wednesday.

“At the end of the day, it is the people’s church and no consideration was even given to them. You do not go cutting out parts of our history without consulting people or not explaining what is going on. There needs to be more consideration given to others who deserve a say.”

Considering the age of the trees and the size, I am surprised that they are not being used in the construction of the church. The price of lumber in North America is astronomical. Cutting down massive trees and not using them appropriately is a waste of resources .