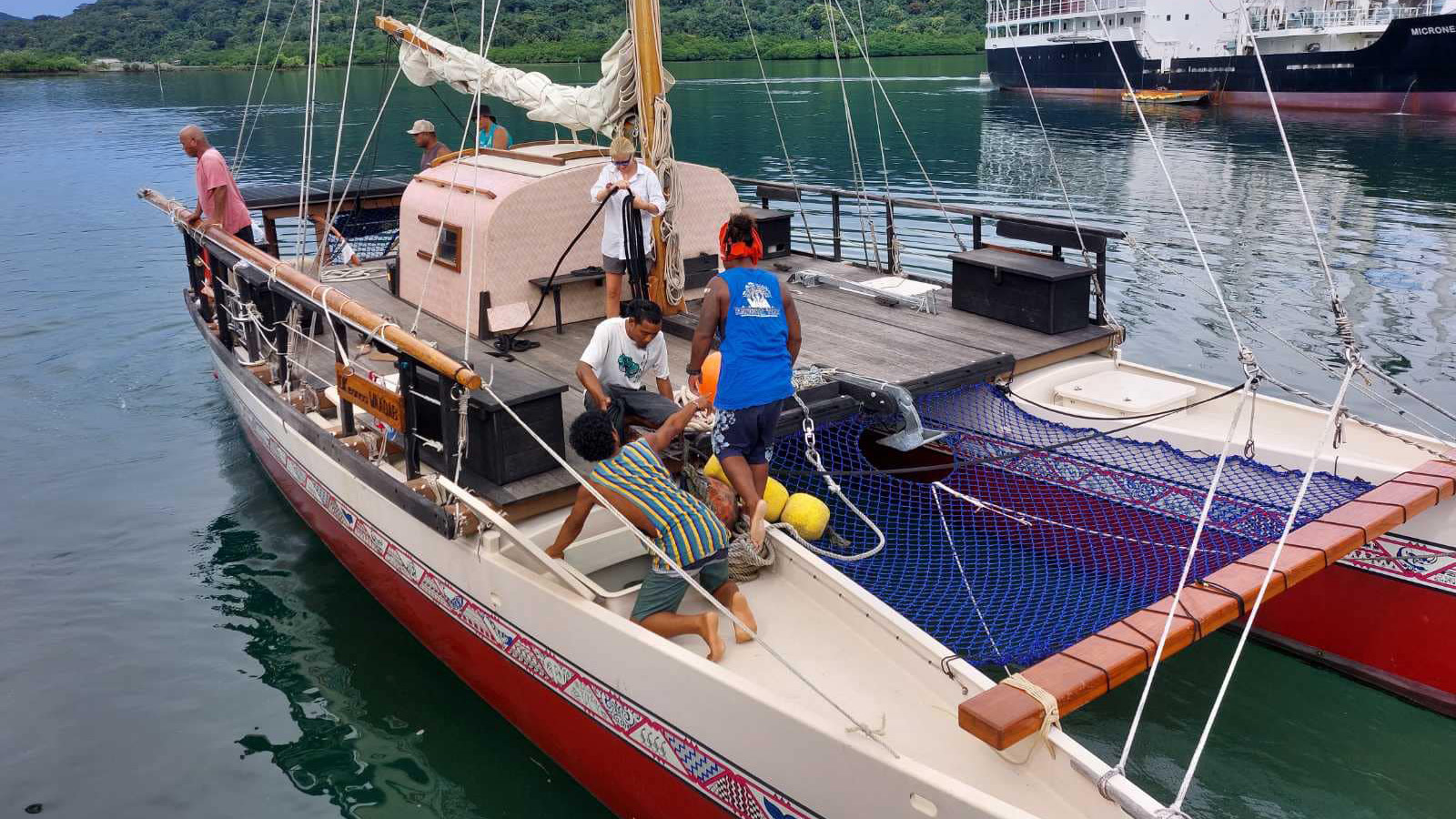 The vaka which left Pohnpei, Federated States of Micronesia, on September 10 for the 3000 nautical mile voyage, will be handed to Te Puna Marama Voyaging Foundation.

The Foundation is planning a low key traditional welcome for the crew on this historical occasion, to bless the vaka and crew on arrival.

Vaka Motu is under the command of Pwo master navigator Captain Jerry Joseph of FSM.

The vaka, to be used as a training vessel in the revival of traditional voyaging skills, made a stop in Samoa earlier this month before making its final journey to the Cook Islands.

After spending about a week in Samoa, members of the Samoa Voyaging Society farewelled the Vaka Motu Okeanos Waa’Qab from the Matautu marina in Apia earlier this week.

Captain Karl Steffany from Aiga Folau presented to the Captain of Waa’Qab, a rock with an “afa” sennit tied around it, as a commemoration of their visit to Apia.

“This rock, I always see it when I go fishing at Mulinu’u. I picked it up about two months ago and it constantly changes its colour from time to time,” he said.

Captain Jerry Joseph told the Samoa Observer that his crew are heading to Rarotonga to return the vessel that he was gifted with, as he has been given another vessel.

“I am returning it to the voyaging society of Cook Islands as they gave it to me years ago. But I have one now, so it is practice to return the gift to our sisters and brothers when we have enough,” Joseph said.

“I also suspect as is custom that the voyagers there will be welcoming us on a traditional platform of exchanging important messages and heartfelt tributes.”

Crew member Pounamu Tipiwai-Chambers, in a Facebook post, thanked Aiga Folau for hosting them and gifting them supplies.

“Upolu is fading behind us, and the last of the internet connection has gone, but we are happily on our way home ... I have just managed to unpack the last of the many amazing boxes and bags of treats that were gifted to us this (Monday) morning, and looking at the kitchen alone, I feel that we have more food on this leg then the last!

“Being in Samoa was absolutely beautiful! From the vast landscape itself, to the hospitality by the Samoan Voyaging Society, the Cook Islands community, as well as the many new and old friends and family. We thoroughly enjoyed the quick pit stop, and little glimpse into Samoan life, but I am definitely ready to get home now.

“We will forever remember how welcome and accommodated we felt, and look forward to doing the same in the near future. So far, there has only been a quick shower as we were exiting Apia Marina, which was a beautiful way to cleanse ourselves as we headed out into the realm of Tangaroa and Hinemoana.

“The rolling waves are once again the familiar and comforting feeling we have missed for the past few days, and the sun is beaming down.”

Vaka Motu has a design based on a traditional Polynesian model and is the third built by Auckland’s Lloyd Stevenson Boatbuilders.

Described as the “work boat of the Pacific”, the vaka weighs nine tons and can accommodate 11 people and three tons of cargo.