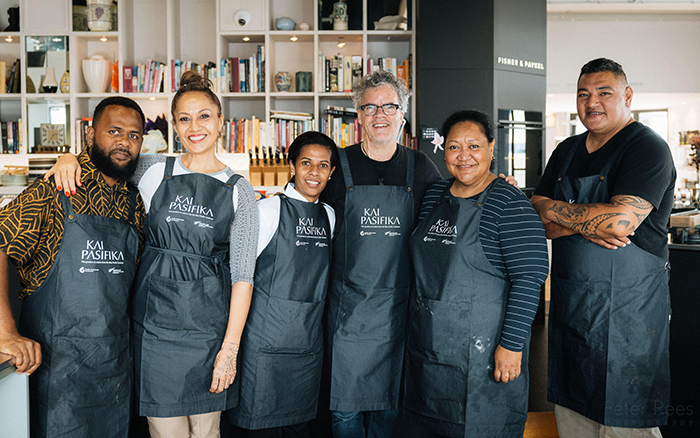 Cook Islands chef Rangi Mitaera-Johnson is mixing it with the best in the region during a celebration of food and community in Auckland.

Kai Pasifika celebrates the produce and cuisine of the Pacific continent with several high-profile chefs converging on Peter Gordon’s acclaimed Homeland Restaurant in Auckland this week.

On Tuesday the chefs created a five-course dinner celebrating the flavours of the Pacific Islands - guests included Ministers, Pacific dignitaries and VIP guests.

On Monday the chefs undertook a mystery box challenge, providing food writers with the opportunity to get up close and personal with Pacific ingredients, with guidance from the Pacific chefs to create their own masterpieces.

On Sunday the mystery box challenge saw New Zealand and Pacific chefs work side by side with a wide range of Pacific ingredients using their professional and cultural skills, knowledge and experiences to create specialty dishes.

The event is led by Pacific Trade Invest NZ (PTI NZ) in collaboration with the New Zealand Ministry of Foreign Affairs and Trade (MFAT), and Homeland – ‘the Food Embassy for Aotearoa and the Pacific.’

Mitaera-Johnson was contacted by New Zealand Foreign Affairs and Trade in a combined effort to promote Pacific product and produce - she has worked in kitchens for 25 years and now works freelance.

Glynis Miller, PTI New Zealand's Trade Commissioner said the event was about promoting the Pacific's unique products, telling the stories of its producers, and encouraging chefs to create a bond, whereby they can teach and learn from each other back in their own countries.

“It would be fantastic to see a twining arrangement coming out of this – something our food writers in the media industry could themselves participate and share.”