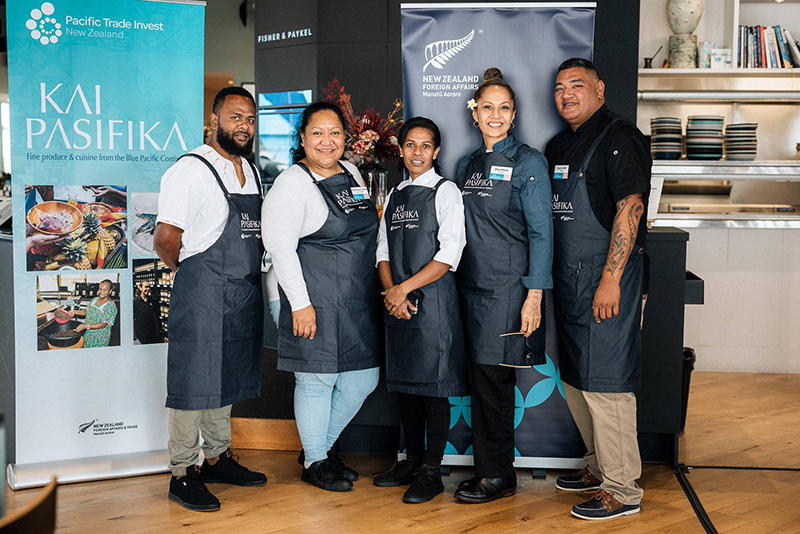 Rangi Mitaera-Johnson, second left, and some of the Pacific chefs she worked alongside. Homeland NZ/22100710

Cook Islands chef Rangi Mitaera-Johnson has described her experience at a celebration of food and community in Auckland as ‘incredibly full on with some of the finest chefs here in New Zealand’.

Mitaera-Johnsonhas reflectedon an intenseweek of mixing it with some of the best in the business.

“It’s great being surrounded by like-minded people who are so passionate about the food basket of the Pacific,” she said near the end of the week-long event.

“They were incredibly full on days with some of the finest chefs here in New Zealand from day one.”

On day one, the mystery box challenge saw New Zealand and Pacific chefs work side by side with a wide range of Pacific ingredients using their professional and cultural skills, knowledge and experiences to create specialty dishes.

“It was a very colourful evening and exciting creations made with products from around the region.”

On day two, the chefs undertook a mystery box challenge, providing food writers with the opportunity to get up close and personal with Pacific ingredients, with guidance from the Pacific chefs to create their own masterpieces.

“It was amazing and there were some incredibly diverse contributions to the palate that morning.

“In the afternoon we were asked to prepare Canapés for a cocktail evening with key trade buyers.”

By day three, the action was all on.

“We prepared a five-course dinner for diners who booked to be part of this very exciting journey of Pacific cuisine,” Mitaera-Johnson said.

“It was sold out within minutes of it being advertised online.

“The event was well attended by cabinet ministers.

“All diners enjoyed the event and food delivered for all to enjoy.”

The event was led by Pacific Trade Invest NZ (PTI NZ) in collaboration with the New Zealand Ministry of Foreign Affairs and Trade (MFAT), and Homeland – ‘the Food Embassy for Aotearoa and the Pacific.’

Mitaera-Johnson was contacted by New Zealand Foreign Affairs and Trade in a combined effort to promote Pacific product and produce – she has worked in kitchens for 25 years and now works freelance.