From the pristine environment to stray dogs: Cook Islands visitors reveal their likes and dislikes 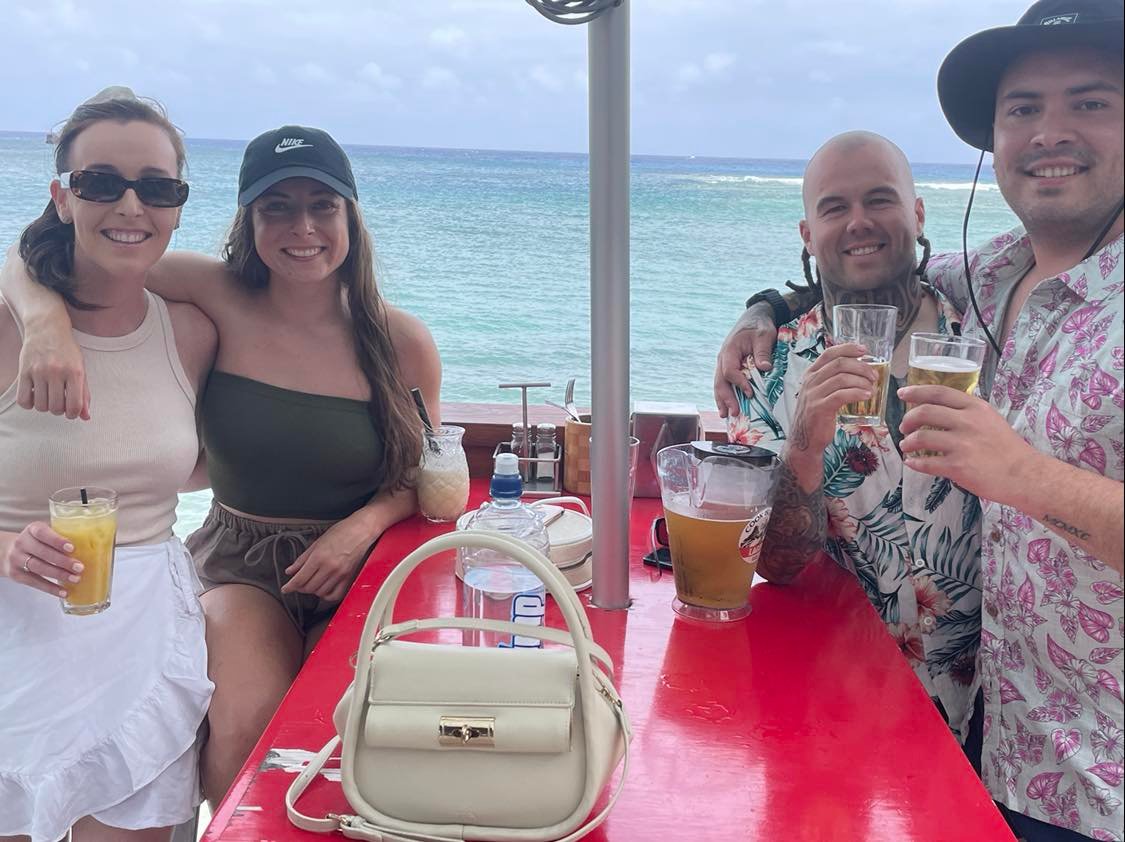 Michael Thomas and Brittany Graham with friends enjoy a drink at Trader Jack’s. 22102815

Tourists in the Cook Islands are still spending more and staying longer than before, but many have concerns about the environment and public infrastructure. Senior journalist Matthew Littlewood digs into the latest Cook Islands Visitor Survey report, and talks to visitors along the way.

The recently-released report – which covers the April to June 2022 period – collected 682 individual respondents to the survey, representing a total of 1242 adults and 158 children.

As a result of the border restrictions, nearly all (98 per cent) of visitors surveyed come from New Zealand.

Visitors are well educated (68 per cent have some form of tertiary education) with a relatively high annual household income (59 per cent earn over NZ$100,000 per year) and one visitor in five (18 per cent) earning over $200,000 per year. Well over half (57 per cent) of visitors travel with more than one companion, solo travellers are far less common (8 per cent)

When pre-paid spend and local spend are combined, it is estimated that each visitor brings $2554 to the Cook Islands economy (or approximately $295 per day). This figure is 35 per cent higher than NZ visitors of April to June 2019 period ($1896).

“That means people have more disposable income and splurge their money a lot more than they would otherwise. As a case in point, I’ve been noticing a lot more people deciding to rent cars, rather than take public transport, and a lot more people are taking day-trips to Aitutaki or booking beachfront rooms at our hotel.

“I expect this trend to die down a wee bit as we return to something resembling normality, but right now it’s still being felt everywhere – even the liquor stores are reporting higher spend than normal.”

One of the big drawcards of the Cook Islands, according to the survey was “the environment, cleanliness and weather”, with 55 per cent of respondents mentioning it as one of the best aspects of their stay.

“Words like ‘beautiful’, ‘warm, ‘tidy’, ‘crystal, ‘incredible’, ‘tropical and ‘amazing’ are used to describe the attraction of the local environment. Most comments here focused on the beauty and the cleanliness of the beaches and lagoons, the warm weather, the beautiful scenery, and the landscapes of the islands in general,” the report says.

Tourist Michael Thomas agrees with this. The 32-year-old is on his fifth visit to the Cook Islands.

“I was last here about four years ago, and not a lot has changed – in a good way,” Thomas says.

“I love how everything is on island time, and how warm everyone is.

“I’ve been to Fiji, which is pretty good, but I like how the Cook Islands isn’t as commercialised.”

For Brittany Graham, a New Zealander, this is her first visit to the Cook Islands.

“It’s just been so refreshing.”

Tourist Abraham Angoika, who is visiting the Cook Islands for the first time, says he is looking to savour all the different varieties of food.

“I’ve only been here a couple of days, but I’m looking forward to exploring the place, the environment is very friendly,” Angoika says.

According to the survey, rubbish and natural environment care were mentioned as a least appealing element of the visit to the Cook Islands.

Scott says she is not surprised with some extremes in responses from the respondents.

“I guess it comes down to perspective,” she says.

“Compared to much of the Pacific, we are very clean, and Covid-19 allowed the environment to reset itself a wee bit, especially at the Muri Lagoon, which is looking really good at the moment.”

“There have been people and organisations with all sorts of ideas, and I’m confident something can be done to address it.”

Over a third (34 per cent) of comments expressed the warmth and welcoming nature of local people as most appealing aspect of the travel experience. Key words that dominated the responses include “friendly”, “helpful”, “kind”, “welcoming”, “lovely”, “beautiful”, and “cool”.

However, there was concern among respondents about the quality of public services and infrastructure, with 22 per cent saying it was the least appealing aspect of their stay.

Infrastructure Cook Islands was approached for comment – Cook Islands News asked them what the organisation thought about these concerns, and what some of their bigger projects have been. But it did not receive a response.

There were also complaints about stray animals, with concerns about dogs dominating complaints.

“Although I didn’t mind the dogs, I did find at night that they seemed a bit more aggressive and would sometimes rush at you on your scooter,” one of the respondents said in their response to the questionnaire.

“Dogs – need to get those under control both barking incessantly at night and roving in packs. Over the years visiting this issue has got worse and worse”, said another.

Mosquitos and the sound of roosters also perturbed visitors, with one visitor complaining about the “12, 1, 2, 3, 4, 5am wakeup calls from the roosters”.

Scott says there is a lack of coherent approaches to the stray or wandering dog issue, adding it’s definitely something that the government needs to address.

“There have been action groups and initiatives such as de-sexing programmes for dogs, but it will remain a big problem unless there is some unified action.”

Overall, Scott says the Cook Islands tourism market is “healthy”, but there are genuine concerns about the upcoming months with a relative lack of flights being a key issue. “But we are a drawcard. Peop