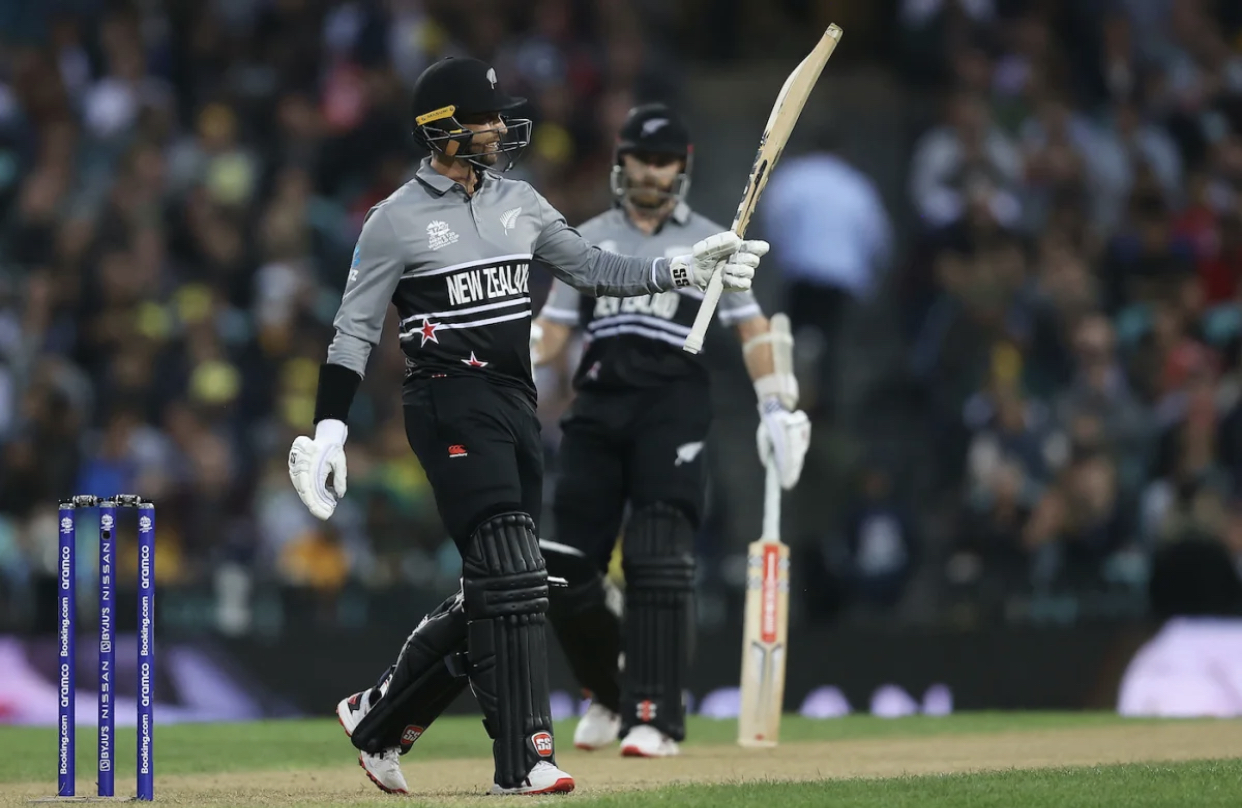 The opening night of the T20 World Cup Super 12 stage saw hosts and defending champions Australia being hammered by their trans tasman rivals New Zealand in Sydney whereas England made heavy work of Afghanistan's challenge in Perth. Rahul Patil analyses all the action from Sydney.

Whenever New Zealand plays Australia in Australia the Kiwis are always reminded about their poor record against the Aussies. This criticism is justified to some extent as New Zealand teams of the past have often fallen short of playing to their true potential against their trans tasman rivals. But this NZ team is a bit different. At least seven of the squad of 15 do not carry any baggage of the scars of the past.

When Finn Allen smashed Mitchell Starc for 14 runs in the first over of the game it sent a clear message to the 35000 fans at the SCG; New Zealand were here to win. Wellingtonians Allen and Devon Conway (pictured) raced to 56 of 4.1 overs in the powerplay when Allen departed. A period of consolidation followed by a strong finish saw New Zealand post a mammoth score of 200 in their allocated 20 overs. Conway carried his bat through the innings to finish 92 not out and deservedly picked up the man of the match award. On current form Conway is currently New Zealand’s most consistent all format performer and will be the key to New Zealand's chances in the tournament. The selection of the dashing Finn Allen ahead of the experienced Martin Guptill paid rich dividends and credit must be given to the blackcaps team management for it.

In stark contrast to the New Zealand innings the Aussies just never got going. When you are chasing a total of 200 in a T20i game you need a lot of things to go right for you. You need a good start, you need someone in your top 3 to get a big score and lay a platform for the finishers in your side to come in and express themselves. Australia just kept losing wickets from the get go. A power play of 37 for 3 meant that they left the rest of the batting to do too much. They crumbled under the pressure of the scoreboard and ended being dismissed for 111 in 17.1 overs.

A 89 run loss in the first match of the world cup in a tough group will really hurt the aussies. Their net run rate now sits at -3.534 and they will now have to win all their remaining matches while making sure that the margin of victory each time is substantial. The blackcaps were superior in all 3 departments of the game and the way they executed their plans it looked like they also out thought the world champions. With the West Indies not making it to the super 12’s one of my predictions has already gone wrong. I predicted Australia to be one of the semi finalists from this group but this massive defeat definitely makes it hard for them. Just goes to show that anything can happen in T20 cricket.

At some stage in the tournament Afghanistan will surprise a couple of the top teams but Perth is unlikely to be the venue that it will happen at. Batting first they struggled to come to terms with the pace and bounce of the wicket and also with the dimensions of the ground. While Mark Wood cranked up the pace it was Sam Curran’s swing, seam and guile that reaped the rewards with a 5 wicket haul for a miserly 10 runs becoming the first Englishman to take a T20i five-for. England caught everything that came their way in an outstanding fielding display.

112 was never going to be enough against a strong batting line up like Englands but Afghanistan made them work hard for the victory. The spin trio of Mujeeb, Nabi and Rashid Khan bowled 11 overs between them and picked up 3 for 55. Just when it looked like things could go horribly wrong for England, the aggressive Liam Livingstone came out with intent to win the game for England. Afghanistan would have loved another 20 runs on the board whereas England would have ideally liked to finish the game a lot earlier to boost their net run rate. Sam Curran picked up the man of the match award for his efforts with the ball.