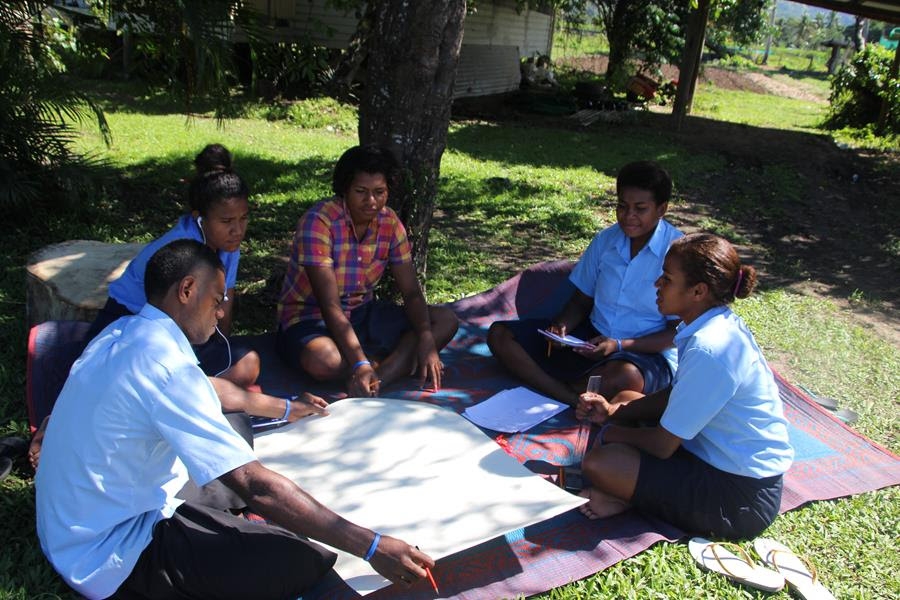 Fiji - How do you upskill Pacific communities to take care of themselves during extreme weather events? And how do you get them to harness their traditional knowledge and skills in adapting to climate change?

That’s been one of the aims of a European Union funded project which has been mainstreaming climate change adaptation, and sustainable energy in tertiary curricula in 14 Pacific Island countries and Timor Leste since 2014.

The European Union Pacific Technical and Vocational Education and Training on Sustainable Energy and Climate Change is a EUR 6.3million (FJD 16.23million) project implemented by the Pacific Community in partnership with the University of the South Pacific (USP) since 2014.

At the outset, the project conducted training needs and gaps analysis for the 14 Pacific members of the African, Caribbean, and Pacific Group of States and Timor Leste to determine what skills were urgently needed in the areas of climate change adaptation and sustainable energy.

As a result, the project in collaboration with the Fiji Higher Education Commission developed regional qualifications in Resilience (which combines climate change adaptation and disaster risk reduction); and Sustainable Energy – world firsts – in partnership with the respective national education ministries and departments in the 15 project countries.

In Fiji, for example, the project has supported the development of National Qualifications in Resilience Levels 1-4 to address a training gap that existed at undergraduate level. Certificates I and II are being delivered by national training institutes while Certificates III and IV in Resilience are delivered at regional level by USP Pacific Technical and Further Education (Pacific TAFE).

The EU PacTVET project has supported the Fiji Ministry of Youth to deliver Certificate I directly to a number of rural and remote communities in Fiji. Building on the knowledge acquired at senior secondary school level, Certs I and II look at the causes and impacts of climate change as well as adaptation using traditional knowledge and techniques.

For example, a traditional food preservation method such as cooking in earth ovens can be used to enhance food security alongside agricultural interventions such as intercropping. The training has also acted as a catalyst for community elders to pass on valuable knowledge and skills (that are increasingly being lost) to youth.

Certificates I and II also cover disaster preparedness and in this regard, communities are being encouraged to produce their own action plans after identifying the dangers and risks that may be present in their environments; and to review their decision making processes to include the needs of women and persons with disabilities.

“One of the communities, for example, determined that a separate space was needed to meet the needs of pregnant women in evacuation centres,” said Apenisa Tamani, Climate Change Education Advisor at GIZ. Tamani delivered the training alongside counterparts from the Fiji Ministry of Youth Training centre.

Meanwhile, USP TAFE has been delivering the regionally accredited 'Certificate III and IV in Resilience’ to a number of students from Pacific Island Countries, who are trained on hazard identification and risk assessment, institutional frameworks, cost benefit analysis for resilience projects, and workplace communications, giving the Pacific an expanded pool of regional expertise in this important field.

Upon completing Certificate IV, Tevita Fakaosi of Tonga, said: "Competency-based assessment is one thing I have learned where you provide evidence that you can do a particular task in a given situation/context. This will be useful when conducting training with the communities that I work with."

In the lead up to Europe Day 2020, we recognise the support of the European Union in helping Pacific communities become more resilient thru professional training, knowledge and skills,” said Stuart Minchin, Director-General, Pacific Community

“The European Union is proud to partner with the Pacific Community and the University of the South Pacific to equip the Pacific Islanders with the practical tools they need to tackle climate change, and to move towards more sustainable sources of energy. This is in line with the new top priority of the European Union, the Green Deal. Climate change disasters remain a huge challenge for the Pacific, as seen by the latest Tropical cyclone Harold which has created havoc in the Solomon Islands, Vanuatu, Fiji and Tonga including the loss of lives.

While the Pacific continues to struggle with the COVID-19 pandemic, climate change induced-disasters such as Cyclone Harold exacerbate the economic downturn. Now, more than ever, the private sector and community activities will be key to jump start the Pacific's economies post COVID-19" said Sujiro Seam, Ambassador and Head of the European Union Delegation for the Pacific.