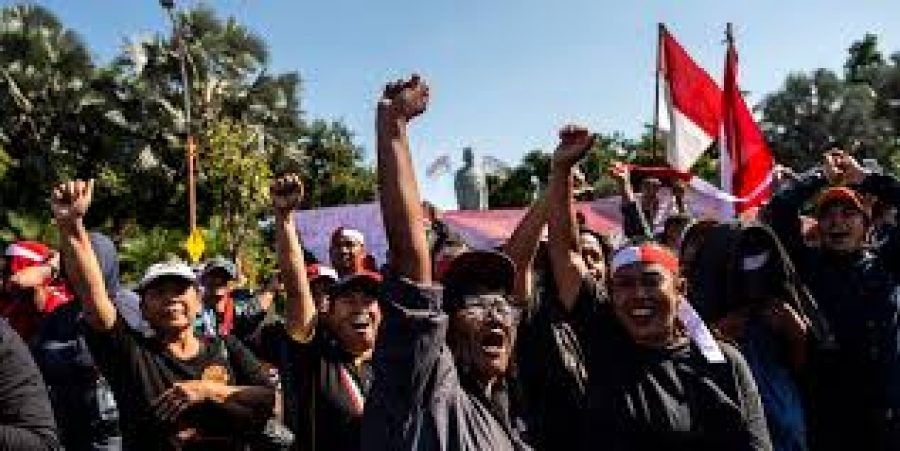 Since late 2018, West Papuan separatists have engaged in an escalating series of deadly skirmishes with Indonesian security forces as they renew a decades-old push for independence.

Indonesia has sought to suppress news of the ongoing conflict in West Papua, restricting foreign media from entering the contested provinces and even cutting off the region’s internet access at the height of the revolt.

Hundreds have been killed and local authorities say up to 45,000 Papuans have been displace, according to the ABC’s Foreign Correspondent – a number Indonesia disputes, suggesting only 2000 have fled.

It is a “secret war” being waged just a few hundred kilometres north of mainland Australia, the ABC reports.

West Papua has been under Indonesian rule for more than 50 years after being handed over in a United Nations-endorsed agreement during the Cold War.

In 1969, Indonesia held a ballot called the Act of Free Choice. But few more than a thousand hand-picked Papuans were allowed to vote.

Indonesia declared a unanimous victory. Most West Papuans felt robbed and an independence movement was born.

The Indonesian Government says its two easternmost provinces have been granted “special autonomy status with significant privileges to ensure the participants (sic) of Papuans in their development”.

But West Papuan activists say special autonomy is not the solution. They want independence from Indonesia and a “final democratic solution”.

“Indonesia tries to give us development,” West Papuan civil independence leader Victor Yeimo says. “That is not our aspiration.”

Snaking for thousands of kilometres through thick jungle and over bare highland peaks, the Trans-Papuan Highway will soon link the Indonesian provinces of Papua and West Papua.

Indonesia says it’s an essential infrastructure project that will improve transport and access to markets and services for people living in this region.

Carving a path through the remote highlands, the 4000km highway is seen by West Papuan independence activists as a move by Indonesia to exert more control over the region.

Many West Papuans fear the road will aid the Indonesian military and open up their resource-rich lands to exploitation by outside business interests, at the expense of local people.

In December 2018, the contentious highway project provided the spark which reignited a smouldering conflict.

Indonesia responded to the massacre by sending hundreds of police and soldiers into the area to hunt down those responsible for the attack.

Witnesses who fled the attack say they saw bombs rain down from Indonesian helicopters.

“They had a helicopter flying above us and they threw bombs,” Irian Kogoya told the ABC’s Foreign Correspondent.

Indonesia has denied using bombs but admits grenades were launched during the security operation.

Raga Kogoya, a local community leader in the central highlands’ main town of Wamena, says she’s stopped counting the dead and injured from the Ndgua attack.

She now takes care of traumatised children displaced by the fighting. Of the 220 people taking shelter near her village, most are children.

In a tragic consequence of the violence, children as young as 12 have been brought into the ranks of the independence fighters, led by 19-year-old Egianus Kogoya, Raga’s cousin.

The use of child soldiers is banned under international law.

“The kids don’t come because Egianus called them or asked them to, but those whose fathers got shot, tortured, then died – after that many would come out,” she says. “Many school children in Nduga have come out to join the war.”

Indonesia denies committing human rights abuses and says its soldiers are “a professional military organisation under a strict code of conduct and rules of procedures in conducting operations, including an obligation to respect and promote human rights”.

“Human rights principles have also been incorporated in the rules of engagement,” the statement from the Indonesian embassy added.

Human rights activists are now calling for the UN to be allowed access to Nduga to investigate.

For now, there appears no end to the conflict in sight. Some armed separatists say they will continue to target Indonesian civilians working with the security forces.

“We will kill, we will fight,” says Sebby Sambom, a Papua New Guinea-based spokesman for the armed independence movement. “We will continue to fight – no compromise.”

Kogoya is determined to alert the world about what is happening in her country, fearing the West Papuan movement will be weakened and the indigenous people “wiped out”.

“They are killed and slaughtered like animals,” she says.

It was a fresh outbreak of violence in August 2019 that saw Indonesia crack down on Papuans’ ability to get the word out.

After weeks of bloodshed, Indonesia ordered an internet blackout for West Papua. But video, photographs and written accounts continued to leak out.

Tensions had flared up earlier in August when a group of Papuan students were arrested in Surabaya, Indonesia, following reports an Indonesian flag was damaged outside the building where they lived.

Thousands of West Papuans, many of them students, took to the streets demanding an end to racism and calling for independence.

Indonesia deployed 6000 police and troops to West Papua and Papua to quell the unrest.

On August 28, Indonesian security forces opened fire on protesters in the town of Deiyai in Papua. Video of the incident was posted on social media.

Indonesia said the officers acted in self-defence and the crowd “ignored the pleas of the officers and attacked them with arrows”.

“The law enforcement officers tried to disperse the crowd with warning shots and tear gas but the attacks continued,” the Indonesian embassy in Australia said in a statement.

Law enforcement officers were “forced to fire, in line with their obligation to restore public order”.

But a local church report and local media said the protests turned violent after a Papuan youth was run over and killed by an Indonesian security vehicle.

Yeimo is part of a new and emboldened generation of activists demanding independence in West Papua. He is pushing for a referendum on West Papuan independence.

“For us it is better to fight before dying, for our dignity,” he says. “Fighting is a duty, a role of a young generation like me.”

Yeimo hopes for a peaceful solution and that the dream of West Papuan independence will become a reality in his lifetime.

“After the night, there will be sunrise in the morning,” he said. “The people of West Papua hope that one day the Morning Star will rise up.”