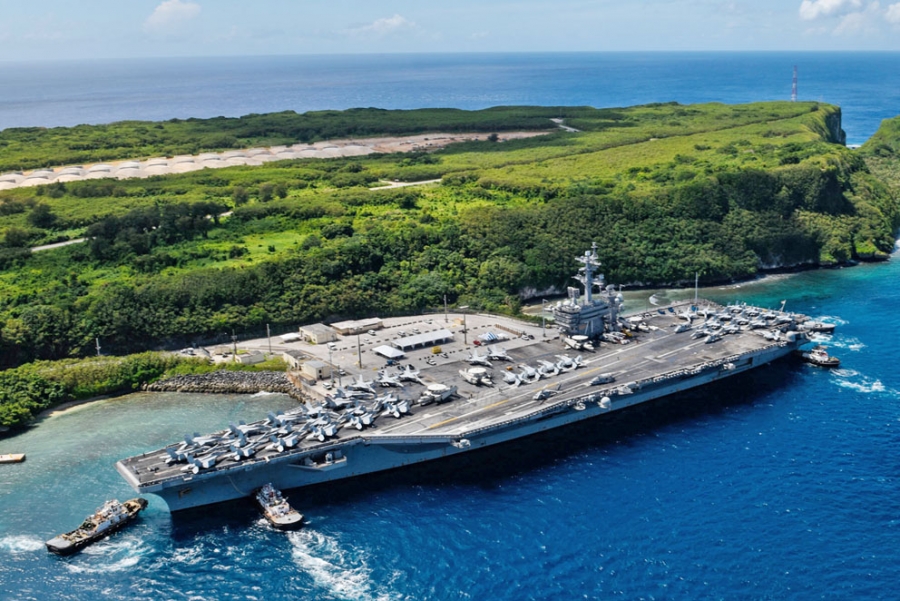 The US Navy is moving 4000 sailors off an aircraft carrier docked at Guam to combat a coronavirus outbreak on board.

Covid-19 is so far having its deadliest impact in the Western Pacific with deaths from the coronavirus reported in both Guam and the Northern Marianas.

PACIFIC– Guam’s Governor says one more person has died from Covid-19, taking the number of deaths in the US territory to three. An 81-year-old man is the third person on the island to die from the respiratory disease.

Overnight, the governor confirmed the US territory has 77 confirmed Covid-19 cases there – the worst outbreak in the Pacific, although the numbers on a US aircraft carrier are not included in the territory’s figures.

Guam’s government had earlier agreed to accommodate thousands of sailors from the US aircraft carrier USS Theodore Roosevelt in local hotels.

The ship is currently docked in Guam after scores of sailors on board tested positive for the coronavirus.

However, the US Defence Secretary Mark Esper intervened saying it is not time to evacuate the aircraft despite a letter from the commander of the ship pleading for help.

Its commanding officer, Captain Brett Crozier, had earlier pleaded for urgent help to stop the virus spreading through the rest of the vessel’s 4000 sailors.

The Navy declined to confirm exactly how many people aboard the ship are infected.

“We are not at war. Sailors do not need to die. If we do not act now, we are failing to properly take care of our most trusted asset – our sailors,” Crozier wrote.

The Northern Marianas government believes there’s community transmission of Covid-19 on Saipan, with the territory confirming four more cases in the territory on Wednesday, bringing the total to six.

The governor, Ralph Torres, also confirmed that the death of a 70-year-old man at a quarantine facility on Monday was because of the coronavirus. The four new cases include a 14-year-old, a 60-year-old and a 77-year-old.

RNZ Pacific’s correspondent on Saipan, Mark Rabago, said with one hospital, and samples still having to be sent to Guam for testing, the territory is unprepared for an outbreak and concern is mounting.

“As far as the hospital, there’s just no way that we can accommodate the projections like what they had in China, or Italy, or the United States,” he said.

The US Government last week announced that it would supply testing kits and equipment to the territory, but that is yet to be implemented.

A territory-wide curfew has been imposed to curtail the spread of Covid-19, and all flights in and out of Saipan have been suspended.