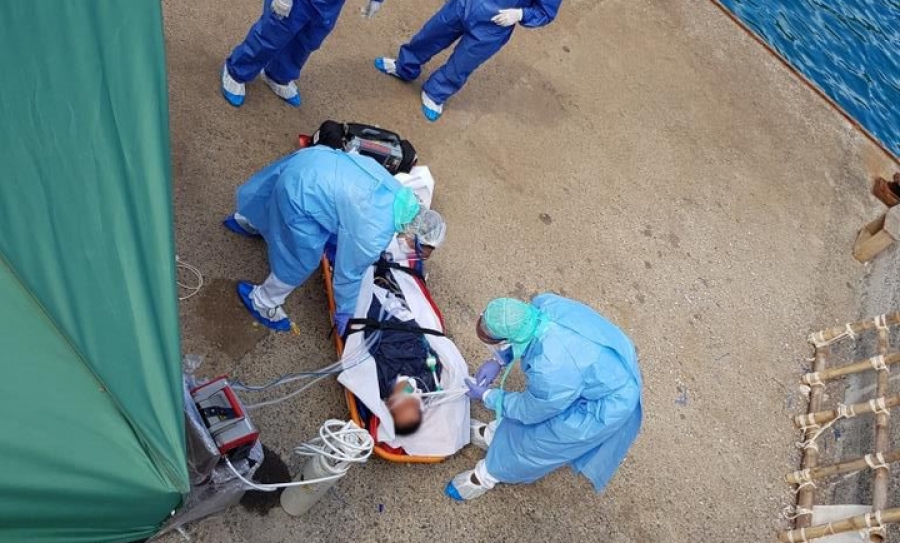 An Ecuadorian fishing vessels with a Covid-19 positive crew has left French Polynesia’s waters. The ship Charo had been off the Marquesas islands where a seriously ill fisherman was last week transferred to a rescue team which flew him to Tahiti’s main hospital.

The Ecuadorian fishing vessel Charo is now on the high seas near French Polynesia with 29 out of 30 of its crew infected with the Covid-19 virus – and there are suspicions of more foreign fishing boats in similar predicaments.

One News in New Zealand ran a report on the issue on Wednesday night, raising the question of human rights abuses aboard foreign vessels in the Pacific.

Pacific reporter Barbara Dreaver said another situation had arisen with workers on boats crewing for a Chinese-owned company.

“It’s not known whether the men were Covid-positive. The captains didn’t get help for them and their bodies were thrown overboard,” Dreaver reported.

“We condemn the inhumane treatment against our crew members working at the Chinese fishing company,” Indonesian Foreign Minister Retno Marsudi told One News.

Dreaver mentioned yet another vessel that has been fishing near Samoa, saying the Samoan government has held “grave concerns for some time”.

“We have the merchant shipping bringing goods and also some fishing boats, it is quite possible an infection could come to Samoa,” Samoan Prime Minister Tuilaepa Sailele Malielegaoi said earlier this month.

“We should be monitoring these vessels when they are out at sea and when they come in – test, trace, track – ensure that the disease is not entering into these communities through these fishing vessels and the fishermen on board,” he said.

Last week, French Polynesia came to the aid of a seriously ill suspected Covid-19 case on board the Ecuadorian fishing vessel.

One man was taken to Tahiti for urgent medical treatment, but the other 29 of the 30 crew – who all tested Covid-positive – were sent back out to sea.

The Charo, which had been at sea for a month, had anchored in an uninhabited bay off Nuku Hiva and reportedly none of its crew went onto the island.

The government in Papeete said the ship had been ordered to move back into international waters but to stay near Tahiti.

Fisheries consultant Francisco Blaha told One News: “The anxiety on board will be very high because you are on a floating piece of steel in the middle of nowhere.”

“Instead it’s often a transmission hotbed on board and captains often won’t get sick crew the help they need, driven by the need to stay at sea,” she said.

“You are talking in the Pacific alone, in the tuna fisheries, in the order of billions of dollars,” Cook said.

Dreaver said the situation is complicated by issues of human rights abuses on some foreign fishing vessels working in the Pacific.

“Add Covid-19 to the mix and you’ve got a very nasty recipe which has the ability to spill out into Pacific communities.”

She said some Pacific ports have very strong measures in place to prevent his happening, but others don’t – and “that’s the concern”.

She said that the Forum Fisheries Agency has announced in the last few days that they are withdrawing observers from foreign vessels because of the threat from Covid-19.